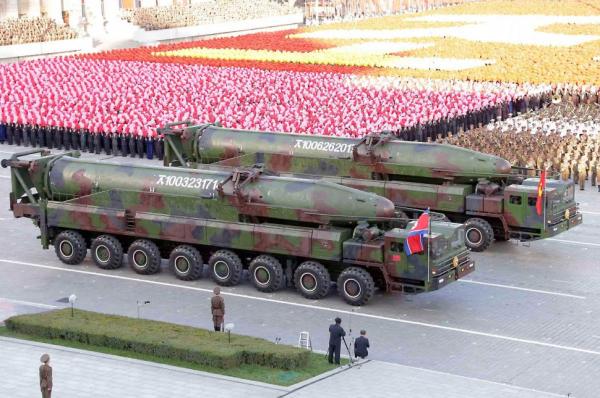 Life is not just a bowl of cherries, nor is life necessarily a tale told by an idiot, full of sound and fury. However, both life and politics can benefit from advice and warnings provided by tales and fiction. This is certainly relevant to the present political and military predicament as the U.S. Trump administration has to consider options to confront the challenging behavior of North Korea.

In 1935 the French playwright Jean Giraudoux wrote The Trojan War will not take Place, a work implicitly critical of the diplomacy that brought on World War I and could lead to World War II. There were options in the drama. Hector, the Troy military commander, considered that the pursuit of Helen by his brother Paris, would lead to war and destruction and therefore was undesirable. For other Trojans, war would be an opportunity for glory. At the extreme was fatalism if not apathy: the cynical Cassandra predicted war could not be avoided.

The U.S. and the world now is confronted with these options, and the pursuit of nuclear weapons as the realistic incarnation of the fictional Helen, the center of the drama. For the United States the stark issues are whether and in what way the ambitions, activities and threats of Kim Jong-un, the dictator and military leader of North Korea (NK) can be countered or if, fatally, the extent of his ambitions means that war with the U.S. is unavoidable.

The danger is evident even if a modern Cassandra is incorrect. NK has successfully carried out two nuclear bomb tests in 2016, and two Intercontinental Ballistic Missiles, ICBMs, tests in July 2017. It is considering, “carefully examining plans” for a missile strike on Guam, for an “environmental fire” around it. Guam is a missile target. Guam is a small remote island, 2,100 miles from NK, and 1,600 from Japan and the Philippines, but those of those countries are within range of NK missiles.

Guam, with 163,000 population, was captured from Spain in 1898, and since 1950 has been an unincorporated organized territory of the U.S. About one third of the island is controlled by the U.S. military. It houses the U.S. Andersen air force military base, a submarine squadron, B1 long range bombers, B52 bombers and fighter jets, and a Coast Guard group. Most important, Guam now has the U.S. Terminal High Altitude Area Defense, (THAAD), that intercepts missiles. The U.S. has also placed an anti-missile system in South Korea.

NK has a nuclear tipped missile, claiming a small nuclear warhead, that can strike the U.S. as well as its territories, arguing that its ICBMs are legitimate means of defense against the U.S., and the U.S. joint military drills with South Korea. After all, NK is technically still at war with both the U.S. and South Korea, since the 1950-53 war ended with a truce, not a peace treaty. It now appears to be threatening the U.S. with a medium to long range missile strike.

Previous U.S. administrations have been unable to curb the aggressiveness of NK. The response of President Donald Trump to this global belligerency has been the threat of retaliation with “fire and fury like the world has never seen.” The rhetoric is unusual and tough but Trump explains this is a strong message because Kim does not seem to understand diplomatic language, and this is a message he can understand. Above all, Trump has always been concerned with the issue of nuclear proliferation.

Indeed, Kim has shown little taste for diplomacy. Kim is a dictator, appearing as ruthless, provocative, volatile, and reckless. Much about his past, his exact birthdate and schooling, is confusing or unknown. What is known is that he assumed power at age of 27 in 2011. He became supreme leader of the Democratic People’s Republic of Korea (DPRK), after the death of his father. He became Marshal of the Korean People’s Army in July 2012.

In events related to consequent political rivalry within the country and his consolidation of power, Kim killed his uncle for “treachery” in December 2013, and had his brother assassinated in Malaysia in February 2017. Apparently, he drinks Johnnie Walker whisky and drives a Mercedes luxury sedan. He is proud to be a friend of Dennis Rodman.

When Kim first appeared on the scene, westerners were bemused by his bizarre hair style. Now bewildered by his belligerence the question for westerners arises, is he a maniac or a loose cannon? John McCain in March 2017 referred to him as a “crazy fat boy.” Crazy like a fox? Logically, his ambitions and objectives can be presumed and a case can be made as if they are rational: recognition of NK as a legitimate nuclear power as the U.S, is; continuation of the ability of NK to build nuclear weapons; acceptance of himself as the legitimate ruler of his country; removal of sanctions against his country; perhaps a genuine desire for a peace treaty with South Korea and the U.S.

No country wants war with NK, and no rational cause necessitates war, nor is anyone advocating regime change. In any case NK would lose any confrontation since the U.S, and allies are so much stronger and powerful. Trump has promised to renovate the US nuclear arsenal, making it modern, robust, and ready. The U.S. will have 6,500 nuclear weapons while NK has between 10 and 20.

Calm dialogue is essential even with a regime that has overtones of both Stalinism and Nazi behavior. It is frightening to see photos of large crowds of Kim supporters and protesters against sanctions, giving a disciplined salute similar to the Nazi salute with fists outstretched.

Nevertheless, a number of things are desirable to help resolve the issue. First, the U.S. must try to ensure that its allies in Asia put pressure on NK. Clearly, the best solution is a political one dealing with the nuclear issue in the Korean peninsula, and China should take a prominent role in diplomacy on this issue. Both sides must avoid words or actions that might escalate the situation. In this regard NK must halt its ballistic missile tests.

Sanctions against NK are appropriate as was decided by the UN Security Council unanimous 15-0 vote on August 5, 2017. Supposedly, the sanctions will cost NK $1 billion of its $3 billion annual export revenue.

It is imperative that China and Russia cooperate with the U.S. China must stop giving NK ballistic missile equipment and must stop helping money laundering. China was supposed in February 2017 to stop buying coal from NK but has not completely done so. This is an importunate opportunity for Russian President Putin to play a role, and begin the process of rapprochement with the US.

The allied countries must engage in pressure on NK to stop it helping Iran’s missile and nuclear program, and to remove NK engineers from Iran.

An unusual figure, Dennis Rodman, the former basketball star, “the Worm,” has now made six visits to NK, calling Kim a “friend for life.” During his most recent trip in June 2017 he presented Kim’s officials with a copy of Trump’s book The Art of the Deal as well as with Where’s Waldo? Rodman’s stated objective is to bring peace between the two countries. Let him try his diplomacy to give peace a chance and join his friend in jumping through the hoops.