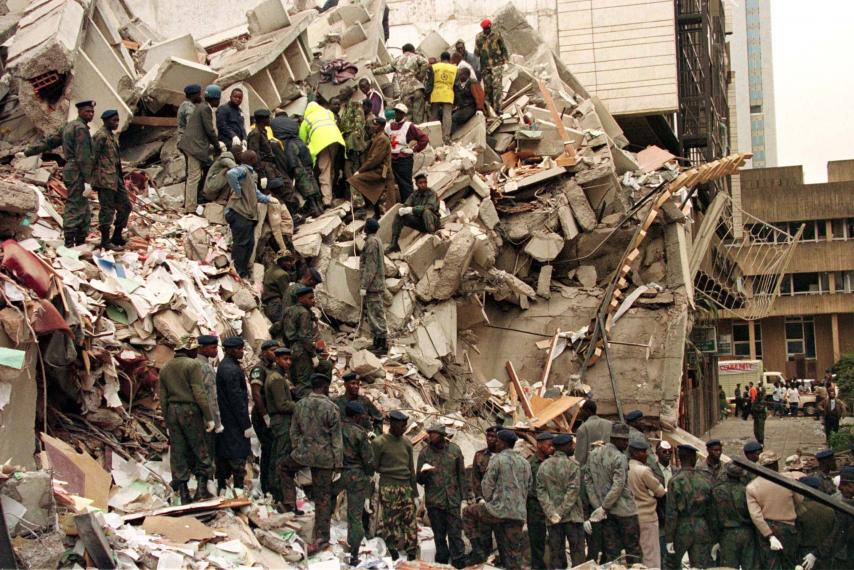 On Friday, July 28, 2017 the US Federal Appellate Court in Washington in a ruling affirmed a District of Columbia Appellate Court ruling granting an award of $7.3 billion against Sudan. That was compensation for  US and potentially non-US African victims in the 1998 Al Qaeda bombings that destroyed two US Embassies in the east African nations of Kenya and Tanzania. The Federal Appellate court ruling comes near the 19th anniversary on August 8, 1998 of the “simultaneous bombing at US embassies in Nairobi, Kenya and Dar es Salaam, Tanzania, killing 224 people. More than 5,000 were wounded. Twelve of those killed in Kenya  were US citizens.” Sudan and Iran had been implicated in providing sanctuary, funding and training bases for Osama bin Laden and Al Qaeda terrorists,12 of who were indicted. Sudan continued funding Al Qaeda, after the alleged departure of Bin Laden in 1996.

These attacks were allegedly retribution by al Qaeda for US coalition forces “despoiling the holy lands” of Saudi Arabia during the First Gulf War in Kuwait against the regime of the late Iraqi strongman Saddam Hussein. The African Embassies bombings followed a similar revenge truck bombing at Khobar Towers on June 25, 1996 that were grounds for Bin Laden allegedly departing the Sudan.   The Khobar, Saudi Arabia bombing was perpetrated by Iran and proxy Hezbollah‘s terrorist mastermind Imad Mughniyah.  19 US service personnel and one Saudi national were killed, and 498 others were wounded.

The Federal Appellate Court decision in Washington last Friday comes amidst the Trump Administration review of the Obama Administration Executive Order No. 13761 signed on January 13, 2017 temporarily lifting the 20 year sanctions against the regime of ICC-indicted Sudan President Omar Hassan al-Bashir. President Trump signed an executive order on July 11, 2017 deferring a decision on permanently lifting the Sudan sanctions until October 31, 2017.  How this Federal Court ruling will materially impact on the ultimate Trump Administration decision is a matter of speculation.  Further, it might complicate possible recent permission granted the Khartoum regime by the US Treasury that allegedly may enable Sudan to use the international financial transaction system.

The Hill reported  on the background and outstanding implementation questions that now face the DC Appellate court regarding compensation of American and non-US victims, “Court upholds $7.3B judgment against Sudan over embassy bombings.”

A federal appeals court on Friday ordered Sudan to pay more than $7 billion in damages to American families of victims of the 1998 embassy bombings in Africa.

The U.S. Court of Appeals for the D.C. Circuit upheld a lower court ruling that Sudan was liability for the bombings at U.S. embassies in Nairobi, Kenya, and Dar es Salaam, Tanzania.

However, it threw out the $4.3 billion in punitive damages and is seeking to clarify whether the non-American victims’ families [also] qualify for a chunk of the more than $7.3 billion in damages.

The ruling, written by Judge Douglas Ginsburg, a Reagan appointee, affirmed much of the lower courts’ ruling and rejected arguments from Sudan’s government that the court had considered “inadmissible evidence” to make their final determination.

“We’re obviously very pleased that the D.C. Circuit has affirmed [a lower court] decision after what has been a long struggle in court  [for]  the families,” said Stuart Newberger, a lawyer for the U.S. families at the law firm Crowell & Moring.  “We are hopeful that with this ruling, the Americans who were killed in [the attacks] get closer to reaching a final resolution to the tragic saga in their lives and finally get some closure.”

Lawyers for the Sudanese government argued that the entire case should have been thrown out for several reasons, foremost by challenging the court’s interpretation of the Foreign Sovereign Immunity Act (FSIA), which was revised in the middle of the 15-year legal proceeding.

Osama bin Laden lived in Sudan until the government kicked him out in 1996. The court took the side of expert witnesses that said the country continued to fund the terrorist group al Qaeda, which carried out the attacks that killed 200 people — including 12 Americans.

Sudan has denied its responsibility, saying that it tried to offer bin Laden to the U.S.

The federal appeals court is now asking the D.C. Court of Appeals, the top local court in the District of Columbia, if the families of non-American victims are eligible for compensation, because those provisions fall under state and not federal laws.

The ruling comes against the background of increased lobbying by both the American family members and the Sudanese government, which is working to lift U.S. sanctions.

The victims this week hired a lobbying firm, Kamins Consulting, to help obtain compensation for U.S. government workers injured or killed in the attacks in Kenya and Tanzania.

Scott Kamins has worked at both the Republican National Committee (RNC), where he served as its liaison to Capitol Hill, and at the State Department in the George W. Bush administration.

They also have Monument Policy Group, Morris J. Amitay — who worked as a Foreign Service Officer at the State Department from 1962 to 1969 — and McGuireWoods Consulting.

The firms are working to keep and expand a program that provides money to any American victims of terror attacks who also “have a federal judgment of liability and a separate judgment for a damage award,” said Frank Donatelli of McGuireWoods, who works on the account.

Previous attempts to set up a fund for the victims proved unsuccessful, but lobbyists eventually were able to tuck a provision into an update [of] a law that pays for healthcare for 9/11 first responders.

It put billions of dollars into an account with money obtained from fines paid by a French bank that violated sanctions levied against Sudan, Cuba and Iran. It also set aside $1 billion for the victims of the U.S. embassy bombings. Earlier this year, those families collected a total of $230 million.

“If they’re going to have access to our financial system, part of the removal of the sanctions should involve compensating American victims of terror that they’ve been found liable for harming,” Donatelli said.

Donatelli said that paying the reparations would likely improve diplomatic relations with the U.S. and pave the way for lifting sanctions on Sudan.

The lobbying firms on retainer, which hadn’t yet been paid by the families, received contingency fees for the successful effort. The three firms made about $600,000 each for two years of work.

Meanwhile, Sudan recently hired Squire Patton Boggs to advocate on its behalf with executive branch officials and Congress on improving relations with the U.S. — including lifting sanctions and paving the way for an increase in foreign investment.