Why do intellectuals fall in love with dictators and totalitarians? 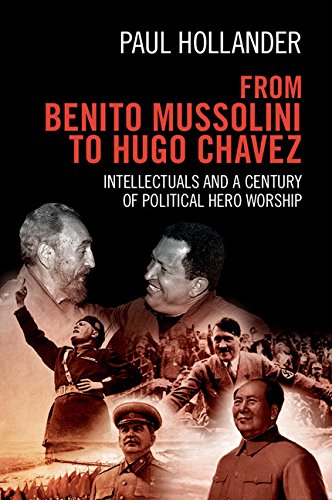 Imprisoned serial killers of women are often the object of marriage proposals from women who know nothing of them except their criminal record. This curious phenomenon indicates the depths to which self-deception can sink in determining human action. The women making such offers presumably believe that an essential core of goodness subsists in the killers and that they are uniquely the ones to bring it to the surface. They thereby also distinguish themselves from other women, whose attitude to serial killers is more conventional and unthinkingly condemnatory. They thus see further and deeper, and feel more strongly, than their conventional sisters. By contrast, they show no particular interest in petty, or pettier, criminals.

Something similar can be noted in the attitude of at least some intellectuals toward dictators, especially if those dictators claim to be in pursuit of a utopian vision. Paul Hollander, professor emeritus of sociology at the University of Massachusetts, Amherst, has long had an interest in political deception and self-deception—not surprising in someone with first-hand experience of both the Nazis and the Communists in his native Hungary. In 1981, he published his classic study of Western intellectuals who traveled, mainly on severely guided tours, to Communist countries, principally Stalin’s Russia, Mao’s China, and Castro’s Cuba, and returned with glowing accounts of the new (and better) worlds under construction there. The contrast between their accounts and reality would have been funny had reality itself not been so terrible.

In From Benito Mussolini to Hugo Chavez, Hollander turns his attention to intellectuals’ views of a wider range of dictators and authoritarian leaders. His study makes no pretension to scientific, or rather pseudoscientific, quantification, for example by first defining random groups of dictators and intellectuals and then administering structured questionnaires to the intellectuals about their attitude to the dictators. This kind of precision is often mistaken for rigor, but measurement is not meaning, and humans inhabit a world of meaning. Hollander’s study is therefore qualitative: none the worse, and a lot more interesting, for that. Even if only 10 percent of Western intellectuals, however defined, were apologists for, or admirers and supporters of dictators—sometimes serially, so that when one dictator finally dies or disappoints, another is adopted as a political hero—the phenomenon would still be significant and important. The list of influential intellectuals who have given their blessing to the most obviously terrible regimes is impressive: H. G. Wells, George Bernard Shaw, Romain Rolland, Jean-Paul Sartre (a serial offender), Norman Mailer, C. Wright Mills, Michel Foucault, and scores of others.

The question Hollander asks is why intellectuals whose own experience of danger was that of a negative book review or a hostile tenure committee, and who were so sensitive to the slightest threat, real or imagined, to their freedom at home, were so often attracted to the oppressors, and even slaughterers, of foreign multitudes.

First, there is the nature of the dictator to consider. Obviously not all dictators are equal, any more than are intellectuals. It was harder for non-German intellectuals to admire Hitler than Stalin because of the nature of Hitler’s ideas: claiming the inherent and ineradicable superiority of one’s own race and nation in everything from time immemorial is not the best way to attract foreign adherents. Nevertheless, many German intellectuals, notoriously Martin Heidegger and Carl Schmitt, rallied to Hitler, and few actively opposed him. How far their support was motivated by fear or opportunism is impossible to say; but years of study and intellection did not protect them from gross misjudgement, and even before Hitler attained power, support for him was greater among university students and the professoriat than in the nation as a whole (here, quantitative information is important). In other words, the penetrating clear-sightedness and benevolence toward humanity that intellectuals often claim for themselves by comparison with the benightedness of the rest of the population is at least sometimes—and maybe often or always—self-serving and mythical.

The fact that the most educated part of a modern society supports such-and-such a policy is no evidence that it is right. It would be a logical error, however, to conclude from this that the uneducated are always right. The contrary of error need not be truth: it is often merely a different error. Likewise, ad hoc dictators—those whose main purpose is to maintain themselves and their cronies in power, such as Basher al-Assad of Syria and Saddam Hussein of Iraq—may have their apologists, but seldom their enthusiasts. To excite intellectuals, dictators must embody, or claim to embody, some utopian ideal.

The special ability to see beyond appearances that intellectuals like to congratulate themselves for possessing is, indeed, their raison d’être: for if they cannot perceive what others cannot perceive, what is their role? Whereas the simple-minded see in a massacre of priests only a massacre of priests, for example, intellectuals discern in it the operation of the dialectic of history, the imagined future denouement of which is more real to them than the actual deaths themselves, merely eggshells on the way to the omelette.

Though Hollander does not claim that there is a single explanation for intellectuals’ attraction to dictatorships such as those of Stalin, Mao, and Castro (or Khomeini, in the case of Foucault), let alone to have found it, he nevertheless believes, in my view plausibly, that the longing for quasi-religious belief in an age when actual religion has largely been rejected is a significant part of the explanation. The totalitarian dictators were not the typical politicians of democratic systems who, whatever their rhetoric, seem mainly to tinker at the edges of human existence, are ready or forced to make grubby compromises with their opponents, reveal themselves to be morally and financially corrupt, are more impressive in opposition than in office, have no overarching ideas for the redemption of humanity, and make no claims to be panjandrums of all human knowledge and wisdom. Rather, those dictators were religious leaders who claimed the power to answer all human questions at once and to lead humanity into a land of perpetual milk, honey, and peace. They were omniscient, omnicompetent, loving, and kind, infinitely concerned for the welfare of their people; yet at the same time they were modest, humble, and supposedly embarrassed by the adulation they received. The intellectuals, then, sought in them not men but messiahs.

Evidence of the quasi-religious nature of Sartre’s serial dictator-worship is in the title he gave to the newspaper he relaunched in the 1970s and which still publishes today: Libération. Liberation from what, exactly? France at the time was hardly a tyranny. It is difficult not to conclude that what was meant was a mystical or other-worldly liberation from the existential conditions under which mankind is constrained to labor forever. Unfortunately, few things are less attractive than a religion that dares not speak its name as religion.

Hollander’s engrossing, well-written, and timely book ends with an implicit warning that we are far from having learnt our lesson once and for all, and are therefore far from immune from similar errors of judgment in the future. On the contrary, as dissatisfaction with “normal” politics and politicians rises in many parts of the world, we can expect that utopian illusions will rush in to fill a vacuum:

This book . . . confirms that many intellectuals, like human beings in general (and perhaps more so), need the kinds of illusions that promise a more meaningful and satisfying life. Their imagination, idealism, and urge for self-transcendence makes them especially vulnerable to the allure of the good intentions that heroic leaders in their alleged pursuit of social justice personify.