These impossible women! How they do get around us! … Can't live with them, or without them. - Aristophanes

The non-sequitur is a bottomless pit. Take the ongoing debate in America over birth control and who should pay.

First, the loony congressional Left collared a naïve 30 year old Georgetown University co-ed and encouraged her to testify about her active social life; an ill-conceived masque put on to back government or industry subsidized birth control. In the interests of privacy, let’s call her Aphrodite – no Hera she. 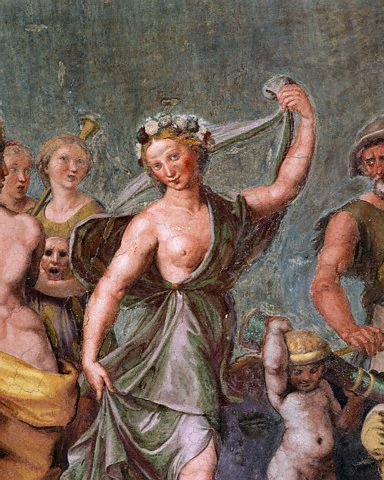 Aphrodite would have us believe that a frisky law student can afford thousands for tuition at a Jesuit graduate school, but can not afford pennies for protected recreational sex. Recreational, presumably because distaff law students haunt the saloons of “M” Street and Wisconsin Avenues looking for hangovers or hook-ups, not baby daddies.

Ms. Aphrodite claimed that she needed $1000 worth of birth control per year. If the protection of choice is a condom; our heroine’s arithmetic comes to 12,000 safe couplings at taxpayer expense in  three years of graduate school - or more than three encounters a day including weekends and holidays. The next time Nancy Pelosi holds a hearing on this matter, voters must hear from Aphrodite’s boy friend. The country needs to know what this guy eats, not what he wears.

Not content to let gaucherie marinate, Rush Limbaugh imprudently calls our lady lawyer a “slut” on national radio. The sweet stew of indiscretion then boils over and explodes into a hoochie mama media frenzy. Even the president gets into the act, calling Aphrodite and commending the now infamous law student for what may become known as the bonobo defense; indeed, the burdens of too much sex, too much exposure, and the need for a frequency subsidy. Aphrodite seems to be on the partner track before she leaves law school.

Then Limbaugh, ever the civic barometer, senses that he and Obama are inadvertently on the same page. ! The two seem to be turning a bimbo into a civil rights victim. Limbaugh, stimulated by show sponsors, apologizes quickly. Well, sort of.  Rush says he shouldn’t have sunk to “their” level. Presumably we know who “they” are.

Having shot from the lip, Limbaugh and Obama both missed the target. The Aphrodite problem is not, as it turns out, morality or women’s rights; it’s an intelligence quotient deficit.

Had our heroine wandered out of the hook-up hothouse in Georgetown, she might have discovered that condoms are already free in the District of Columbia; as is all manner of social life style counseling, fungible ailment medications, or surgeries for any unprogrammed population growth.

So it seems that Nancy Pelosi’s Muppet masters were using Aphrodite to double down. Anyone can find free rubbers or pills in the big city. What the social democrats really want is wall-to-wall coverage, and mandates, for all means of birth and (after) control in the name of women’s health. Aphrodite’s Potomac sex life was just the salacious bait for a bigger fish.

Seems the birth control beef is a viral extension of the abortion logic, where the seedier dimensions of life style choices, eugenics, and population control are elevated with the rhetoric of women’s rights or health care. Never mind that miscasting abortion exclusively as a health issue is a little like confusing genocide with gentrification.

Before you could finish a chorus of Wankers Aweigh, flyover feminists jumped into the fray to sponsor a nationwide sex strike. Yes, a coitus moratorium to punish men; insensitive brutes who joke about condoms and bananas in sex education classes - and then refuse to stretch a condom into an inalienable right.

The sponsors of the sex strike are based in Austin, Texas. They call themselves the Liberal Ladies Who Do Lunch (LLDL). Their cyber manifesto reads:

“We are women between the ages of 25-125 who are liberals and proud of it. We enjoy conversations with likeminded women in a safe environment about topics other than boyfriends and fashion, and we like to grab lunch together. Hope you'll join us for some interesting discussions and fun times. NOTE: This group is for true liberals--both socially and fiscally.”

A quick visit to the LLDL web site reveals that average age is closer is closer to 100 than 25 and these dowagers, as a group, look like they could miss a meal or two and be healthier for the hiatus. And if years, girth, and the exclusions in their manifesto matter; sex with men is probably not a recreation likely to worry these ladies anyway. For these gals, giving up sex may be a little like a mayfly giving up a trout.

Yet, they are not without influence. LLDLers have inserted themselves into the condom conundrum; and their proposal is nothing short of astounding. Choice is now joined with chastity; to wit, choosing not to have to have sex at all.

The liberal matrons of Texas have endorsed abstinence! Like clenched knees, long thought to be one of those common sense, yet equally improbable, solutions we hear on the religious Right.  With this, the Austin abstainers may have stumbled upon the silver bullet that neuters the extremes and potentially ends the “war on women”.

George Orwell was fond of saying that the quickest way to end a war was to lose it. Exactly! The clenched knee solution does just that. At first glance a tad misanthropic, but on closer examination, giving up giving it up, resolves every issue on the gender front; health, choice, civil rights, birth control, and abortion. If ladies “just say no,” Lysistrata will have been born again.

The sex strike is scheduled to begin on 28 April, too late for April Fools, but on point for Mother’s Day. Nonetheless, more than a few chads are still dangling.

Will a professional house call, an Eliot Spitzer if you will, be allowed? If the working girls can’t work, are they just labor statistics, do they get unemployment? And does an Anthony Weiner count? Is cyber sexting off the keyboard? And what about a Lewinsky? Ever since the Clinton administration, the meaning of “is” and genuine sex has been up in the air. And what about a Bill Maher, aural sex, or talking dirty? Will potty mouth be covered by the blackout? And who has checked with the White House and congressional intern programs? What are these youngsters to do during the moratorium?

Enough now! Quibbling about details will never give peace a chance; and better soft simulacrums than stiff kinetics any day. Sometimes the most obvious solutions hide in plain sight; a page out of Hilary’s foreign policy playbook maybe? Why shouldn’t sex sanctions work as well on domestic dinosaurs as economic sanctions work on atomic chauvinists in far flung places like Teheran or Pyongyang?

The gender wars have come full circle in a week; from bonobo to Lysistrata; from too much sex with government subsidies to no sex and no subsidies. But before those peace dividends are spent in May, Aristophanes provides some cautionary words about tumescent threats of the future. Or as that Greek chorus put it: “For I (women) am taxed too and as revenue provide men for the nation.” Amen, sisters!

G. Murphy Donovan is a former carpetbagger and resident of Amarillo and San Antonio. Based on field research, the author is very skeptical that real Texas women will ever give up what is arguably, after football, the second favorite pastime in the state.

To help New English Review continue to publish humorous and thought provoking articles such as this one, please click here.