“What difference does it make?” – Hilary Clinton

If you were wondering about the vector of American foreign and military policy in the next four years; you could do worse than examine the new national security team: John Brennan, John Kerry, Charles Hagel, and Martin Dempsey. 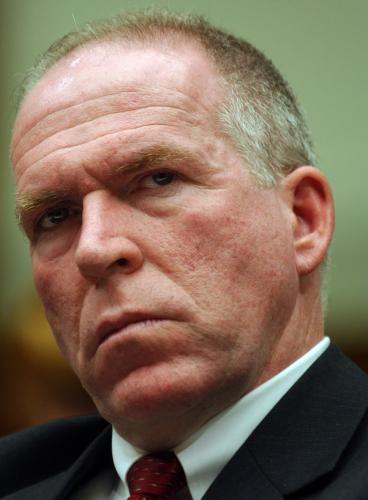 Brennan is first among equals as a White House intimate; heretofore a minor White House staffer who has had the president’s ear for the last four years. Yet he is the sponsor of a foreign policy where Islamism is the central, yet invisible, nexus of near and distant national security threats.   “Invisible” because Mr. Brennan has made his mark as an articulate apologist for, and co-architect of, a policy of stealth appeasement.

The pillars of the Brennan doctrine are threefold: high visibility engagement with Islam, low visibility isolation of Israel, and clandestine kinetic containment of “radicals.” Wars of the future under a Brennan doctrine will be confined to joystick combat, military gamers in Nevada using drones for selective global retribution.

Withal, any solo holy warrior, or Muslim organization, that kills in the name of Allah or jihad, or sympathizes with terror tactics, will still be characterized as an unrepresentative minority. Thus, a larger Muslim culture, especially the Arab vanguard, enjoys a kind of blanket absolution - and no incentives for reform. With Brennan, oblivious is the burka that obscures the obvious.

Alas, the roots of Muslim cultural pathology are religious, not political. Recent regime changes, especially in the Arab world, facilitate religious recidivism; not because Muslims misunderstand democracy, but because most adherents see no need to subordinate religious dogma to secular choice. Tribal aristocrats and military autocrats might come and go; but ayatollahs and imams are forever.

In the Ummah, internal and external instability are symptoms of this continuing conflict between rote and reason. The Muslim East is still struggling with a dilemma that the Christian West resolved centuries ago, a religious Reformation followed by evolutionary political Enlightenment. Misguided contemporary notions of moral equivalence tend to ignore the dangers of Islamic religious homogeneity and political absolutism.Such naïveté enables theocratic despotism and inspires genocidal fanatics.

The logic of the Brennan doctrine allows the ideological threat to be contained; theoretically limited to the likes of al Qaeda. Never mind that PEW surveys of Muslim attitudes in general, Arab opinion in particular, consistently registers toxic levels of hostility towards the secular West; anti-Israel, anti-Semitic, and anti-American sentiments.

With appeasement, statistical evidence, numbers of Islamist adherents and numbers of western casualties do not matter. The lynchpin of 21st century moral malaise may be a phenomenon that Theodore Dalrymple calls “incontinent forgiveness” and Rebecca Bynum clarifies as “tolerance raised above justice and forgiveness (raised) above mercy.”

With the Brennan doctrine, the body bags of  US Marines in Lebanon, New York’s Twin Towers, Iraq, Afghanistan, Lockerbie, Beslan, the USS Cole, or Benghazi are negligible investments in soft power; a strategy downsized to accommodate elusive goals like nation building (nee development), transition, and stability – objectives with no clear measures of effectiveness. Defeating theo-fascism is not part of the Brennan plan.

In his new role as CIA director, John Brennan is now the official curator of the Islamist foreign policy trope. If the Brennan doctrine does not tilt or pander to Mecca, then someone needs to explain why President Obama has yet to genuflect in Jerusalem.

Senator Kerry of Massachusetts might be the perfect choice to fill Hilary Clinton’s pants suit as chief American “cookie pusher.”

Mrs. Clinton was the most mobile, most visible, most popular, and least effective member of the president’s national security team. If frequent flyer miles are a measure of merit, then Mrs. Clinton is an over-achiever. Unfortunately, per diem and apology tourism might signify celebrity, but not social progress.

Like Madeleine Albright and Condoleezza Rice before her, Hilary was in the cat bird’s seat to confront global chauvinism and misogynistic obscenities in the Muslim world, yet she did little save preach, provide timid lip service to woman’s and human rights. Like Brennan, Mrs. Clinton seems to be pogonophobic.

As Hilary took her victory lap before congressional committees, she provided a fitting coda for Obama Cabinet beliefs about hate crime, cultural terror, and the global jihad to date. “What difference does it make?” says Mrs. Clinton. To be fair, we should note that Hilary Clinton, like her husband, is a fairly typical representative of her generation – an era where celebrity is confused with achievement.

Now comes John Kerry another reliable sailor from the US Senate, America’s axis of political inertia. The Senate has not passed a budget in recent memory, yet deficit spending proceeds apace midst the worst economic threat since the Great Depression. Alas, Kerry is not known for his economic acumen; his marriage into a pickle fortune notwithstanding.

Senator Kerry is a 30 year veteran of the foreign policy wars on the apologetic Left. Like Ted Kennedy, Kerry made his bones as an anti-war zealot, scion of the Jane Fonda wing of the Democrat Party. And like Mrs. Clinton, Kerry is likely to be a loyal and reliable face for the Brennan doctrine, a mix where timidity in the West will encourage the worst in the East.

John Kerry’s rehabilitation by near unanimous bi-partisan consent is a foreign policy marker too, a signal that there are little or no significant differences between the American Left and American Right on the Brennan doctrine. If Kerry is a poke in the eye, then Charles Hagel is an inside joke - or a deer caught in the national spotlight. The only choice for Secretary of Defense that might be worse would have been John Kerry. Hagel’s confirmation hearing was astounding. In a few short hours he managed to backtrack on every controversial position he took as a senator. Hagel has defined himself as a political eunuch.

As a self-described ideological castrato, Mister Hagel might be a cynical, yet logical, choice for a Defense Department that is about to undergo a surgery that cuts more than giblets. Hagel is painted as a bi-partisan player, but his Republican record is one of political opportunism underpinned by ‘closet’ anti-Semitism.

Hagel was probably selected because he is malleable, reliable, and an ecumenical complement to Brennan - another loyal subscriber to the defend Iran and “blame Israel” idioms. Painting Jews as scapegoats for Muslim angst has a history at the Pentagon. David Petraeus, Brennan’s CIA predecessor, while at CENTCOM, sponsored a ‘study’ to that effect. The “two state” chimera is underwritten by the ludicrous belief that tempering Arab and Muslim belligerence is a function of Israeli concession or capitulation.

There was a time when flag officers might be excluded from any analysis of policy futures. Military officers were expected to stay out of politics. Alas, that ship sailed with Admiral Mike Mullen, the last chairman of the Joint Chiefs of Staff (JCS). Mullen, you might recall, led the charge for gay rights, a political hot potato if ever there was one. Under Mullen, sexual preferences, or gender orientation, became a military readiness issue.

And political correctness was not limited to rear echelon warriors. During the same period, then ISAF commander, David Petraeus had female soldiers wearing hijabs rather than helmets in the field.

Taking a cue from Mullen, the new JCS Chairman, Martin Dempsey, jumped into the social sweepstakes before Leon Panetta departed. Dempsey opened the combat arms to women in the name of equality. The top four star claims that “sexual assaults will decline” (sic) in the US military with women at the front.

When Dempsey was asked why he did not act to save the Benghazi four, he replied that he was aware of the crisis in real-time, but did not receive a request for help from Mrs. Clinton. While Brennan and Clinton might be afraid of beards, Dempsey’s cavalry seems to be saddled with a “mother may I?” complex.

JCS crisis timidity does not limit enthusiasm for social engineering; risky experiments unencumbered by experience or evidence. Never mind that candidate women have already failed to meet infantry training standards in the Marine Corps. Statutory equality among first responders, police and firemen, has led to significant alteration of training and qualification standards. Marksmanship was the first casualty.

If the Joint Chiefs were serious about equality, they would be lobbying to have women included in selective service registration. Calls for equal rights without equal obligations are a fraud.

Flag officers routinely allow themselves to be drawn into iffy domestic politics, and such generals are sure to be pushovers for hirsute fanatics abroad, zealots who care little for women’s rights and even less for alternative life styles. And herein lays the real tragedy when misguided notions of equality subvert common sense. When gay State Department envoys and Defense Department women are deployed to Ummah battlefronts, they are exposed to double jeopardy, military and cultural risk. Feminism and homosexuality are capital offenses among Islamists – and sharia justice in these matters is often instantaneous.

The Obama cabinet and the JCS seems to have learned nothing from the executions and mutilations at Benghazi. American Cabinet officers and generals have elevated special social pleading at home above the special hazards in all those Muslims wars abroad.

There is no evidence that the Brennan doctrine supports prudent near or long term strategy. Strategic appeasement has now produced a generation of catamite tacticians, leaders that assume a defensive crouch after each indignity, hoping that the next atrocity will not hurt as much as the last. Blowback after Benghazi illustrates the phenomenon.

The knee-jerk Cabinet response is defensive; blame You Tube then throw more money at outpost “security.” Indeed, a billion dollars will be taken from Defense Department accounts and thrown into the bottomless pit of Foggy Bottom consular vulnerabilities. Alas, passive “engagement” is again raised above justifiable, if not necessary, action and confrontation.

The moral cowardice embedded in the Brennan doctrine is underwritten by fear, naïveté, and misplaced assertions of moral equivalence. We fear that things could get worse; fears about oil, debt, and terror. We also pray that our tolerance will overcome their dogma; forgetting, unfortunately, that most Muslims are tolerant only where they are a minority. And we continue to be seduced by the shibboleth that Islam is one of the “world’s great religions” and not just another mutating variant of political fascism.