The Optics of Exploitation

“Television takes precious time from the process of growing up.” – N. Minow 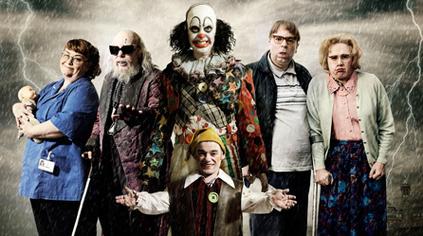 I received another online opinion survey the other day and clicked it into that bottomless pit of cyber trash. Unsolicited surveys remind me not to join social networks or give out my e-mail address.

I went ‘cold turkey’ on opinion surveys after a brief encounter with the Nielsen folks, the electronic snoopers that presume to survey television viewing habits and other consumer hobbies, like shopping. I was told that my family was part of a ‘select’ group, suggesting it was an honor to be chosen, a gift was forthcoming, and the data from my embedded device would influence the folks who select advertising and content for television programming.  After a brief chat with the cold caller, I surmised that Nielsen families might be the real culprit for the banalities that pass for content; news and entertainment on the American airwaves.

A little annoyed by the introductory pandering, I allowed as how a Nielsen box in my house might be an “honor” in the same sense that a court-ordered ankle bracelet is an honor. I asked the nice lady to define the demographic that ranks bad habits over privacy. Silence ensued.

I told the Nielsen gal that my young niece, and her friend, wanted to watch a game show one evening while we prepared dinner. Alas, we had to endure erectile dysfunction and vaginal mesh commercials – twice, during a 20 minute broadcast.  I asked the lady from Nielsen if opinion surveys would alter that regimen of penis and vagina adverts at meal time. She was not amused.

I was tempted to inquire if she had ever met a chap who actually had “an erection that lasted more than four hours.” Fortunately, telephone etiquette prevailed. I also asked the good lady if she monitored the opinions and habits of people who didn’t watch much TV at all. More silence ensued.

I then volunteered that, in my experience as a former Intelligence functionary, people subject to involuntary surveillance were a select, albeit unsavory, demographic. I further suggested that people who “volunteer” to host electronic monitors in their home might be worse still, folks who didn’t have a life. In short, I speculated that flat screen zombies might not be the best demographic for shaping culture. I also hinted that the Nielsen “family” might be a low common denominator. “Are you trying to hurt my feelings,” I enquired. More dead air followed.

I also asked how many people rejected Nielsen’s TV diaries, set boxes, or the Orwellian ‘people’ meter. She claimed not to have that information. Then I tried negotiation. I said that I would be happy to assist the 34,000 salaried data soldiers at Nielsen - for free; if she would allow her troops to cut my grass once a week - for free. She was certain that Nielsen didn’t do lawns.

I then asked if she thought the Nielsen sheep were a captive audience, bound by ego - or just slaves to pixel autism. No answer! Next, I allowed as how if I were to answer questions, shouldn’t she? Silence! I asked also how Nielsen got my unlisted phone number. No reply! And finally, I asked if she had ever encountered the notion of tautology in her work. Then she hung up.

My questions for the cold caller were rhetorical of course. Women who solicit joiners are trained to ask, not answer. Nielsen doesn’t give away data in any case. That’s the nature of telephone or internet surveys; the data flow is controlled, a one-way street. The Nielsen game assumes, indeed cultivates, passive respondents. Neither David Calhoun nor his employees are curious about curiosity.

I heard a radio rant about “low-information” voters a while later. At first, I thought the phrase was another example of media diffidence, implying poorly educated or ignorant without actually saying ‘stupid.’ Then I recalled the recent controversy about “vote buying” in American presidential politics. The dependent 47% of political voters, those folks who don’t pay much in taxes, yet collect a government check, have more political clout than the private, tax paying, productive demographic. I was fairly certain that the Nielsen family and the low infos might be the same crowd; indeed, the Nielsen family would surely flourish as a subset of a larger inert audience.

Eighty five percent of household viewing and purchasing decisions are made by women.

Nielsen targets the “shop until you drop” stereotype, and then reinforces that media cliché about women with subsidiaries like the Nielsen Photo (magazine) Group. PIX magazine is an example.

In many respects Nielsen is like a government, an institution capable of making spare parts for itself. Nielsen collects data from a narrow audience, mainly passive women, and then provides that statistical justification to Hollywood, Madison Avenue, and consumer industries as the ‘scientific’ basis for production and programming decisions. If you read between the Nielsen lines, women are the gatekeepers for consumption; for households, children, and ‘families’ – hence, double X chromosomes in the crosshairs.

Research into shopping habits is often an exercise in victimology. Take Salt Sugar Fat: How the Food Giants Hooked US by Michael Moss. Another paean to political correctness, the Moss book blames the food industry, not buyers or number crunchers like Nielsen. The author claims women are like “addicts” - overweight, uninformed, and exploitable; but he never musters the courage to acknowledge buyer “choice” as the problem. So-called ‘consumer advocates’ like Moss make the same assumption as Nielsen; American buyers are plump, lazy, uninformed substance abusers. Moss writes for the NY Times where social condescension often appears above the fold.

The sad part about the ‘fat, dumb, and happy’ premise is that, if the arithmetic matters, the stereotype of Americans as bovine consumers seems to be accurate.

Withal, Nielsen might be the most successful feather merchant in history; a perpetual demand factory.  Entertainment and consumer industries already know what they want to do, produce cheap and market high. The Nielsen home invaders simply help to focus the optics of exploitation. Indeed, the main premise of most media, including public networks, is manipulation – the manipulation of volunteer victims.

Nielsen demography is science in the same sense that ‘water-boarding’ or brain-washing is science. Nielsen statistics provide a scientific gloss of respectability for the marketing of comestible and cultural garbage; literal bread and circus.

After 50 years of commercial service, data from the Nielsen families has underwritten cultural icons like Bart Simpson. Bart is Matt Groening’s anagram for “brat.” Indeed, Homer’s kid has popularized cultural banalities such as “eat my shorts!” and “underachiever and proud of it!” The most successful cartoons feature selfish, obnoxious children - and passive, clueless adults. Men are a special category of idiot on the small screen. Alas, the television arts hold a mirror to life – junk food for mind and body.

OMG! There it was; Newton Minow’s prophesy! Leave it to a lawyer. The obvious often hides in plain sight; even the ugly truth about 21st Century culture. The worst among us are ascendant; the new social ideal is a fusion of childish culture, consumerism, and passive politics - worms in the apple of democracy.

My “unique” household is not likely to hear from Nielsen again. But when I wonder why a prominent progressive like Newton Minow, a former FCC Chairman, could suggest that a great experiment like the United States would become cultural and political “wasteland,” I will be fairly certain about who tilled the trash. Or as a cartoon character from another day put it; “We have met the enemy and he is us!”