Whistles are in the news these days; wolf whistles, dog whistles, and government whistle blowers. All are, given allowances for pitch and volume, propelled by the same hot air.

We might begin with wolf whistles, the traditional or spontaneous noise men make when encountering attractive women, that moment when libido goes on autopilot. Wolf whistles are of two sorts; lewd and licensed.

The lewd whistle is often heard at job sites and might qualify as a kind of sexual harassment. The official wolf whistle is muted; as when appearance is a job requirement. Muted wolf whistles are the Muzak of human resource (nee personnel) offices at Media conglomerates.

Network newsies, male and female, are often a kind of corporate whistle bait.

Most local and national news teams are a surface study in diversity; men, women, and a rainbow of races and skin tones. But if you look twice at news women, it’s hard not to think; “pole dancer.” Some media babes even help with suggestive stage names. Katty Kay of BBC and CPB comes to mind; surely not as bold as Pussy Galore, but much more aggressive than Kitty Whatshername. 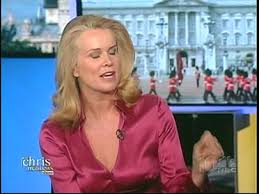 In spite of all the puffing about talent and sexual equality, the attributes most admired in news chicks are visual; face, décolletage, pins, and youth. Literacy or intelligence is not necessarily a show stopper if a girl has better twins, or legs, than a teleprompter.

Yes, yes; there are exceptions. Call them tokens if you will. Andrea Mitchel, Doris Kerns Goodwin, Diane Rehm, and Barbara Walters would hardly qualify as spring chickens or eye candy. Media matrons are a testimony to tenure or the need to service geriatric or progressive demographics. Indeed, the public airways are no slouch when it comes to tokens. American Public Broadcasting has at least one aging, zaftig, black, female anchor.

Here media moguls may be missing a bet. When you have a social agenda, think of how much more effective a loud, overweight, angry, black woman might be at the anchor desk. Skinny and black is as lame as skinny and white. The former may explain why Michelle Obama can’t sell salad and tofu to African American kids even as a free lunch. The fat angry American demographic is the real silent majority.

Pretty men are the other half of the whistle bait phenomenon. Let’s be clear here. We are not just talking about Twinkies like Anderson Cooper or David Gregory. Hard to think of any fat white anchors, but old, anorexic, and ugly has a few network tokens. Larry King and David Frost are good examples of prime-time road kill visuals.

Still, the cloying, boyish male newsie is the rule and they cover a spectrum from the dainty George Stephanopoulos to thuggish Chris Mathews. Stephanopoulos is a former Bill Clinton handmaid and Mathews is another political naïf, schooled by Tip O’Neill to worship at altar au gauche.

Weekend Hardball is what American Catholics do if they are too lazy to get out of bed for mass on Sunday morning.  Mathews is very loud, yet not too macho to admit that a “tingle” ran up his leg when a hunky black dude won the White House. Which leg tingled was never specified. Alas, some of the best agenda merchants cut their teeth as political catamites.

Homoerotic candor is not Mathew’s only claim to network fame. Dog whistles are his real forte.

An actual dog whistle is an instrument tuned to a pitch that only a canine can hear. The euphemistic dog whistle is an imagined rhetorical device; words supposed to contain hidden or coded messages. Mathews is a self-anointed ‘between the lines’ expert.

According to NBC news analysts, the most common dog whistles are racist. Here any criticism of criminal Chicago, impecunious Detroit, incompetent Newark, failing urban schools, or a mendacious Oval Office is supposed to be racist. For Mathews and urbane lynch mobs, the dog whistle is the all-purpose slander which is supposed to silence critics, immunize a race, and patronize another hyphenated “victim” from a mixed marriage.

Alas, the cure is often worse than the cancer. Put aside for a moment the image of an effete, rich, boozy, white (actually pink) guy playing the ‘brother’ card on national television. Then consider which side of the Obama legend Mathews is trying to immunize, the white mother or the black father. Mother was a white free spirit and father was an African dead beat. Potential stereotypes in play here are stereoscopic.

Mathews recently presumed to apologize “for all white people” for the Zimmerman acquittal. Here the intrepid NBC host plays judge and jury. Ever attentive, Christopher John didn’t seem to notice that the trial featured a black victim, an alleged Hispanic perp, and a mixed race, all gal jury. Mathews is the kind of journalist who never misses a chance to validate stereotypes, especially those about Irish American touts or racially ambiguous politicians – including the president.

Clearly, words still matter. NBC‘s dog whistle fetish now has an echo over in Foggy Bottom. John Robinson, Chief of Diversity, at the US State Department has published a list of words and phrases which could be considered dog whistles. The list includes such expressions as “black and tan, going Dutch, holding down the fort, handicap, and rule of thumb” (sic). We can leave it to readers to determine what group might be offended by what. Here’s a hint; “rule of thumb” is code for wife beating.

Dog whistle diversity can’t hold a candle to the blowers, another Media obsession. A “whistle blower” is presumed to be a conscientious citizen or employee who identifies waste, fraud, and abuse. Bradley Manning and Edward Snowden are contemporary poster children for the phenomenon.

All bureaucracies, especially government agencies, have grievance departments. These offices sport various labels; internal affairs, auditors, civil rights, diversity, ombudsmen, inspectors general or some such. The titles vary, but amongst cognoscenti, they are known as “rat squads.” Unfortunately, internal watch dogs are more likely to be used to settle scores, with colleagues or unpopular supervisors, rather than for institutional reform.

The most famous rat squad was the internal affairs division of the New York City Police Department that helped whistle blower Frank Serpico catch a bullet (1971) in the face. Detective Serpico retired for health reasons, integrity intact - to Switzerland.

The newest federal leaker dragnet is Orwellian, encouraging informers to become rat catchers. Under Obama’s Internal Threat Program, supervisors and federal employees at all levels are admonished to watch and report “high risk persons or behaviors” - using arbitrary markers, none of which has ever been validated by experience or science.

Alas, the only possible profile for whistle blowers is suicidal. All leakers have three futures; exile, unemployment, or worse. The recent fate of the Benghazi leakers at the US State Department, by all reports honest brokers, says all that needs to be said.

If you work for government, at any level, and you identify too many problems; you become the problem. Neither apparatchiks, nor journalists, nor politicians ever trust an informer completely – nor do they befriend leakers once their utility is exhausted. A legacy hat tip to Bob Woodward seems appropriate here.

So the next time you see network “whistle bait” pontificating about candor, courage, or the integrity of malcontents; consider the speaker, the agenda, and their sources. With wolf whistles we are betrayed by our eyes, with dog whistles we are betrayed by our ears, and with whistle blowers, we are often betrayed by colleagues or friends. Withal, journalist partners, like squirrels, are often cute; but in the end, they, like many informants, might just be rodents.

G. Murphy Donovan is a veteran of bureaucratic wars in four Intelligence Agencies.