a review by Richard Kostelanetz (June 2014) 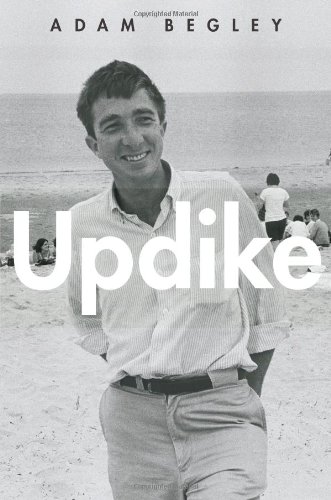 Adam Begley’s Updike is a thickly conventional biography of a thickly conventional American writer. By the measure of winning loyal midtown Manhattan publishers for his work, he was the most successful ever, with fifty years of support from a popular weekly slick magazine called The New Yorker and nearly as long from a book publisher named Alfred Knopf.

For the serious literary writer, TNY is two-edged, on one hand its staffers benefitting from a regular stipend and leverage in appealing to commercial book publishers. On the other hand, few are remembered after they disappear from the magazine. The reputations of Donald Barthelme, John O’Hara, Robert Benchley, and James Thurber, among other TNY creations, fell with their departure. Some critics contend that TNY chopped down a truly eccentric author named S.J. Perelman to be much less than he could have been. Even a writer as strong as Renata Adler vanished after she resigned, though many years later she is still alive. Among its arts critics, try to remember names other than Lewis Mumford, Harold Rosenberg, Arlene Croce, and Edmund Wilson. Perhaps recognizing this likely fate for Updike, Begley ends his preface with the wish to “make the beginning of a surge in his posthumous reputation.”

What the biographer does document is how well Updike fit into the magazine that he began admiring as a teenager—a magazine that, its title notwithstanding, was aimed at readers residing outside New York City, beginning with suburbanites. (Likewise, The New York Review of Books is written not for New Yorkers but provincial academics.) Remember that Updike discovered the magazine while residing in a suburb of Reading, PA; that its current editor grew up in New Jersey; and that, as far as I can tell, few, if any, current editors or staff writers graduated from a New York City high school (in contrast, say, to such earlier TNY staffers as Lewis Mumford, Harold Rosenberg, and Robert Gottlieb). Since Begley regards Updike’s moving his family out of New York City in 1957 as crucial, the principal achievement of this biography is identifying how and which fictions reveal Updike’s own mostly suburban experiences.

Indeed, one implicit theme of Updike is that his subject was less a fabricator in the greater tradition of imaginative literature than a kind of highfalultin reporter. His voluminous art and book reviews are likewise essentially reportorial, rather than significantly evaluative, theoretical, or generally influential. As essentially a magazine writer, Updike knew how to fill space.

The dust-jacket blurb from Joyce Carol Oates reminds us that the American writer he most resembles is her. Both came from modest middle-class provincial backgrounds to score summa degrees at their colleges. (Not alone, may I suspect summas as too goodie, probably reflecting considerable butt-kissing.) Both benefitted from loyal support, in her case less from a single magazine than the de facto community of literary magazines and an Ivy League university that named her among its first women professors.

Though both produced many books, few count as masterpieces likely to survive long after their passing. As ardent book reviewers, both suffered from a reluctance (or inability) to write negative notices, thus defining themselves as hack summa publicists rather than genuine critics. Both also sought all the tokens of bourgeois success that an American writer can possibly accumulate, beginning with a regal house in a famously high-class exurb. Of both may we wonder if their careers would have prospered without their loyal backers?

Having won all the honors America could offer, Updike sought the Nobel Prize. However, he had two strikes against him. The Nobel literary committee has not favored any American-born male since John Steinbeck in 1962 (Saul Bellow starting in Canada, don’t forget), while its current chief has expressed suspicions of the American literary-industrial complex.

If Bellow’s success was meant to validate Jewish-American literature, Updike was cast as a comparable avatar for another literary group--writers for midtown slick magazines in general and TNY in particular. Much like the Jewish-American writers, the midtown slickers had to disprove the negative sentiment that none of their kind could be accepted as a Major American Writer.

It was not for nothing that another midtown mag called Time put Updike on its cover not just once but twice or that he was at a young age inducted into the American Academy of Arts & Letters, which is the midtowners’ short-sighted, putatively selective club. Even though Updike resided outside New York, the midtown slicksters made him their “point man” in the world-class literary sweepstakes. Thus, little negative about him, neither personally nor professionally, would ever appear in the midtown-mags’ pages, because their aspirations for literary validity would depend upon acceptance of his “genius” not only in America but elsewhere in the world.

However, in contrast to his literary hero Vladimir Nabokov, Updike failed to define any new territory. Neither suburban sex nor rustic nostalgia would be enough. About both Updike and Oates we can now judge that neither encountered the great obstacle that would have forced them to do something else and perhaps get much better. Over decades neither developed, as some sometimes judge. (One curious detail attracting Updike to his second wife was that Nabokov himself had years before awarded her his top mark on a Cornell exam.) Let you think him calculating, let me judge that Updike’s champions discovered him, probably before he recognized them.

One reason why I’ve not read much Updike is that I haven’t resided in any suburbia for more then fifty years (and that the suburbia I remember had problems, beginning with the imprisonment of its children, that he doesn’t address). A second reason is that I often find his prose routinely inflated and, thus, affected. Notwithstanding TNY’s claims for higher line-editing, his writing wasn’t often enough chopped down. I suspect that from his fictions alone someone could compile a marvelous anthology of extravagant Updike sentences that, untouched and in sum, would ultimately be more deflating than, say, any intentional parody. In his interviews Updike routinely expressed the glib evasiveness and false modesty typical of someone insecurely self-confident.

The perils of adultery is to me a limited subject, best done long before Updike by Anton Chekhov in a story translated with variations on “The Lady with the Lapdog,” albeit with less sexual detail. It’s also distasteful, at least to me. Fairly adventurous in my own bachelor life, may I nonetheless say that I find sleeping with married women to be distasteful; married people sleeping with other married people to be discreditable; and, worse, married people sleeping with their neighbors’ and friends’ wives, as Updike frequently did in Begley’s narrative, to be profoundly unacceptable. Call me an unattached prig, if you will; but marriage to me includes vows meant to be kept until they are annulled, while infidelity requires too much lying to be tolerated. Worse, people who lie about their sub rosa relationships are likely to lie about other important matters. In my memoir about the cultural oasis called “Artists’ SoHo,” I noted in passing that wife-swapping or even lover-swapping rarely happened, probably because a artists’ colony is less boring than a suburb and perhaps because its women are busier. Another personal prejudice is my disliking any purported “fiction” about readily identifiable people.

One misfortune that Updike didn’t acknowledge (and indeed may not have known) was that satisfying his loyal publishers limited him. Let me suggest a hypothesis that wouldn’t occur to his limited biographer—that the most deviant and thus more interesting Updike did not appear in The New Yorker. Consider his remarkable poem “Cunts,” which Begley doesn’t mention at all. As far as I can tell, it first appeared in 1973 in William Packard’s The New York Quarterly. The text in its entirety can be found here, at least until it is “taken down”: http://english1022.tripod.com/id15.html.

Observing the principle of “fair use,” I quote only its sub-title and the opening stanza:

(Upon Receiving a Solicitation for Membership in The Swingers Life Club)

The Venus de Milo didn’t have one, at least no pussy
that left its shadow in the marble, but Botticelli’s Venus,
though we cannot see it for her sea-anemone hand,
did, no doubt-an amber-furred dear mouth we would kiss
could we enter the Arcadian plane of the painting.
We must assimilate cunts to our creed of beauty.
September Morn held her thighs tight shut, and the dolls
we grew up undressing had nothing much there, not even
MADE IN USA,
but the beauties we must learn to worship now all
have spread legs, splayed in bedspreaded motel beds,
and the snowflakes that burst forth are no two alike:
convolute snapdragons, portal and tears
and T-bones of hair, lips lurid as slices of salmon,
whirlpooly wisps more ticklish than skin, black brooms
a witch could ride cackling through the spatter of stars,
assholes a-stare like monocles tiny as dimes.

Knowing nothing in particular, may we assume that this was a marvelous text that The New Yorker couldn’t publish, but that Updike respected sufficiently to want to see in print, even in a literary quarterly with a modest circulation.

It was apparently reprinted as a stand-alone chapbook in 1974 by Frank Hallman, who four decades ago made a short-lived biz of publishing a few hundred overpriced copies especially for “collectors.” The last time I looked at Amazon.com, it has for sale one copy for $175 on a page that incidentally recommends a book of mine titled Cunts After J. Updike for a considerably lower sum. Not until Updike’s Collected Poems (1995), more than two decades later, did he bury his "Cunts" beside other texts of his.

As Begley doesn’t (or doesn’t want to) acknowledge this special Updike text, such an omission raises the question of how much other deviant Updike appeared in an obscure source or, better, whether he wrote other “unacceptable” texts that could not be published in his lifetime. Begley’s failure to confront this question makes his thick biography less than definitive.

Indeed, a neater Updike biography appears in Christopher Carduff’s appendices to the Library of America’s two-volume Collected Stories (2013), which also documents how many Updike texts did not originally appear in TNY. May I venture that any critic studying these closely would come to some valuable conclusions?

Individual entries on Richard Kostelanetz’s work in several fields appear in various editions of Readers Guide to Twentieth-Century Writers, Merriam-Webster Encyclopedia of Literature, Contemporary Poets, Contemporary Novelists, Postmodern Fiction, Webster's Dictionary of American Writers, The HarperCollins Reader’s Encyclopedia of American Literature, Baker's Biographical Dictionary of Musicians, Directory of American Scholars, Who's Who in America, Who's Who in the World, Who's Who in American Art, NNDB.com, Wikipedia.com, and Britannica.com, among other distinguished directories. Otherwise, he survives in New York, where he was born, unemployed and thus overworked.

If you have enjoyed this essay and want to read more by Richard Kostelanetz, please click here.

Is it anti-democratic for Israeli MKs to be required to pledge loyalty to the state?

Louis Armstrong - What a Wonderful World

Stormy Days for the President and the Republic

Iran Decides to Do Without Any Israeli Hardware or Software

We Need the Spirit of Dunkirk

5-Jun-2020
Lebanon: A Personal Memoir Twenty Years after Israel's Withdrawal 5-Jun-2020
Tommy Robinson is arrested for assault at ‘Asian sex gang’ protest but claims he ‘acted in self-defence’ after man spat in his face and called him a ‘racist p***k’ 5-Jun-2020
Is it anti-democratic for Israeli MKs to be required to pledge loyalty to the state?