Modern Hebrew – The Past and Future of a Revitalized Language 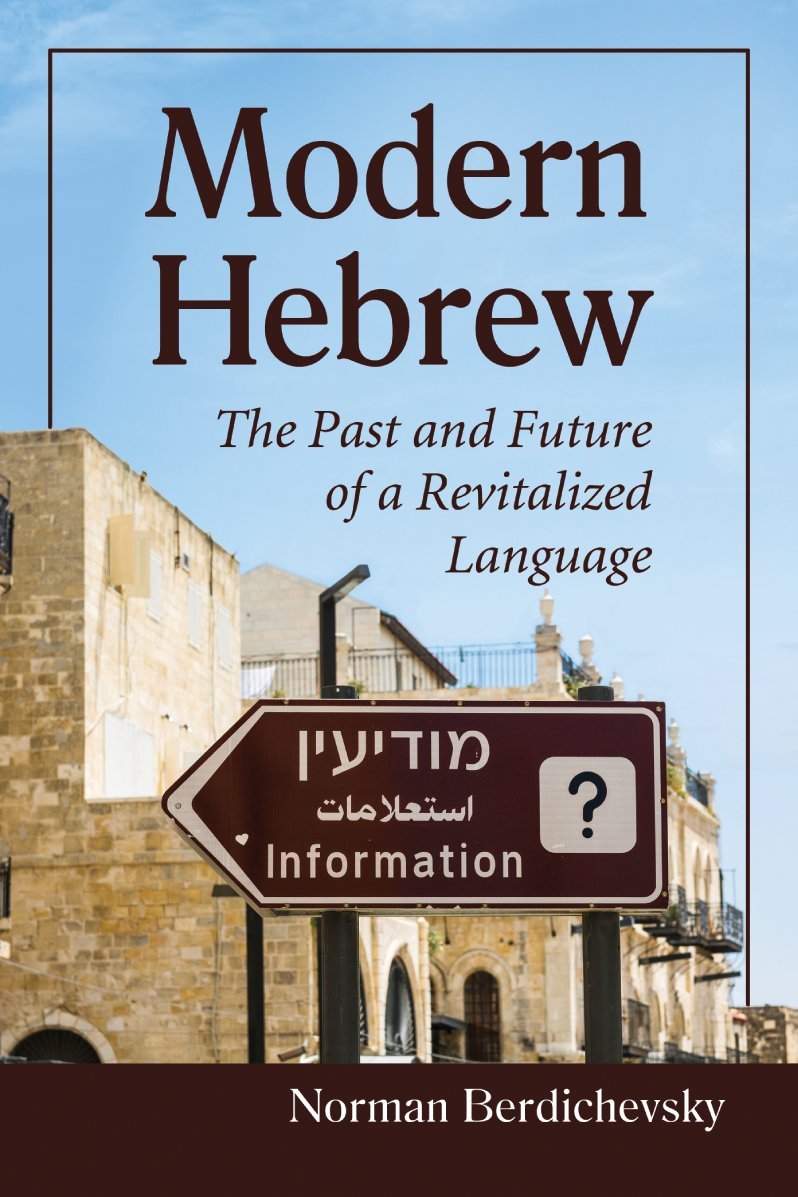 Modern Hebrew: The Past and Future of a Revitalized Language
by Norman Berdichevsky
McFarland & Company
July, 2014

Why another book on Israel? I asked myself this question for a long time before deciding to write   Modern Hebrew: The Past and Future of a Revitalized Language – which I alluded to in three previous New English Review articles, "Esperanto and Modern Hebrew –“Artificial” Languages that Came to Life" (February 2014), "From Albert to Arik: There Has Been None Like Einstein" (December 2013) and "Zohar Argov and the Hebrew Language Gap" (May 2013). The answer to why write another book materialized from my experiences over the past four years teaching Modern Hebrew at a major Florida University and witnessing first hand how the lack of a common language between Israelis and American Jews is an obvious but overlooked factor in explaining why so many American Jews are insensitive or unappreciative of the creation of a modern nation, national literature and spoken idiom that makes Hebrew quite distinct from the language of ritual prayers recited in the synagogue.

Many American Jews, in spite of numerous trips to Israel, are wholly unaware of much of “what makes Israeli society tick,” that it has a vocabulary more than ten times larger than the classical languages of the Bible, Mishna and Enlightenment or that all laws, debates in the Knesset, the legal cases in court, and applications for patents, are in Hebrew. Their view of Israeli affairs is often considerably biased because it is based on highly selected and fragmentary extracts of published material translated from Hebrew by the media. In my introductory courses, at least half of the students were even unaware that the name for Hebrew in Hebrew is “Ivrit.”

The instruction of no other language has historically been regarded as so “dangerous” and the subject of such active persecution. Three generations of Hebrew teachers and students risked imprisonment and the loss of their livelihoods in the USSR for carrying on the “underground” Hebrew movement to learn the language – something that is taken so much for granted by many Diaspora Jews who commonly associate it with a tedious preparation for their bar-mitzvah confirmation. Over the past two generations, there has been a steady decline among American Jews in the cultural and emotional identification they feel with Modern Hebrew literature, song and dance, elements that once drew many Jews in the Diaspora close to the Zionist project and the emergence of a modern national Israeli culture. Nothing better illustrates why Jewish identity no longer encompasses much of the sense of solidarity or the intense pride found among the parents and grandparents of American Jewish university students.

In the monumental literature dealing with Israel, Zionism and the conflict between Israelis and Palestinian Arabs, relatively little space has been devoted to the social and political consequences of the epic transformation of the classical language of the Bible into Modern Ivrit, the national language of the State of Israel, its everyday vernacular spoken by seven million people including more than a million Arabs who are increasingly proficient and better able to participate in the decisions they must make as Israeli citizens and contribute to the society they increasingly see as their only future.

This half of the equation is that Arabs and Jews in Israel do speak the same language literally and increasingly metaphorically as well. The book explores the major changes that have occurred over the same past four years among Israeli Arabs that have witnessed the fratricidal conflict between Hamas and the Palestinian authority, the growing split between Sunni and Shia Islam in Iraq and elsewhere, the descent of large parts of the Arab Middle East into chaos, the gruesome civil war in Syria with the threat of its expansion into Lebanon, the rejection in Egypt of the Morsi government by fifteen million demonstrators in the streets appalled by the chaos brought on by the Muslim Brotherhood and the revolutionary changes in the prospects of Israel’s buoyant and thriving economy fueled by major new energy sources and the growing close relations with India and China.

As a result of these developments, Israeli Arabs are more reluctant to give up the advantages they enjoy as a result of their knowledge of Hebrew for the much greater educational opportunity and career advancement this affords them compared to Arabs elsewhere. They represent the most highly educated cohort of Arabs integrated into a modern sophisticated economy anywhere. As the day draws nearer for any final border revision, more and more of them will undoubtedly express their preference to remain as Israeli citizens no matter what lip service they have given to the Palestinian cause in the past. This has become more and more evident with public opinion polls over the past four years even causing a considerable revision of some of the most pessimistic assessments made by sociologists on the prospects for better Arab-Jewish relations in Israel.

The book traces the historical background, past and current controversies, challenges and dilemmas facing the Israeli people that stem from the choice made four generations ago to create a renewed nation of Jews in the Land of Israel with Hebrew as their national language. The 17 chapters examine how Hebrew came to function as a role model for other national revivals, how it overcame the many obstacles to revival as a spoken vernacular and its growing prestige and importance. It also analyzes the importance of the language for mutual understanding between Israelis and Diaspora Jews and between Jewish and non-Jewish Israelis. It is a book dealing primarily with the social and political use of the language and does not cover literature nor is it another biography of the pioneer founder of the movement to make Hebrew into a modern spoken vernacular, Eliezer Ben-Yehuda. It is the story of his vision and how it animated a large part of the Jewish world, gave new confidence and pride to Jewish youth during the most difficult period of modern Jewish history and infused Zionism with a dynamic cultural content. The chapters are as follows:

1  Modern Hebrew in American Popular Culture
2 The Magnificent Heritage of Biblical Hebrew Prior to the Modern Language
3 Modern Hebrew’s Influence on “Minor Language Revivals and Esperanto”
4 The Three Thousand Year Old Treasury
5 How Hebrew Became a Modern Language
6 Do the Israelis Speak Hebrew or Israeli?
7 The Great Yiddish-Hebrew Rivalry
8 Negation of the Golah (Exile); Hebraization
9 Baltic Training Grounds for a Hebrew State
10 The First Modern Hebrew Textbook With Real National-Cultural Content
11 Soviet Persecution of Hebrew
12 Israeli Arab Use of Hebrew
13 Towards a Hebrew Republic?
14 Slang and Profanity
15 The Current Assault on Hebrew at Home; Competition from English
16 Outlook for Hebrew in the U.K. & U.S.
17 Epilogue

Norman Berdichevsky is also the author of The Left is Seldom Right from New English Review Press.

With America in decline, this is Canada's time to shine

Afghan Feminist: 'The Taliban and My Own Family Will Come for Me'

Met Police are slammed for failing to catch knifeman days after he stabbed Christian preacher, 39, in Charlie Hebdo T-shirt at Speaker's Corner in front of 30 witnesses in broad daylight

Cuba: An opportunity to right the ship on Latin America

In Iran, the Supreme Leader is Worried

1-Aug-2021
Why Afghan Women Have Been Abandoned: The Power of Belief 1-Aug-2021
With America in decline, this is Canada's time to shine 1-Aug-2021
Afghan Feminist: 'The Taliban and My Own Family Will Come for Me'