Churchill, War, and the Battle of Britain 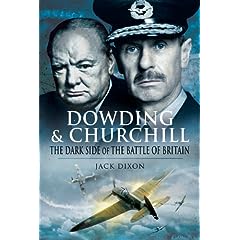 The following is a slightly edited excerpt from Dowding & Churchill: The Dark Side of the Battle of Britain (Pen and Sword, 2008).


A recent book by Geoffrey Best, entitled Churchill and War, contains not a single word about the Battle of Britain. Yet we find this statement: “Wars determined the course of history, and battles determined the outcomes of wars. Churchill wrote exceedingly well about battles, and not just because they absorbed and thrilled him. They settled the fate of nations.”[1] An earlier page, recounting his first days as prime minister in May 1940, tells us: “Being the leader at the time and persuading the Cabinet to support him – another momentous act of leadership ... – Churchill was able to swing the people his way, and by so doing to change the course of history.”
The air was the decisive strategic military arm of the Second World War, yet it seems that Churchill had not studied it as he had military history. We make this claim in the face of what Churchill himself had written much earlier:

"Except for the year 1916, I was continually in control of one or the other branch of the Air Service during the first eleven years of its existence. From 1911 to 1915 I was responsible at the Admiralty for the creation and development of the Royal Naval Air Service; from July, 1917, to the end of the War I was in charge of the design, manufacture and supply of all kinds of aircraft and air material needed for the War; and from 1919 to 1921 I was Air Minister as well as Secretary of State for War. Thus it happens to have fallen to my lot to have witnessed, and to some extent shaped in its initial phases, the whole of this tremendous new arm, undoubtedly destined to revolutionize war by land and sea, and possibly in the end to dominate or supersede armies and navies as we have known them...

"From the outset I was deeply interested in the air and vividly conscious of the changes which it must bring to every form of war."  [2]

Churchill remembered only too well, for he was both Minister for War Munitions and Minister for Air at the time. Churchill, like the British Government as a whole, was thoroughly alarmed about the morale of the people of the East End. (As it turned out, the politicians were running more scared than the workers.)
Salmond, for his part, was only too ready to point out that others were putting forward various defensive ideas which, together or separately, might well either actually destroy enemy aircraft, or at least have the effect of deflecting them from their course and so spare British cities and save British lives. It was easy for him, and other critics, to point out that Dowding did nothing but pooh-pooh all ideas other than his own. In war one must be flexible; one must be ready to consider all possibilities in such extreme circumstances, when the defence of the realm was paramount.
It will be remembered that Salmond wrote his report on night defence on September 18. It was brought up for discussion in the War Cabinet on October 7. Because of Dowding’s opposition to a number of its recommendations Churchill asked him to submit a counter-report to state his case about the issues he disagreed with. He singled out filtering which “had been disinterred by the Salmond committee” despite its “having little specific connection with night interception.”

To help New English Review continue to publish interesting and informative articles like this one, please click here.

If you have enjoyed this article and want to read more by Jack Dixon, please click here.

In Bahrain, Opposition to Normalization Unsurprisingly Greater Than In the UAE

Something round and rosy

Trump Hate Is Not Enough

Nigeria: 13-year-old sentenced to 10 years in prison for ‘blasphemous’ comments

Human Rights and the Moral Imagination

Has the Time Come to Scrap the Electoral College?

Imam of Great Mosque in Mecca Hints at Normalization with Israel

19-Sep-2020
Foreword to Gardeners vs. Designers by Brian Lee Crowley 19-Sep-2020
In Bahrain, Opposition to Normalization Unsurprisingly Greater Than In the UAE 19-Sep-2020
The Early Stalin on the Road to Tyranny