Bernard Kops Dancing in the Sunlight

a review by Thomas Ország-Land (December 2010) 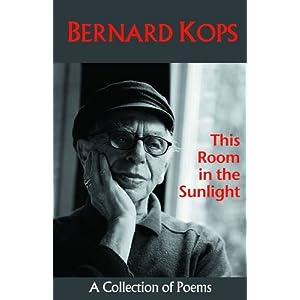 Among the greatest events of British literature this decade is the publication of the collected poems of Bernard Kops, the doyen of contemporary European verse.

His career began close to seven decades ago when he became the bard singing of the ruthless exploitation and callous neglect endured by the now bygone Jewish immigrant communities of London's East End -- their old men huddled around the wireless (his words) weeping tears of pride at weather forecasts from Radio Moscow. He has gone far beyond that.

Queen Elizabeth last year rewarded him, at the advice of Gordon Brown, then her prime minister, with a Civil List Pension in recognition of his service to literature. This is a very rare honour that he now shares with Lord Byron and William Wordsworth. Probably the only member of the British poetry-reading public still doggedly unaware that Kops has taken his rightful place among these literary giants is Kops himself.

Kops (b. 1926) is a top British dramatist, his plays performed worldwide for decades. He has written more than 40 plays, nine novels and two autobiographies. He runs a master-class for playwrights. But poetry remains for him, as he put it, the quintessence of everything in literature.

His plays have won many prizes and they have been performed in many translations. One of his recent classics, The Dreams of Anne Frank (1992), has been performed in Hungary, and it is now being translated into Czech to confront the rise of anti-Semitism sweeping Eastern Europe. The play is about the miracle of survival through the Holocaust that claimed Kops' large extended family in Amsterdam. Anne Frank's Fragments from Nowhere, a hugely powerful poem in the new collection, is a prayer for peace.

He is extraordinarily prolific. A sense of humour almost never deserts him. Here is how he says he experiences creativity:

You should never bribe or persuade them

...But wait until they enter and overwhelm


Kops is my teacher and my close friend. He is a spellbinding public speaker whose still frequent performances are often remembered in small detail by his audiences for years after such events. He is easily approachable, with informal manners radiating the warmth of a secure early childhood when he was spoilt by the love of his six elder sisters. But his face betrays the suffering endured by him as well as his extended family.

This is Kops' eighth collection of verse. The poems are mostly deceptively simple, insightful, dark-and-joyful and poignant. Many are already classics, having assumed lives of their own. The book includes more than 40 hitherto unpublished pieces among the old favourites describing the desperation of destitute communities dependent for survival on soup kitchens and pawnbrokers.

They also deal with Kops' own, quarter-century struggle with drug addition and an attempted suicide. Familiar literary figures crop up in the work, friends and idols like the First World War poet Isaac Rosenberg, another Jewish master from the East End of London, as well as W. H. Auden, Allen Ginsberg and the recently deceased Adrian Mitchell. The collection addresses death much too much for my comfort.

Kops' poetry combining touching simplicity with naked passion stems from an 18th century English literary tradition revived in the 20th century by Rosenberg. The poems project great empathy and deep emotional commitment, their power driven by a desperate, unconcealed awareness of the vulnerability of all living things.

The new collection contains something very Jewish but also very rare in Western literature -- a deeply felt recurring declaration of passionate, lifelong matrimonial love. The poet's muse, wife, lover, friend, editor, mentor and manager and the mother of his four children is Erica, a diminutive woman of enormous intensity, the sort of matriarch you might think Rachel of the Bible might have become if she had been granted a longer life. The collection is dedicated to her.

This is how Kops describes her in a train ride:

Beside me is a lovely girl

The sun strikes the amber of her dreaming eyes

I must get to know her.

She is my wife.

East London as Kops knew it no longer exists. The dockside Jewish communities once sheltering there from the Holocaust have moved on to the prosperous North-West London suburbs of Golders Green and Hampstead. Their place has been taken by more recent immigrant communities from South Asia, introducing to it their very differently exuberant culture. But East London has not forgotten Kops.

The collection opens with the poem Whitechapel Library, Aldgate East paying homage to that institution, once known as the university of the poor, that the poet used to attend as an ill-clad, hungry child feasting on literature. Today, lines of that poem grace the walls of the library, which now serves a splendid modern museum.

On a recent visit to the museum for a performance of a Kops play -- Whitechapel Dreams (2008), about an Asian teenager seeking refuge from her family at the library -- I watched young girls and stern matrons gaze at Kops fondly when they thought he did not notice. A bartender brought me free drinks when he become aware that I was in the poet's company.

Kops is a well known figure of the community. He stages plays there and holds poetry readings, lectures and theatrical workshops. The local press reports on his views and activities. Many residents warmly recognize him on streets and in restaurants.

Kops left school at 13 during the Blitz. He tried acting and the second-hand book trade, drifted through the bohemian world of Soho and won sudden, unexpected fame with his East End play The Hamlet of Stepney Green (1957).

That was drama steeped in the Yiddish theatrical tradition. It pioneered Britain's "New Wave" of "kitchen-sink" drama that was to sweep away a lot of entrenched theatrical conventions. He was hailed for it by the critics of the day as a significant trendsetter. But several of his subsequent plays were slaughtered by the press. A theatre performing his play Ezra (1981) about the anti-Semite American poet Ezra Pound was firebombed. Most of his life he was dogged by financial worries.

This Room in the Sunlight -- the final poem in the collection -- sings the joy of the simple, greatest pleasures of love, creativity and sharing. Kops' ability to issue such a book after the bleak decades of drug-induced breakdowns praises the steadfast, unflinching support of a strong and devoted wife.


THOMAS ORSZ?G-LAND is a poet and award-winning foreign correspondent who writes from London and his native Budapest. His last major work was Christmas in Auschwitz: Holocaust Poetry Translated from the Hungarian of Andr?s Mezei (Smokestcack, England, 2010).

If you enjoyed this article and want to read more by Thomas Ország-Land, please click here.

Fear and Loathing at Oberlin

Is the war on 'misinformation' a battle for truth, or for the turf?

How I Had to Fight My Publishers Over Everything

The Trans Movement and the Dictator Lurking Within Us

UK's anti-terrorism scheme too PC to prevent terror: Prevent programme is so fearful of seeming racist it may be unfit for purpose

28-Oct-2021
Fear and Loathing at Oberlin 28-Oct-2021
America’s Crime Reporters Often Seek an Audience Through Sensationalism 28-Oct-2021
Is the war on 'misinformation' a battle for truth, or for the turf?