Firearms play a large role in American history. Guns of every sort are used to settle issues great and small. Literature and film does not exaggerate so much as reflect the role of guns in American history and culture – although Hollywood body counts are more than a little fantastic.

The value at work here, enshrined in the Constitution, is that Americans did not give police, soldiers and criminals an exclusive franchise on deadly force. Call it defensive lethality. Gun ownership is closely related to a historical suspicion of intrusive or incompetent government. They also represent a kind of portable fair play. From the beginning, a gun was thought to be the great equalizer – the tool that levels the playing field. Indeed, that ubiquitous Colt six-shooter of the American West was called “the Peacemaker.” 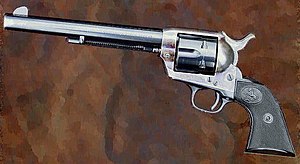 When citizens speak of “Second Amendment remedies,” such warnings were common, although rare today, up to and after the Civil War. Thomas Jefferson famously wrote of the periodic need to “water the tree of liberty” with the blood of patriots. His philosophical heirs exercised that license with a suicidal Civil War. Guns in the hands of recidivist Democrat Party vigilantes played a large role in enforcing Jim Crow laws for a hundred years after emancipation. Yet, even in the wake of armed insurrection, the nascent Republican Party did not seek to disarm cranky American individualists.

The primary objection to guns is political. Gun owners and their opponents have radically different world views. Gun owners do not trust their personal security to the city or state for pragmatic and philosophical reasons.

At the curb level, no municipal or state agency can guarantee the security of individuals or specific property. Crime statistics, especially in urban areas, support this belief. Police provide general community security, but specific lapses are too many and too troubling. Book keeping, like Compstat, monitors the ebb and flow of municipal mayhem, but such statistics, like public school audits, are too sensitive to careerism and political winds. Indeed, judicial process is calibrated also to accommodate the wants of criminals and political interests, not needs of victims or taxpayers. In short, gun advocates do not trust the state with personal safety. Overwhelming statistical evidence supports citizen skepticism.

Gun opponents, on the other hand, have little evidence to underwrite their faith in the state’s ability to provide personal security. Indeed, the nation’s capital, with arguably the highest per capita number of law officers of every stripe, has one of the highest crime rates in the country. Clearly, rates of violent street crime against individuals and property, especially in urban areas, can be influenced, but not controlled by police.

The philosophical differences between gun owners and their opponents are self evident; the former believe that individual rights and responsibilities are paramount; the later believes that individual prerogatives are subordinate to the state. This political divide has a long history and the gun control debate is just another chapter in that argument.

Beliefs about guns are more myth than science. Gun control dogma has little to do with evidence or reason. There is no correlation between gun ownership and homicide rates. The United States, where 40% of citizens own firearms, had a homicide rate (year 2006) of 5.70 deaths per 100,000 of population, only 3.72 were gun related. If the worst kill rates for cities (such as Baltimore 42.0, St. Louis 38.0, and Washington, DC 35.4) were extracted, the US homicide rate, given the high rate of legal owners, is comparable to any country in the world with draconian control laws.

If any political party is guilty by association, the Democrat Party has much to answer for. Indeed, in February, Boston congressman Michael Capuano (D) urged union members to "get bloody when necessary." Capuano holds Jack Kennedy's old seat. Most violent crime in the US occurs in large cities, like Boston, where constituents and their political mentors are Democrats. Chicago, the president’s home town, is twice as deadly as New York and three times as violent as Los Angeles.

Gun control advocates try to mask the statist argument with utopian terms like “common good.” Were this a sufficient argument, individual prerogatives such as automobiles, knives, axes, machetes, alcohol, matches, and mood altering drugs might be banned also.

There were 12,632 firearm homicides in 2007;  In the same year, 37,435 auto related deaths were reported. Approximately 40% of auto fatalities are alcohol related. Few states track, non-alcohol, drug related auto fatalities. Worldwide, nearly 40 million serious injuries and deaths are attributed to automobiles. This figure is projected to reach 50 million by 2020.

In the most recent genocide in Rwanda, nearly a million killed, the agent of death was an edged weapon or a club. Indeed, since WWII the deadliest weapon of choice worldwide is the machete. In medieval Europe, long before guns were common, the homicide rate in cities was thought to be 60.0. Then as now, no country seeks to decommission edged tools and weapons as a solution to violent crime.

Finland and Switzerland have some of the highest gun ownership rates in the world, yet their gun homicide rates are low (3.24 and 1.32 respectively). South Africa, in contrast, has had a homicide rate as high as 75.30 deaths per 100,000 - and few guns.  There are no concrete figures available on gun ownership, but non-gun homicides in South Africa account for twice as many deaths.

The Swiss example merits consideration in any gun debate. All eligible Swiss males are required to serve in the military and undergo annual small arms qualification. After service, Swiss men are allowed to retain their semi-automatic side and long arms at home. The Swiss government encourages shooting competitions and subsidizes ammunition. Almost all Swiss households possess small arms of one sort or another. Shooting is a national sport.

Swiss homicide rates are lower than Great Britain where most guns are banned. The second largest city, Geneva, reported no armed robberies in 1993. The Swiss experience contradicts the conventional anti-gun wisdom so dramatically that the United Nations often omits Switzerland in “studies” of small arms. Clearly, culture not hardware, drives the Swiss experience.

Any honest assessment of American culture recognizes the role of guns in history and contemporary civility – or lack of it. Gun advocates, for the most part see guns as personal insurance. Gun opponents, are tainted with hypocrisy; opposing legal gun ownership for innocents on the one hand while ignoring illegal gun violence among their guilty constituents.

Modern gun rhetoric on the right is just that; actual revolutionary and criminal gun violence has been the near exclusive franchise of big cities and the American left. The professional left is the last institution in America that should scold others for having “blood” on their hands.

A great civil war and all the rural violence of reconstruction was a Democrat Party legacy. Indeed, Jim Crow law and the associated 100 year reign of terror against black Americans was sponsored or ignored by Democrat politicians.

The failure of American “progressives” appears to be one of introspection; an unwillingness to look inward and accept adult responsibility. They also fail to acknowledge the legitimate fears and concerns of law abiding citizens who wish to take prudent precautions for the safety of their families. Liberals compound their error by insulting the intelligence of voters; attempting to blame violence on conservative rhetoric while ignoring the history and culture of criminal mayhem among their constituents.

H. Rap Brown (aka Jamil Abdullah Al-Amin), former Justice (sic) Minister for the Black Panthers, once said: “Violence is as American as cherry pie.” He was right. Unfortunately he failed to mention that he was speaking for himself, his politics, and his culture. In March 2000, Brown shot two police officers with an assault rifle. As one of the officers lay wounded, Brown executed him with three shots from a handgun.  Both officers were Black. Mr. Brown is now serving a life sentence for murder.

Just as guns and violence are not synonymous; legality and morality are not equivalent either. From a moral perspective, 16,000 US homicides a year could be compared to over a million legal abortions per year on average. Indeed, since 1973, there have been over 52 million abortions (300 abortions for every 1,000 live births). In New York City today, 40% of pregnancies are aborted. Homicide and infanticide are morally equivalent to the extent that they are acts of free will – or choices. For too many, abortion is just a more callous variety of birth control.

The hypocrisy associated with rare shooting incidents and other forms of pervasive urban violence is best illustrated by two recent cases; Jared Loughner of Tuscon and Dr. Kermit Gosnell of Philadelphia. The Loughner tragedy was a “one off” incident where nineteen people were shot, six fatally.  Good Samaritans intervened immediately to halt the mayhem.

Gosnell is an abortionist who according to the Philadelphia Inquirer was “a butcher of women and babies” for 30 years in spite of numerous complaints to city and state authorities. According to the Inquirer, Gosnell “routinely killed viable infants (with a scissors)…hundreds of them.” After failing three annual health inspections: “The state Health Department decided after 1993 to stop inspecting abortion clinics for ‘political reasons’.” Gosnell continued to kill until January, 2011 when he was arrested. No good Samaritans intervened on behalf of the women and children of Philadelphia.

Compared to abortion, gun homicide occupies the moral high ground; abortion is actually a false, if not arbitrary “choice.” Two of the three principals in abortion, the father and the child, have no say in the matter. On the question of guilt, homicide also has an advantage. In most shootings, the victims are other criminals, usually recidivists. All infanticide fatalities, like Gosnell’s victims, are innocents. If homicide is an arbitrary execution in the present, surely abortion is a premeditated crime against the future.

Urban apologists, like Paul Krugman in the New York Times and Larry McMurtry in the Washington Post, are whistling in the dark when they look to rhetoric in the wide open spaces of Arizona and Alaska for explanations.  They need look no further than their urban back yards for the roots of violence. Epidemic rates of mayhem, legal or otherwise, are peculiar to large cities and their politically correct constituencies. Unfortunately, speculations about violence seldom confront these troubling sources. And if numbers matter, big city crime and abortion, not guns, are the principal symptoms of any climate of hate or any cultures of violence in America today.


The author is a veteran of three violent combat tours; 17 years in the Bronx and two years in Vietnam. He also writes at G. Murphy Donovan and Agnotology in Journalism