Recently I went on holiday to Ruritania, a happy land somewhere in Central Europe. Happiness, in Ruritania, is measured in utils, and they have utils in spades. There I strolled round Streslau’s Castle Stronsk and through the Forest of Strudel, with its fauns, unicorns and jabberwocks. On Esmerelda’s advice, I took in performances of both La Triviata and Der Flibbertygibbert, which were second to many.

In addition to its unique flora and fauna and its unequalled productivity in widgets, Ruritania has a number of features that cannot be found anywhere else in the world. Here are just a few:

The True Islam. Outside Ruritania, Islam is often misunderstood. Uncomprehending Muslims blow themselves up, behead, burn effigies of the Pope, mistreat women and generally carry out activities that go against The True Islam. The True Islam is peaceful, tolerant and enlightened, but hard to find because it is always getting hijacked. Some cynics have argued that it is nowhere to be found. They are wrong. It is here, in Ruritania, where all contradictions are resolved.

The Fourth Horseman of the Apocalypse. You wait a long time for a Horseman of the Apocalypse, then four come at once. But you can never remember all four – you get Death, Pestilence and War, or sometimes Famine Pestilence and Death, but never all of them at once. Well, the one you can never remember is here in Ruritania, along with two of the Seven Wonders of the World, two of the Seven Deadly Sins, three of the Five Pillars of Islam, all five Habits of Effective Managers and the other Nine Commandments.

Lady Mondegrin loves a music-lover, and was attracted by Earl Amore’s record collection, particularly the rumour that he might have Ben E. King. Amore faced stiff competition from Lady M’s other musical suitors, including Hank Sodnashvili, a Country and Eastern singer from Tbilisi, Georgia, and a Japanese TV wonder who tried to woo her with a jazz chord. But to no avail, for the braw gallant knew his lady’s weakness for dairy products, and, gently rowing her down the stream, persuaded her that life with him would be one long merry butter dream.

Beggars making choices. Beggars cannot be choosers, they say. In Ruritania they can. You see many beggars proactively exercising choice. Here, too, old dogs easily learn new tricks, apples and oranges can be added together and a superfluity of cooks guarantees a superlatively good broth. And if beggars, old dogs or cooks make a pig’s ear out of their choices, tricks or broth, there is no need to worry, for that pig’s ear can easily be turned into a silk purse.

The Other Side of the Möbius Strip. A Möbius Strip, pictured here, is a surface with only one side. 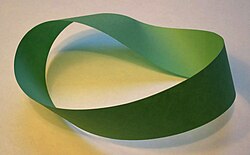 Outside Ruritania, that is. My own Möbius strip is crumpled and worn, as I have spent hours trying to find the other side. I tried catching it unawares, certain that the other side was there somewhere, but nothing worked. Then I took it to Ruritania and found it in an instant.

Oh, and remember that “impossible” Three Utilities Puzzle, where you have to get gas, electricity and water to houses A, B and C without any of the pipes crossing?

Well, in Ruritania, all houses are supplied in this way with not a crossed pipe to be found.

Native speakers of Esperanto. Outside Ruritania, Esperanto is believed to be an artificial language, created in the late 1800s by Lejzer Ludwik Zamenhof. But in Northern Ruritania, Esperanto has been spoken and written for thousands of years. Unlike any other living language, Northern Ruritanian Esperanto (Esperanto A) has a regular grammar that, along with its phonology, has remained unchanged in all this time. On being asked: “Ĉu vi parolas Esperanton?” I was delighted to try out the well-known Esperanto limerick:

How we laughed. However, my visit to Southern Ruritania wiped the smile off my face. Southern Ruritanian Esperanto (Esperanto B) was influenced by a Volapük substratum, which gave rise to a sound change that non-Esperantists and even speakers of Esperanto A find difficult. The consonant p has mutated into a consonant cluster, which may be represented very approximately as ll-kh-xh. The first part of this consonant cluster, -ll-, is like the initial sound of Welsh Llanelli, only more so. The middle element, -kh- is a more guttural version of the “–ch” in the Scottish word “loch”. The third element, -xh-, is a heavily aspirated version of the lateral click found also in Xhosa.

Those Volapukes have a lot to answer for, I thought, as I approached Southern Ruritania, wondering how I would manage to get my tongue round Esperanto B - or should I say Es-ll-kh-xh-eranto B? But I need not have worried. There, on the border, was a nicer-gloss.

I had come across many an isogloss, being the geographical boundary of a linguistic feature, but this was my first experience of the more user-friendly version. A nicer-gloss, found only in Ruritania, is a shiny red ribbon, which not only shows the boundary of a linguistic feature, but which ensures that the speaker automatically adopts the feature on crossing it. Imagine you are at the equator with a basin. Skip to one side and the water runs clockwise round the plughole. Skip to the other side and it runs anti-clockwise. So it was with the South-Ruritania nicer-gloss. I spent many an hour trying this out:

Implausible as this sounds, it worked perfectly. By the way, do not make the mistake of offering a native speaker of Volapük or Esperanto B a drink of water. It offends.

The Meaning of Guttari’s Sentence. The following quotation from the psychoanalyst Félix Guattari must mean something, because, as he says, “we can clearly see [it]." However, I confess that it meant nothing to me until I took it to Ruritania, where it was as clear as a bell:

We can clearly see that there is no bi-univocal correspondence between linear signifying links or archi-writing, depending on the author, and this multireferential, multi-dimensional machinic catalysis. The symmetry of scale, the transversality, the pathic non-discursive character of their expansion: all these dimensions remove us from the logic of the excluded middle and reinforce us in our dismissal of the ontological binarism we criticised previously.

I only wish I could explain the meaning, but sadly, the moment I stepped off Ruritanian soil, it slipped through my fingers again.

This list is by no means exhaustive, but one Ruritanian find deserves a special mention: that demmed elusive Pimpernel. Well, he had to be somewhere, didn’t he?

To comment on this article, click here. Mary is particularly keen to hear from native speakers of Volapük.

If you have enjoyed this article, and would like to read other articles by Mary Jackson, click here.

Mary Jackson contributes regularly to The Iconoclast, our Community Blog. Click here to see all her contributions, on which comments are welcome.

The Dog Days of the Police

Abbas Cuts Off His Nose to Spite His Face

The United States and the World Trade Organization

Expose the ‘Trump–Russia’ Plot — at All Levels