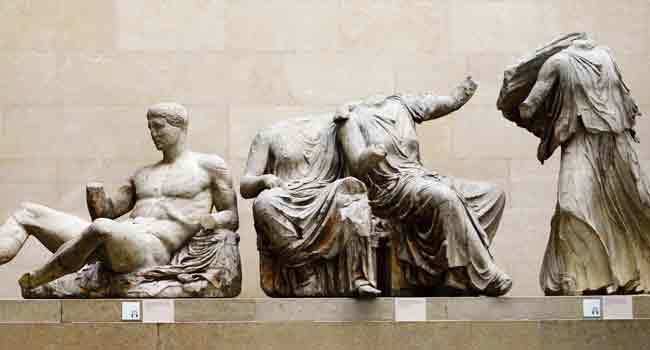 I’ve been sitting on a fence and it doesn’t make much sense, because the issue keeps me in suspense.

The internecine wars in Washington, D.C., continue over government funding, a coronavirus relief bill, government shutdown, but on September 9, 2020 one form of political truce between Republicans and Democrats on foreign affairs was announced. Eighteen members of the U.S. Congress, bilateral members of the Congressional Caucus on Hellenic issues, including the chairs of the House Oversight and Rules committees, and foreign affairs subcommittee on issues relating to Europe, had written a letter to British Prime Minister Boris Johnson.

It informed him, in case he didn’t know, that the Elgin marbles, EM, had been the source of controversy among allies for many decades. The letter urged the British government, already saddled by labyrinth Brexit discussions, to negotiate with the Greek government in earnest over the return of the Elgin marbles to Greece by 2021, the 200th anniversary of the modern Greek nation. The eighteen Congress people joined other Americans intruding in British affairs. On September 16, 2020 both Joe Biden and Nancy Pelosi said there can be no U.S.-UK trade deal if Brexit negotiations undermined the 1998 Good Friday peace agreement. However, the letter of the Congress group has raised the problem of the restitution of cultural objects taken from their country of origin.

Prime Minister Johnson does not need reminding that it was Thomas Bruce, Earl Elgin, British Ambassador to the Ottoman Empire, which included Greece, who took the marbles from the Parthenon in Athens, 1801-1805. The Parthenon, the central building of the Acropolis of Athens. was built around 488 B.C. to honor a goddess called Athena, and was at different times a Christian church and a mosque. The pillars and sculptures of the Parthenon were made of marble.

Elgin, with a passion for classical antiquities, made the case that the art works in the temples of Greece, then under Ottoman control would be destroyed because of Turkish indifference.  Some had been destroyed in 1687 when the Venetians attacked Athens.   The Sublime Porte granted Elgin’s request to take away pieces of stone with old inscriptions or figures. Perhaps this was gratitude for British action in blocking the advance of Napoleon in Egypt. Elgin took pediment sculptur friezes, metopes, and fragmented pieces from the walls of the Parthenon, and brought them to Britain. In 1816 he sold the sculptures to the British government which then sent them to the British Museum where they have remained.

Though the letter by the 18 members of Congress might be considered impertinent, it contained no threat of any kind but attempted to spark action on a disputed issue which has emotional appeal and symbolic importance, the presence of the Elgin marbles in the British Museum.  In recent years the issue has been raised by officials of the European Union as well as by  celebrated private citizens such as the actor George Clooney , and his  wife, and co-stars Bill Murray and Matt Damon, who while working on the 2014 film The Monuments Men, about art stolen by the Nazis, thought return of the Elgin marbles to Greece was the “right thing” to do.

A more dramatic, and informed, statement was the demand by 15 members of the European Union parliament in February 2020 that Michel Barnier, the French politician who is the EU chief negotiator on Brexit, use the post-Brexit trade talks to get the UK to return the marbles as part of a trade deal between UK and EU. The specific issue was related to the broader issue, the return or restitution of unlawfully removed cultural objects to their country of origin. Barnier referred to Article 167 (2) of the EU treaty of December 2007 by which the EU vowed to conserve and safeguard the cultural heritage of European significance. Questions were raised about that heritage, and the claims of the right of ownership, especially by Greece which argued in extreme fashion that the taking of the Elgin marbles was part of a blatant act of serial theft that was motivated by financial gain.

Regrettably, the EU has politized the difficult question of ownership of cultural property  by positing the Elgin marbles as a condition of  trade talks with Britain, adding to the already complicated  disputes of  migration, Northern Ireland, fisheries, and Gibraltar , while the British government  insists  that Elgin is irrelevant for discussion  of trade negotiations, as well as refusing international arbitration, and advice from members of U.S. Congress  and Hollywood stars, and maintaining that the marbles must remain in Britain.

The issue of whether the Elgin marbles, EM, should be returned to Greece is more complicated than political rhetoric or posturing on the subject. There is no easy answer to the question of return or remain of EM.  Advocates of both sides propound plausible points but for any decision a number of factors have to be considered:  legal, moral, emotional, national, and political reality.

Questions abound. A few may be mentioned. In a broad sense, are the laws of the three countries involved, Britain, Greece, Turkey, as well as international law, appropriate to deal with resolution of the issue? Did the Ottoman Empire, the ruling power over Greece, have the authority to allow the removal of the EM? In general, can a governing power dispose of someone else’s cultural property?  Was Lord Elgin really legally authorized to remove the EM?  There is no existing evidence, although what appears to be an inadequate copy in Italian exists, of a firman, the Ottoman royal decree, Turkish administrative document, that would have been issued by Sultan Selim III and given permission to Elgin. Even more controversial is a legal problem, does the passage of time affect the issue of claims for the return of cultural property?  A legal procedure, laches, may be relevant: this holds that a legal right or claim will not be enforced or allowed if there has been a lack of diligence, a long delay, in asserting it. On this issue the evidence of history is mixed: there is the example of the Stone of Scone to Scotland which was taken from Scotland in 1296 by Edward I as spoils of war to Westminster Abbey and finally returned in 1996.

On the general problem of restitution of property, the 1970 UNESCO convention, Article 7b,   says the cultural objects unlawfully  removed  shall be restored to original owner. This is universal since cultural property  is the cultural heritage of mankind. A UNESCO conference held in Mexico City in July-August 1982 proclaimed that restitution to their countries of origin of works illicitly removed  from them is a basic principle  of cultural   relations between peoples. It recommended return for two reasons; one was based on  the principle that pieces taken from national  monuments should be returned to those  monuments; the other was the general principle of the safeguarding  of the cultural heritage of mankind.

The case for return of the EM is based on a number of debatable factors. The EM are a major piece of Greek culture and belong to that culture in Athens, an integral part of a building symbolic  of the Greek cultural heritage. An early critic Byron, who participated in the Greek War of Liberation,  wrote , “Dull is the   eye that will not weep to see thy walls defaced, thy monument shrines  removed by British hands.” The EM  are an important part of Greek cultural nationalism and a symbol of   Greek civilization. As stated earlier, there is no exact record, no existing firman, that Elgin had official approval to remove the sculptures and bring them to Britain.  Moreover, it was not Greeks but Turks who allowed the removal. The Ottoman Empire was an occupying force, and its action in allowing removal of EM was not valid.

Greece insists  EM were stolen  and want them back. Indeed, the objects should be called the Parthenon sculptures not the Elgin marbles. The great actress  Melina Mercuri  at Oxford  in 1986  argued there was a Michelangelo “David” and a Da Vinci “Last Supper,” but no “Elgin” marbles.

Greece argues that at the present time the British Museum is not the best place to display EM. The better suggested venue is the New Archaeological museum, completed in 2007 and open to the public in June 2009. The museum, close to the Parthenon on the site of the Acropolis,   displays the  Parthenon sculptures not taken by Elgin, and puts  plaster copies    of the sculptures in the BM in their appropriate place in the frieze. If returned to Athens, the sculptures will not be exposed to the open air and pollution because of the new museum.

On one hand it can be argued that the British maintenance of EM has been costly. On the other hand, though the BM is free, Britain has benefitted from the tourists coming to London, anxious to see EM.

The case against return is that EM were not removed illegally, and  therefore legally belong  to UK. Greece has no legal claim to them since they were sold by legal means. The British Museum  has saved them from further damage  and preserved them from war damage or from  pollution in Athens that could have ruined them. The BM is one of the world’s great museums, attended by millions of visitors, and by scholars, and has made them aware of the history of Greece and the greatness of classical Greek civilization. One can, moreover, ask if the Greek demand is hypocritical. The National Archaelogical Museum in Athens contains a collection of Egypian antiques it is not prepared to return.

The dispute over repatriation continues.  Greece first formally asked for repartition in 1983.  A bill in UK to enable the British Museum to return EM was defeated in the House of Lords on October 27, 1983, and the official Greek request in April 1984 was rejected.

However, British public opinion differs from official policy. A poll of June 4, 2018, indicated that 56% of respondents thought EM belonged in Greece, 20% that they should stay in UK, and 20% were undecided.

The issue of Elgin is at the center of the general debate on cultural heritage and whether artefacts should be returned to their place of origin. There are precedents. The Wright brothers Kittyhawk aircraft was returned to the U.S.by the Science Museum in London in 1948;  Israel has sent thousands of items from the Sinai, pottery, gold ornaments, archaeological artefacts to Egypt in the 1990s; the Lydian Hound , the collection of 6th century B.C. gold and silver objects was returned by the NYC Met museum  to Turkey  in 1993; France in 2018 returned  26  works of art from Paris  to Benin.  Will the same repatriation be true for an important symbol of the Greek cultural heritage?

PrevNatanz Explosion Sent Message from Israel to Iran: If You Build It, We Will Come
Their Rantings Betray ThemNext