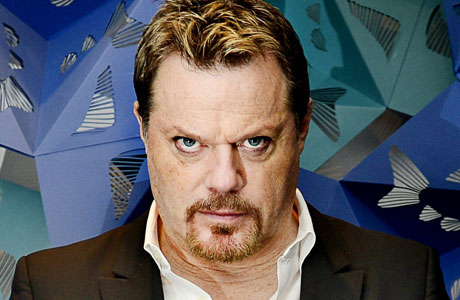 A saying attributed to the great boxer, the Brown Bomber Joe Louis, about to fight Billy Conn in June 1941 is “You can run but you can’t hide.” Conn did not hide and did well until he was knocked out in the 13th round. In March 2017 British comedian, actor, and writer, Eddie Izzard did not hide, nor was he knocked out, but he withdrew from running “for freedom” in a marathon run because of opposition to him on the part of the organizers, the Palestinian Campaign for the Cultural and Academic Boycott of Israel, and Artists for Palestine UK(APUK), part of the BDS (Boycott, Divestment, Sanctions) movement against Israel.

Eddie Izzard is an unusual figure, born in Aden, then a British colony and now part of Yemen, to British parents, well known for his stand-up comedy routine with stream of consciousness delivery, and rambling monologues, his outspokenness, and a private life that includes cross-dressing and ambivalent sexuality. His comedy routine is popular, but as a result of it he was accused of a heinous offense.

On March 30, 2017 Izzard had entertained an audience at the Shlomo Group Arena in Tel Aviv. Because of this gig, the Palestinian officials in control of the marathon that was held the next day, though not the official Palestinian Authority, said he could not run in the marathon. They refused to accept Izzard’s explanation that he was “trying to be balanced by doing something in Israel and then in the Occupied Palestinian Territories.”

Izzard is no stranger to political issues. He is a prominent supporter and heavy contributor to the British Labour Party, and may run for Mayor of London. He campaigned against Brexit and for the UK to stay in the European Union. He can be regarded as one of Britain’s prominent do-gooders. Among other things he is an Ambassador of UNICEF (UN Children’s Fund), travelling to various places like Djibouti to meet and comfort child refugees, to Iraq to report on Syrian children refugee crisis, and to Kenya. He provided help for Amnesty International in dealing with the breast cancer issue in Burma. He has donated money to various organizations: one is for the UK  veterans of World War II on whose behalf he travelled to Norway in June 2009 for a memorial event; another is Sport Relief, a charity event bringing together sport and entertainment.

It is ironic that Izzard was stopped, perhaps thought it best to stop, running in the Palestinian marathon. He is in fact well known for his performances in a number of marathons. In 2016 he ran 27 marathons in tribute to Nelson Mandela’s 27 years in prison during the South African apartheid regime. In 2009 he had run 43 marathons in 51 days for Sport Relief.

The bias of the Palestinian organizers is staggering in two ways. First, it made clear their intense animosity and intolerance towards even one who was not hostile: the chief organizer remarked, “Performing in Tel Aviv is equivalent to performing in Sun City during the time of apartheid, and there is no balancing act that can justify violating the Palestinian boycott call.” For this bellicose individual Izzard was whitewashing Israel’s occupation and apartheid system. The British APUK, said he couldn’t hunt with the hounds and run with the hare. They neglected that Izzard appeals to an international audience. At the Arena in Tel Aviv he performed in a number of languages, including Russian and Arabic.

The second aspect of bias is that the run in question, a 21 km marathon, drawing 5,500 registered runners, started from the Church of Nativity in  Bethlehem, went through two refugee camps, and alongside Israel’s western wall. Its object was ideological, to point out and emphasize for a wider audience, restriction on freedom of movement of Palestinians. But it had unexpected consequences. What it did show were the Palestinian restrictions on movements of Eddie Izzard.

Izzard is not a political extremist or immoderate street fighter. After his encounter with friendly Israelis and with intolerant Palestinians he now has the opportunity to comment on his experience. He can comment on the crucial difference between a real apartheid regime in South Africa where segregation was the law and upheld separation in housing, schools, hospitals, restaurants, toilets, and inability to vote, and the situation in the imperfect Israel which is not an apartheid state though differences exist. Izzard is aware of differences in Israel in the lives of Jews and Arabs, partly because of historical and cultural differences and partly because of security concerns that may result in separate roads. It should not be necessary, but it bears repeating that Arab citizens not only can vote in Israel, but hold positions in all sectors of society.

The basic problem about the treatment of Izzard is not simply its intolerance but it is the manifestation of the BDS, the discrimination movement against Israel. The BDS movement, founded in 2005 by 170 Palestinian organizations called ostensibly for an end to Israeli occupation  of the West Bank and Golan Heights, equality for Palestinian citizens of Israel, and the right of return for Palestinian refugees.

Eddie Izzard can make it clear. Not all advocates of BDS are extremists or are antisemitic. But for many of them the real or hidden agenda is not human rights or adherence to international law, but the destruction of the State of Israel. While president of Harvard university, Larry Summers asserted in relation to a BDS event that “serious and thoughtful people are advocating and taking actions that are antisemitic in their effect if not their intent.

The anti- Israel campaign by BDS has become more sophisticated. It no longer talks of throwing Jews into the sea, but is the latest device in a soft terror campaign for those seeking the end of Israel or “Zionism.” This is the time for a real “red line,” one dividing those who offer genuine criticism of Israel policy and suggestions to change them, and those who urge delegitimizing and extermination of the State of Israel, denying the right of the Jewish People to self-determination, and propounding antisemitism. As a result of his experience Eddie Izzard can help draw that line. The comedian will have the last laugh.

PrevThe Enlightenment has mutated, and this threatens our civilization
Inside Australia’s ‘Super mosque’ prison where guards fear radical Muslims are plotting terrorist actsNext