Fighting the Evil of Antisemitism 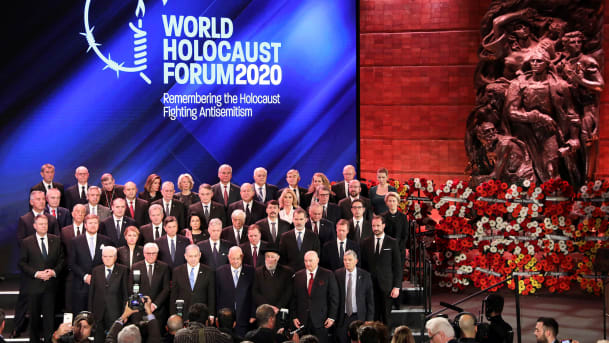 It’s a sin to tell a lie. Millions of people have lost their lives because lies were spoken.

On January 23, 2020 a gathering of the World Holocaust Forum, which coincided with the 75th anniversary of the liberation of Auschwitz was held at Yad Vashem, the Holocaust Remembrance Center in Israel.  The event was titled, “Remembering the Holocaust, Fighting Antisemitism.” At it, a well known prayer was recited. It was the “Shehecheyanu,” the Hebrew prayer articulated by Jews around the world: “Blessed are You Lord, Our God, King of the Universe, who has granted us life, sustained us, and enabled us to reach this occasion.” What was stunning and is significant is that it was uttered by the President of Germany, Walter-Frank Steinmeier. He bowed his head in deepest sorrow for the Holocaust, which he called the worst crime in the history of humanity, and he warned that the spirits of evil are emerging in the form of antisemitism.

How to explain the horrors that have and still occur in the world: genocide, massacres, terrorism, tortures, serial killers? Philosophers have struggled with the problem of evil, how to explain and reconcile its existence with or without any divine presence, and with the question of whether human beings are inclined to evil as well as to good. Simply, evil is the opposite or absence of good, manifested in personal fashion by demonic, profoundly wicked, morally bad, human beings. Literature is full of villains of this kind: Richard III, Iago, Macbeth, the Joker, Don Juan, Lucifer.

Life, for differing ideological perspectives, imitates art. The murderous dictator Joseph Stalin, heralded by some admirers as a victorious wartime leader and subject of a personality cult, was a notorious implementor of evil by mass executions, ethnic cleansing, deportations, causing famine that killed millions. One more recent example of an evil murderer is Osama bin Laden whose preoccupation was to kill Christians and Jews because of his fantasy that Islam was being attacked in Western European countries and the United States.

Another was Adolf Eichmann, whose nature was misunderstood by Hannah Arendt in portraying him as merely an intelligent bureaucrat of death for the Nazi regime, obeying orders but not an initiator of them. In fact, Eichmann was a murderous advocate of Nazi ideology, the expert for the SD, the intelligence agency of the SS, on Jewish matters.  He was convinced that the Jews had declared war on Germany. He gloried in his villainy. His only expressed regret was that only six million Jews had been killed by his Nazi regime. Though historians still dispute the origin of the Holocaust, whether it was functionalist or intentionalist, whether it was or was not a master plan launched by Adolf Hitler, there is no question that Hitler was personally responsible for fostering the Holocaust.

The world has witnessed in recent decades genocides in Rwanda, Croatia, the Balkans, and massacres in Syria, Libya, and Yemen, crimes not always punished. Various groups have been victims: Roma, Sinti, Rohingya, homosexuals, and political critics, but Jews have experienced the largest and most deadly fate.

Auschwitz, is the ultimate symbol, the iconic site of evil, with its gates of hell inscribed with “Arbeit Macht Frei”  and its use of  Zyklon B in gas chambers. At least 1.1 million Jews were murdered in the facilities using 3 main camps and 40 sub camps. At Auschwitz-Birkenau, 70% of those who entered, died.

The host site of the January Forum, Yad Vashem states that Auschwitz and the Holocaust have become paradigms to measure the human capacity to engage in radical, cruel, and systematic evil. The attempt to eradicate an entire people and culture was supported and even encouraged by age-old antisemitic tropes, some of which are present in our post-Holocaust global society.

The January Forum stems from a meeting convened in Stockholm by the former Swedish prime minister, Goran Persson. Its outcome was The Declaration of the Stockholm International Forum on the Holocaust  in 2000 which was the founding document of the International Holocaust Remembrance Alliance. It called for a task force for international cooperation on Holocaust education, remembrance, and research.

The Declaration held that the unprecedented character of the Holocaust will always hold universal meaning. The representatives of the 46 governments present at the event held that the magnitude of the Holocaust planned and carried out by the Nazis must forever be seared in our collective memories. They agreed that the international community shares a solemn responsibility to fight the evils of genocide, ethnic cleansing, racism, antisemitism, and xenophobia. They shared a commitment to commemorate the victims of the Holocaust and to honor those who stood against it.

The January 23, 2020 Forum in Jerusalem was attended by a host of world famous dignitaries; Mike Pence, U.S. vice-president, Prince Charles, Vladimir Putin, Emmanuel Macron, Nancy Pelosi, kings and presidents of a number of countries, and Serge Klarsfeld, famous hunter and bringing to justice of Nazis.

It was also a battle over history as well as over the perpetrators of evil. It provided an opportunity for the leaders to express their views on various subjects.

Poland was absent because the president was told he could not speak at the Israeli event because of a dispute with Putin who had said Poland shared responsibility for World War II. Polish president Andrzej Duda accused Putin of spreading a historical lie about Poland and called Putin’s remarks a kind of post-Stalinist revisionism.

Israeli prime minister Benjamin Netanyahu said there must be no compromises with radical regimes with murderous ideologies: “We must stop them in time, we must stand together in a broad international front.” He specifically castigated Iran, which he called the most antisemitic regime on the planet. He called on all governments to join in the vital effort of confronting Iran. VP Mike Pence also described Iran as the one country that denies the Holocaust as a matter of state policy and threatens to wipe Israel off the map.

Prince Charles talked of hatred and intolerance still lurking in the human heart. He spoke of the Holocaust as the story of incomparable inhumanity, from which all humanity can and must learn. Prince Charles planted a tree at the Israeli president’s residence. Mike Pence, accompanied by Netanyahu, put a note in the crevices of the Western Wall in Jerusalem.

Putin praised his own compatriots and their sufferings, pointing out that 40% of Jewish Holocaust victims were Soviet Jews. He commemorated the people of Leningrad, now St. Petersburg, who endured a 1940 siege, and where an estimated number, 600,000-1.5 million were killed. His father was one those fighting against the siege, and his 3 year old brother had died during the blockade. He criticized Poland which had snubbed the event.

Putin helped inaugurate a memorial to the victims of the siege of Leningrad. It is a Memorial Candle monument in Sacher Park in Jerusalem designed by a team of Russian and Israeli architects. It is a large 8.5 meter high brass steel column with a cast bronze element representing a candle that is illuminated at nighttime to give the effect of an eternally burning flame, honoring those who died in Leningrad.

The intention of the Forum is that it can lead to an action plan to fight antisemitism aggressively. This is a formidable task as public opinion polls of recent years show. Among the findings is that one third of Europeans know only a little or nothing about the Holocaust. One European out of 20 has never heard of the Holocaust. In France, one in five of those aged 18-34 have never heard of it.  In Austria, birthplace of Hitler, 12% of the young had not heard. In the U.S., 10% of adults and one in five of millennials were not sure they had heard of the Holocaust. Half of the millennials, and 45% of U.S adults could not name a single concentration camp of the Nazis.

The dilemma is whether the outcome of the Forum will end the dark shadow of antisemitism. History reminds us that the International Committee of the Red Cross ,ICRC, based in Geneva, did not, until late 1942,  interfere with or was largely silent about the Nazi treatment of Jews, and only became active when it seemed that Germany was going to be defeated. Similarly, in what is still a highly contentious issue, the U.S. did not bomb Auschwitz even after the horrors of the Holocaust were known. The given reason by the U.S. State and War departments that bombing would divert bombers from the battle zones is dubious.

Perhaps it is utopian to believe that sin can ever be removed, but malevolence must not be allowed to stand or triumph. It is outrageous that some misguided people believe that Jews talk too much about the Holocaust. They should know the combat against the sin of antisemitism must continue. Hitler must not win. The World Forum must lead to an active force in keeping Hitler dead.