From the Times, Breitbart the Independent and the Daily Mail

A leader of one of Britain’s most prominent mosques is a ruling member of Hamas, which is designated a terrorist organisation.

Mohammed Sawalha, a trustee of the Finsbury Park Mosque in north London, has been appointed a member of the political bureau of Hamas. He had previously been described in the press as ‘a fugitive Hamas commander’ He now seems to be very well placed and highly regarded.

He travelled to Moscow that month as part of a Hamas delegation, which held a meeting with Mikhail Bogdanov, President Putin’s Middle East envoy, and a deputy foreign minister, according to the website Al-Monitor.

Hamas released photos of the three-hour meeting in September, where it said delegates discussed its reconciliation with the Palestinian Authority and alleged Israeli abuses against Palestinians in Gaza, West Bank and East Jerusalem. One of those photographs is below. 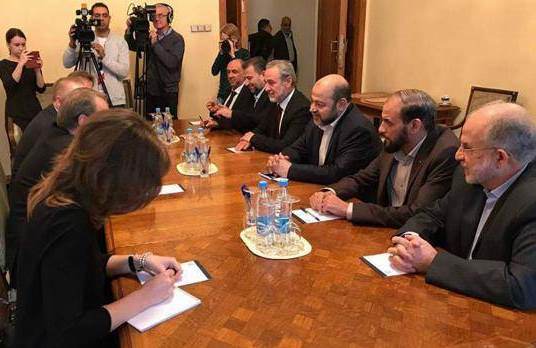 In the UK, only Hamas’s militant wing is classed a terror group – despite the political wing being outlawed by the U.S. and EU – meaning Mr. Sawalha has not broken British law.

Mr Sawalha, 56, arrived in Britain as a refugee in the early 1990s. He lives with his family in a £500,000 council house in Kingsbury, northwest London. However, in 2008 he was named in U.S. court documents as having previously been “in charge of Hamas terrorist operations in the West Bank” and was accused of meeting men laundering millions of dollars to finance the group.

Mr Sawalha was a director for nine years of the Islam Expo, which promoted Islamic lifestyles, is a former president of the British Muslim Initiative, a former director of the Muslim Association of Britain and has organised aid convoys to Gaza. He was appointed a trustee of the Finsbury Park Mosque in 2010, making him legally responsible for overseeing its management.

The mosque was once notorious for its links to hate preacher Abu Hamza, shoe-bomber Richard Reid, and 9/11 conspirator Zacarias Moussaoui before it was reformed and reopened in 2005. 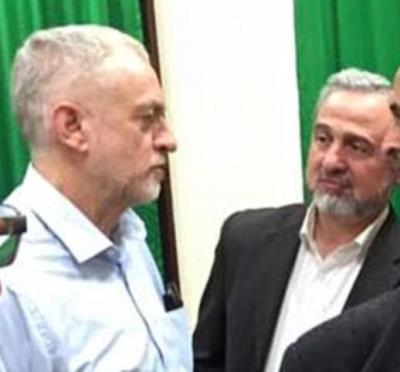 Labour leader Jeremy Corbyn is a regular guest, with the mosque sitting in his constituency. Last month, he attended a meeting on “Hate Crime Against Muslim Women” that was also attended by local police officers.
Left – Corbyn and Sawalha discussing the price of fish at the mosque in November 2015

Asked how Mr Sawalha’s position in Hamas squared with Finsbury Park Mosque’s values, a spokesperson said: “We were not aware about this news till recently made public in [The Times].  We are looking at the situation and the mosque will be issuing a statement in the next couple of days. We would like to confirm that the mosque has no relationship with Hamas.”

The group has not yet responded to The Independent’s request for comment and Mr Sawalha could not immediately be reached.