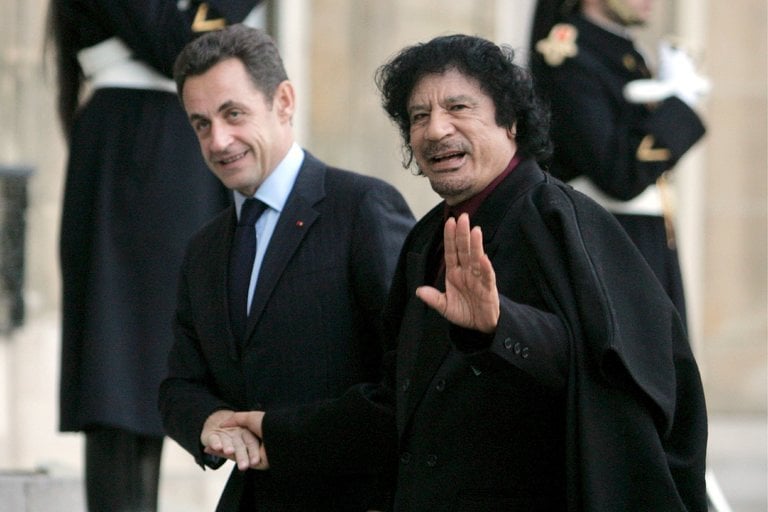 Was the presidential election swayed by the use of illegal funding for campaigns or by outside influence?  In the United States the issue is arguable and polemical and remains a moot question. Now the issue has become potentially politically explosive in France. We don’t need the song to tell us that every moment of the year we love Paris when it sizzles with political scandal. Other countries of course have their own versions of infamous financial and political transgressions, whether in the Congo, Nigeria, Ivory Coast, Gabon, Equitorial  Guinea, or the U.S., but none of them can ever reprise those in the French capital where the trees are said to be dressed for spring.

Sarkozy was examined by French police in connection with a probe into alleged financing by Libyan dictator Muammar Gaddafi  for Sarkozy’s campaign for president in 2007 which he won. After examination, authorities have brought preliminary charges against him for corruption. If convicted this would not only end ambitions for his political career but also carry a sentence of up to ten years in prison. He has been barred from traveling to a number of countries.

Are these charges against Sarkozy poetic justice? Previous French political leaders have been involved in venal behavior. Particularly dishonorable was conduct that stemmed from the neo-colonial and paternalistic system known as francafrique, with networks and unofficial emisaries, originally devised to influence policies and actions of leaders in former French African colonies after their countries became independent in 1960. Over the years francafrique appeared to change into France a fric, Africa as a source of cash and gifts.  President Valerie Giscard d’Estaing received large gifts of diamonds from Jean-Bedel Bokassa, self-proclaimed Emperor of the Central African Republic. It was relevation of these gifts that led to Giscard’s failure to be reelected president in 1981. Former president Francois Mitterand was also accused of receiving gifts of diamonds from corrupt African despots, especially from Congo and Gabon.

African leaders are also alleged to have given cash  to former president Jacques Chirac and former prime minister Dominique de Villepin for help in funding electoral campaigns. A Paris lawyer and political operator in the shadows, Robert Bourgi, confessed he delivered thousands of dollars in cash from Africans to Chirac and Villepin delivered not only in briefcases, but also in a set of African drums, and sports bag. He complained he got a backache from carrying the money. He claimed five African heads of state, including Mobutu president of Zaire (Congo),  and leaders of Ivory Coast and Gabon, paid about $10 million towards Chirac’s 2002 election campaign.

Other problems involved behavior within metropolitan France. Former president Jacques Chirac was convicted for misusing funds when he, as Mayor of Paris, 1977-1995, gave 28 “phantom employees” civil service jobs paid for by City Hall for work done for RPR, his political party. Chirac, the first head of state to be convicted since Marshal Petain in 1945, got two years suspended sentence for embezzling public funds, abuse of trust, and illegal conflict of interest. A property dealer and banker, Jean-Claude Mery, collected illegal funds from companies for Chirac and RPR through managing public works contracts, and claimed he gave £500,000 to an aide of Chirac.

On January 30, 2004 Alain Juppe, prime minister, 1995-7,  Mayor of Bordeaux , head of the center right UMP party, and presidential hopeful, was found guilty of corruption, and barred fom holding public office for a decade. He had, when Chirac was Mayor, misused City of Paris public funds to pay salaries of political alllies, party workers. The paradox in his case is the fact that he would have challenged Sarkozy for the presidency and probably won.

Nicolas Sarkozy has led a complex colorful life, including  marriage to the beautiful Carla Bruni, French-Italian model and songwriter, whom he married in 2008. A soccer fan and cyclist, he has been critically appraised for his “bling bling” high life style, expensive suits, stylish sunglasses, friend of Johnny Hallyday and hip hop rapper Doc Gyneco. But his legal and political problems stem from allegations in a number of cases connected to electoral campaign funding.

One of them is the financing of his campaign, which failed, for president in 2012 when he was defeated by Francois Hollande. Known as the “Bygmalion affair,” the charge is that Sarkozy’s campaign engaged in a system of false acounting to conceal the very large overspending, more than 11 million euros, mostly on rallies and U.S. like stadium events. The politician Jean-Francois Cope, then leader of Sarkozy’s UMP, was forced to resign from his position for involvement in the affair.

Another is the case of Eric Woerth, then minister of labor and treasurer of the UMP, Sarkozy’s party, who was accused of getting money 150,000 euros in cash from Liliane Bettencourt, L’Oreal heiress and richest woman in France, in March 2007 to fund Sarkozy’s campaign.

Sarkozy had a complex relationship with the bloodthirsty dictator Muammar Gaddafi, the unsavory character, the corrupt archetype of African dictators, held responsible of blowing up in 1988 Pan Am flight 103 over Lockerbie, Scotland, as well as for other terrorist acts and mass killings. Sarkozy in July 2007 negotiated the release of five Bulgarian nurses and a Palestinian, convicted of infecting Libyan children with HIV. He hosted in December 2007 a five day visit to Paris of  the “Brother Leader” who set up a Bedouin tent near the Elysee Palace, the official residence of the president. However, the relationship changed when he and British Prime Minister David Cameron led NATO air strikes to support rebels against Libyan military forces. These strikes led to civil war in Libya, the assassination of Gaddafi and the end of his regime after 41 years, and the beginning of the mass migration of Libyans that has perplexed Europe.

Sarkozy’s present difficulties stem from allegations that Gaddafi gave his electoral campaign 50 million euros, more than $60 million, in illicit funds. The case started in March 2011 with a demand made on French TV by Saif Gaddafi, a son of the dictator, that Sarkozy give back the money he got from his father. It became more serious in April 2012 when a businessman and alleged arms dealer named Ziad Takieddine, uncle of Amal Clooney, the Lebanese-British barrister married to film star George, claimed he personally carried five million euros in 200 euro and 500 euro notes in suitcases stuffed with cash in late 2006 and early 2007 to give to Sarkozy’s chief of staff, Claude Gueant when Sarkozy was minister of the interior and interested in running for president. .

The case was spurred by the arrest in London of Alexandre Douhri, French-Algerian businessman resident in Switzerland, accused by France of fraud and money laundering, funneling money, said to be 500,000 euros, from Gaddafi to Gueant for Sarkozy’s campaign. Douhri is fighting extradition to France.

Sarkozy has launched a counter offensive against his accusers whom he terms the “Gaddafi gang of assassins.” However, even if the affair does not reek of camembert, it is significant for rethinking the issue of limits that might be imposed on electoral campaign spending. It is certainly relevant to the U.S. case of McCutcheon v. Federal Electoral Commission of April 2, 2014 decided by the Supreme Court on a 5-4 decision. Sarkozy’s problem should lead to further thoughts on the Court’s decision to declare that limits imposed on the contributions individuals can make over a two year period to national party and federal candidate committees were unconstitutonal.

PrevSpain: Ten Algerians Arrested For Sexual Abuse of Underage Girls
Child sex gang of seven ‘predatory’ men who abused girls as young as 13 in a ‘s*** wagon’ with licence plate ending ‘SHG’ are convicted after jury took 24 DAYS to reach their verdictNext