From France 24 and the French edition of The Local

French women who’ve joined the Islamic State have been underestimated as just housewives by French authorities, a new report by the country’s Department of Justice concludes. As France searches for preventative solutions to the issue of home grown extremists joining IS, an official document has emergedwhich goes against the steroetypical profile of the “French jihadist”. 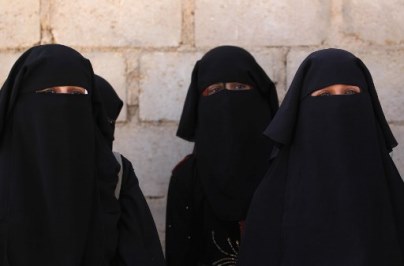 The report, which France’s Le Monde newspaper has had access to, states that France’s Department of Justice has overlooked the role women have been playing for the Islamic terrorism group in Syria.

France’s Criminal Affairs division recently carried out the studytitled “Women of Jihad” based on the court hearings of “muharijat”, French women who returned t France after joining IS in Syria. Although several French women were forced into joining IS by their husbands, most of the ‘muhajirat’ (female recruits) interviewed on their return expressed an attachment to the jihadist project,”

“They describe their involvement as being a result of their aversion for the West, and of a feeling of victimisation and attraction for the caliphate, which they see as a way of living their faith free from Western oppression,”

The study, written for magistrates, highlights the importance of these women in the running of the organisation. Their role went beyond providing domestic help to producing heirs and educating future fighters.This begs the question of these women’s responsibility regarding children’s exposure to violence there, such as showing them scenes of executions.

Contrary to jihadist ideology that states that women do not fight, some of these women were given an operational role in the Islamic police – the ‘hisbaa’ – such as carrying out punishments or luring future fighters on the internet. This doctrine has also been bent at times of military weakness, Le Monde points out. In October last year, in the weekly publication Al-Naba, the IS group put out a call for women to join men on the battlefield.

All these findings point to the need of monitoring women very carefully on their return, the document concludes. “We may have been a bit naïve, thinking women were following their husbands and just sticking to domestic chores in Syria”

That said, the greatest threat remains with radicalised women at home, who have not been able to join the ‘caliphate’.“Unable to fight … these female affiliates can still fully take part in the discipline of the jihadist groups in Europe . . . the threat at home remains very high”.