FTX Scandal Exposes ‘Woke’ as the Crime Syndicate of Our Times 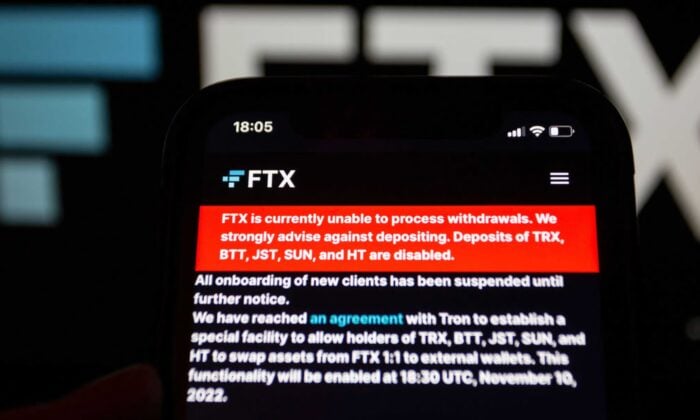 You or your living descendants are no longer the “capo di tutti capi” when it comes to American crime syndicates, not even close.

The numbers don’t lie. (Well, they do, but in a different way.)

The ideology known as “woke” has superseded you and put you to shame. It’s a more powerful syndicate with more corrupt allies in high places than you could find in a Francis Ford Coppola movie, even if the director made 50 Godfather sequels.

They include—but aren’t limited to—almost all the mainstream media, our fanciest universities, most of our large corporations and banks, a fair swatch of those who call themselves pundits or experts, virtually the entire Democratic Party, and too much of the Republican Party as well.

They have all been drinking from the same trough, slurping down as much cash as possible, only looking up to assure everyone they’re “anti-racist,” support transgenderism from age 4, believe there should be as many pronouns as there are stars in the Milky Way with bathrooms to match, fly only in solar-powered private jets and, yes, fat-shaming should be punishable by 20-years-to life while drivers who run over police squadrons should be released with an apology and their cars detailed… or whatever other absolutely meretricious virtue-signaling is going on that day.

Yes, the mafia would take care of its people and maybe bribe a few cops and politicians, although they never thought to paint themselves as the social justice saviors of humanity—where the real money is.

This was the game when Sam Bankman-Fried, the erstwhile crypto wunderkind of FTX fame, came along to demonstrate to the world just what “woke” is—virtually the biggest confidence racket of all time, totally disgusting and hypocritical in every way.

Will justice be served?

Not likely because young Sam donated $40 million of other people’s money to the Democratic Party, thereby, as much as anybody—save George Soros perhaps—blunting the Red Wave.

Rep. Maxine Waters and other highly moral American statesmen and women will protect him because, after all, he had the good sense to give them money, irrespective of where it came from.

More than Enron, more than Madoff, this is the paradigm case of the United States in our times.

Greed has taken over society to such a degree no one can see straight, let alone see such obvious fakery when it’s in front of their eyes, especially when “social justice” pronouncements are there playing the role of papal dispensations without the inconvenience of any thoughts of God or the afterlife.

Bankman-Fried wouldn’t have happened if all kinds of people and organizations, celebrated and uncelebrated, didn’t want, above anything else, more and more of the cash from that trough.

No matter. As Gordon Gecko assured us in “Wall Street”: “Greed is good.”

These days, it’s practically orgasmic. Watching the various talking heads before his unmasking, extolling the supposed crypto genius as the next Carnegie or Vanderbilt is an object lesson in how these people think. (Make me rich, please, please—especially if I don’t have to do any work for it.)

Ditto for the various celebrities on his bandwagon—Larry David, Tom Brady. Who knows if they even understand what blockchain is, but they love the cash and it’s seemingly hip to invest in crypto—above the curve, doncha know?

But who is this Bankman-Fried really and what would make him think he could actually do things such as create a “back door” between his two allegedly separate companies FTX and Alameda, so he could do what he would with other people’s money?

Yes, he looks like a Rip Van Winkle holdover awakened from a Big Brother and the Holding Company concert, circa 1967. Maybe that was a plus—made him seem “cool” to his customers.

But where do those totally amoral, actually immoral, values come from that allowed him to instigate, whether he intended it or not, one of the great crimes of all time?

It’s a mystery but one thing above all seems highly likely.

Sam Bankman-Fried and his cohorts at FTX/Alameda don’t believe in God on any level we would recognize.

Ten Commandments—where are they on blockchain?

Not just in the woke world, but in much of American society, belief in God has disappeared or is vanishing.

For a country founded in the Judeo–Christian tradition, that’s a problem with terminal overtones.

Frankly, I preferred the mafia.