George Washington Taken from the Heights 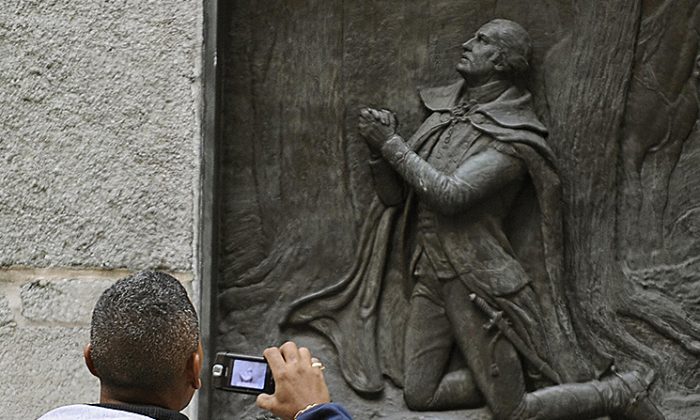 By Jove, by Jing, by George is the thing! Can we say it isn’t so?  We thought we knew Washington. As the Proverb says, a good name is rather to be chosen than great riches. It’s taken some time for the truth to be revealed, though no doubt a Special Counsel searching for less good names would have taken even longer to find out whether among other things the Father of the United States was in collusion with the Russians. But finally he has been unmasked.

The result of the discovery is that a stone plaque that reads “in memory of George Washington” presently on the left side of the altar at the Episcopal Christ Church in Alexandria, Virginia, is being taken down. Washington helped found the Church, attended the Church for more than 20 years, and bought a pew in 1773 when the Church opened. He would have mixed feelings that a similar plaque erected at same time in 1870, placed on the right side of the altar, honoring General Robert E. Lee will also be removed. Left and right  in the Church are said to balance each other, and illustrate equal erasing of the history of the two warriors.

General Lee was a regular attender of the Church since infancy, and his daughter left it $10,000 in her will, a significant part of its endowmewnt. As if in automatic response, the Church’s decision came after the violent rally in  Charlottesville over the statue of Lee, and the consequent ongoing debate, physical and political, over the symbols of the Confederacy, the legacy of slavery, and the disenfranchishment of people of color.

Poor Robert E. Lee who is now the point man, the national target of the pious and the irreverent alike. Statues of him in a number of Southern cities have him a-moldering in his grave. A Church in Washington has changed its name from R. E. Lee to Greek Episcopal Church, and the Washington National Cathedral has removed a stained glass window with the image of Lee lest it affect the sight and the soul of worshippers.

Obviously, more surprising than the erasing of Lee was the decision to remove all traces of Washington which according to the Rector of the Church, Rev. Noelle York-Simmons, was made by a unanimous vote of the vestry. The given reason was that the plaques may make some visitors feel uncomfortable or unsafe, and the congregation bravely if incomprehensibly feels there is a strong need for the Church to stand clearly on the side of “all are welcome, no exceptions.” Even with a “strong need,” it requires a strong secular imagination to see how the plaques create a disturbance in the Church or pose an obstacle to its identity and reputation as a “Welcoming Church.”

Everyone knows that Washington did not fight for the Confereracy or the slave cause but he did own slaves. Indeed he became a slave owner at age 11 after his father died and left him 10 slaves and the large 280 acre family farm.  During his life he bought more slaves housed at Mount Vernon as well as acquiring some more owned by his wife’s first husband who had left them to her after he died without a will. Two hundred and fifty years later the pious in Virginia are disquieted by the memory of this.

One can only commiserate with the parishioners at Christ Church who are facing certain problems. One is their inability to resort to a compromise proposed elsewhere regarding the removal of monuments, that they be replaced by information about the context regarding the actions of the individual being removed. The Church leaders said their place is one of worship, not a museum, and there is no appropriate way  to inform visitors about the history of the plaques. Far more important and immediate is the practical dilemma: will the Church accept donations of $1 bills with the face of the unacceptable Washington?

We know that George was not alone in his alleged transgressions. In all, 12 United States Presidents owned slaves, the last being Ulysses S. Grant, who in fact freed his only known slave in 1859 though he managed his father-in-law’s large plantation in Missouri. Can we soon expect the citizens of the Upper West side of New York City to demand the removal of Grant from Grant’s tomb in Manhattan?

Other presidents are being disowned. In 2015, State Democratic parties in Iowa, Georgia, Connecticut, and Missouri renamed their annual Jackson and Jefferson fundraising dinners. In view of the success of the musical Hamilton it is unlikely that this majestic heroic figure will be dishonored though his story is ambiguous. The author Ron Chernow. on whose biography the Broadway musical is based, believes that Hamilton may have owned two household slaves and negotiated the sale of slaves. Success on Broadway is more meaningful than rhetorical consistency. Equally ambiguous is the case of James Madison, who viewed slavery as a dreadful calamity, and a “blot on our free country, that should be erased,” but who owned about 100 slaves. No doubt the James Madison Program at Princeton University will prevent his elimination.

One president who did not own slaves was Abraham Linvcoln who came from Illinois which was a “Free State” in which residents could not own slaves. Though Honest Abe early in his career thought that colonialization was the solution, so that blacks should be settled in Africa and Central America, he changed his mind and is an honored  historical figure with his issuing of the preliminary Emancipation Proclamation of September 22, 1862. He proclaimed that all slaves in states in rebellion against the Union “shall be then, thenceforward, and forever free.”

Surely, if one president is to remain universally honored it would be Honest Abe. But his statue was threatened in 2016 and remains threatened at the University of Wisconsin-Madison by a group of Native American students calling for authorities to “Decolonize our campus.” Identity politics has run riot there as elsewhere, purportedly seeking redress in the present for grievances of the past.Political and cultural wars continue.

The reason for the campaign against Lincoln is that in 1862 after a rebellion concerning money that had been promised to them but never delivered, the local Sioux Dakota Indians rebelled and killed more than 400 settlers.   They were defeated and 300 were sentenced to death for crimes against civilians. Lincoln, who needed peace in the area while the Civil War raged, pardoned most of them but 38 were executed.

What is significant here is not simply the mistaken belief of the students that the great emancipator had owned slaves but that it was also declared by a candidate for the Wisconson Supreme Court, Jo Anne Kloppenburg who held at the same time Lincoln had led “this country in emancipating black people from slavery.”

One of the great Americans James Madison warned that faction are sown into the nature of humans. It is high time that public officials, educators, and Supreme Court judges, help emancipate those factions from the erasing of American history.