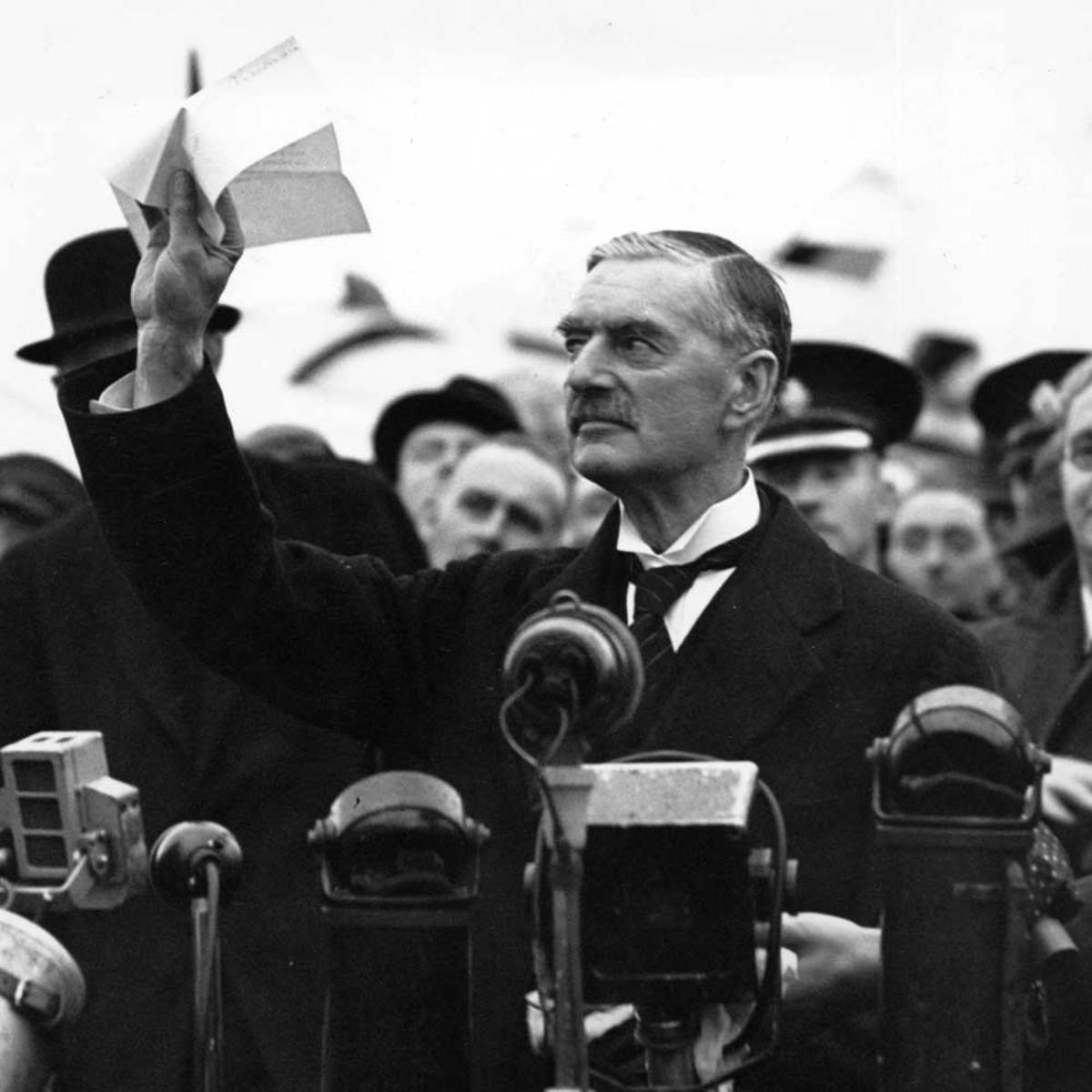 There is no shortage of evil villains in history or in literature. It can be assumed that human nature is complex and that elements of good can co-exist in individuals with evil, even though evil can be regarded as the antithesis of good. Yet, even if there is legitimate disagreement over the definition and nature of good and evil and even over the reasons, theological or secular, for the existence of evil, the distinction  is clear. A general consensus would accept individuals, Einstein, Mother Theresa, Martin Luther King, Jr., Abraham Lincoln, Buddha, as “good.” Equally, the list of individuals regarded as evil extends throughout history from Attila the Hun to Genghis Khan, Osama bin Laden, Saddam Hussein to Stalin and Hitler. And there are individuals who can be categorized as “guilty” because of serious failed policies or surrender in the face of threats whose actions resulted  in political or national humiliation.

In life, as in fiction, individuals may be motivated to act in evil fashion by malice, by ideological hatred of victims, by wanting to impress superiors, by carrying out orders or instructions, by hunger to advance their careers. These philosophical issues are pertinent in consideration of two recent events, a new film and the anniversary of one of the most macabre meetings in history, which can illustrate the difference between well- meaning mistakes and evil, a contrast between the behavior of Neville Chamberlain, British Conservative Prime Minister, 1937-1940, and Adolf Eichmann and the Nazi German regime.

Chamberlain is best known as the proponent of the policy of appeasement towards Hitler and the Nazi regime. He became the epitome of  the failed leader, the man who lost a confidence vote in the House of Commons and who was succeeded as prime minister by Winston Churchill, high profile figure who offered the country nothing but blood, toil,  tears, and sweat, and has been heralded as the hero of 1940.

A milder revisionist view of Chamberlain is presented in a new film, Munich, the Edge of War, which suggests a reconsideration of the Munich Agreement of September 30, 1938.

The  Agreement was justified by Chamberlain on several grounds, mainly as giving Britain time to prepare for the evident war, an action that he hoped would save millions from the horrors of war. It was in general accord with the mood of the country at that time. Yet, this defense is not altogether plausible because  it also gave Hitler more time to arm, and neutralized for him, for a time, the threat of the Soviet Union .

Chamberlain can be seen as more acceptable for some policy decisions. He advised the King to send for the then less popular Churchill  to succeed him as prime minister rather than choose Lord Halifax who was more acceptable to the ruling Conservative party at that time.

He rejected the idea of a peace deal with Germany which Halifax had suggested. He opposed any approach to Mussolini, believing this would serve no useful purpose.

Yet evaluation of Chamberlain will always be based on his policy toward Nazi Germany, his policy of appeasement, his initial trust of Hitler, and above all to the Munich Agreement of September 30, 1938.  This Agreement, ceding the German speaking Sudetenland region of Czechoslovakia to Germany, was declared by Chamberlain as “peace with honor.”

Waving a sheet of paper, Chamberlain held that Hitler had agreed the two countries would never go to war, and that he had achieved “peace for our time.”

Chamberlain was a guilty person in his misunderstanding of Hitler but not a traitor, villain or evil. He was wrong about Hitler, but he tried in his own way to save the world from the devastating struggle. He did not anticipate the German invasion of Poland on September 1,1939, but declared war on Germany on September 3, 1939.

After  the Allied forces had failed to prevent the German invasion of Norway on April  9, 1940, Chamberlain was criticized by members of all political parties, and resigned as prime minister on May 10, 1940.

In his speech on the declaration of war on September 3, 1939, Chamberlain declared, “it  is the evil things that we shall be fighting against, brute force, bad faith, injustice, oppression, and persecution, and against them I am certain that the right will prevail.”

Real evil was displayed, eighty years ago at the Wannsee Conference, the meeting on January 20, 1942 at the idyllic  lakeside villa outside Berlin which discussed and planned the Final Solution. The portrait of evil is evident in the 15 page Wannsee Protocol drafted at a later date by Adolf Eichmann. The conference was attended by 15 men , representers of most branches of Nazi system, party and state. It is significant to note that they were powerful, highly educated figures, not ordinary or banal. Ten of the 15 had a university degree, 8 had doctorates, and 8 had studied law.

The agencies of the Nazi State were represented by high-ranklng officials from the ministry of justice, the Reich  cabinet, the Reich ministry for the occupied Eastern Territories, and German occupied Soviet Union, Reich ministry for the Occupied Eastern Provinces, the Foreign Office, the ministry of the Interior, the office of Plenipotentiary for the four-year plan, the office of the government of the Governor General, German occupied Poland, and the Nazi Party chancellery.

Representatives of the  Armed forces, Wehrmacht, and the Reich railroads were not present because of previous agreements with them on the transport and murder of Jews prior to the invasion of the USSR on 1941 of civilians  including Soviet Jews. At Wannsee, most if not all of the participants were aware that mass murder of Jews and others had been occurring,

Heydrich reported that  the Reich Marsal Goering had appointed him delegate for the preparation for the Final Solution of the Jewish question in Europe, and declared the conference would discuss how Jews would be appropriately dealt with.

The meeting, which only lasted 90 minutes, did not discuss in detail how this was to be done, nor a specific  plan to implement the Final Solution  nor an open description of the killing program since the basic decision had already been made. There were certain misgivings about some aspects but no-one objected to the basic policy to eliminate the Jews, said to number 11 million, in  Europe. It was Eichmann who provided the incorrect population statistics which overstated the number of Jews in Europe.

Adolf Eichmann, has become a well known subject of controversy because of his arrest and trial by Israel, and the controversy over the book, Eichmann in Jerusalem; a report on the Banality of Evil  by Hannah Arendt who attended the trial in Jerusalem for only a short time.  Her use of the term “banality,” was and remains unclear and controversial. Most important, Arendt was struck by “the manifest shallowness” in Eichmann. Her view was that his deeds were monstrous  but he was quite ordinary and commonplace, and neither demonic nor monstrous. In controversial conclusion, her surprise was that an apparently commonplace individual was capable of monstrous crimes. Her assertion raises the wider problem of accountability and responsibility, important today, of who is  ultimately responsible, whether an individual following an order by a superior that is illegal is guilty.

Yet, whatever the meaning of “banality,” Arendt  was mistaken in her judgement of Eichmann,  There was no script of the discussion at Wannsee, and the language was euphemistic, attempting to disguise the evil intentions of the participants.

In conversations recorded in Argentina in 1957, Eichmann admitted he was a cautious bureaucrat, but, more important, also called himself a “fanatical warrior, fighting for the freedom of my blood which is my birthright.” He refused to acknowledge he had done anything wrong. Indeed, he expressed unhappiness he was forced remain silent in the years 1945 to 1962.

Evil was manifest. Eichmann was the key figure in arranging the deportation of millions of Jews including 440,000 Hungarians, to death camps.  He showed no remorse or guilt for his role.  He was a monster of evil, the mastermind of unparalleled horrors, not a faceless functionary. Chamberlain was guilty only of mistakes in judgment.