Hamas Seeks The Elimination of the State of Israel 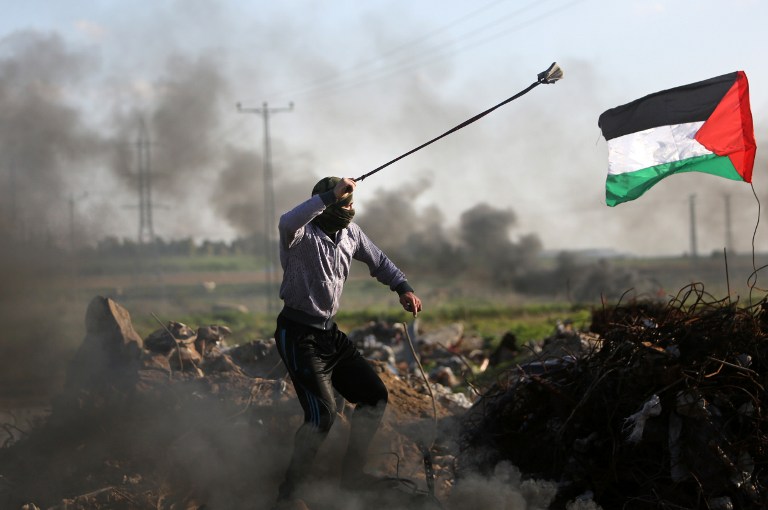 On March 30, 2018 the Hamas group called on Gazans to demonstrate in a “March to Return.” Palestinian protestors, variously estimated but probably 30,000, massed along the Israeli border, burning tires, throwing stones and fire bombs at Israeli soldiers. Those soldiers respond with live fire and riot dispersal measures, including tanks, and earth movers to make temporary barriers. Hamas had sent women and children  to the security fence. In the fight 16 Palestinians died and more than 1,000 were injured.

Almost all media accounts of the confrontation missed the point of the incident. The real issues were the land of Palestine and the existence of the State of Israel. The organizing group Hamas, regarded as a terrorist organization not only by Israel but also by the UK, the EU, the U.S. in October 1997, and other countries, has proclaimed the reality on many occasions. On the day of the March, the present Hamas leader Ismail Haniyeh said “our people will not give up Jerusalem or Palestine.” This March of Return is the  beginning of the return to all of Palestine: “our people wil not agree to keep the right of return only as a slogan.”

Hamas founded in 1987 is the Arab synonym for Islamic Resistance Movement.

Its 1988 Charter is stark and foreboding -.Jews have usurped Palestine. They also control the media of the world, they were behind the French Revolution and secret societies, and they control imperialist countries. Palestintine is an Islamic Waqf consecrated for Moslem generations until Judgement Day. Hamas strives to raise the banner of Allah over every inch of Palestine.

The call is to return to “historic Palestine,” in effect the destruction of the State of Israel, and will be accomplished by all means including violence. Even if it is true that Israel pulled all its troops and settlers out of Gaza in 2005, Hamas argues it still controls air space, and perimeters and the waters around Gaza. Hamas fought three major wars against Israel, in December 2008, November 2012, and the 50 day Operation Protective Edge in July 2014.

Hamas for some years was under pressure by more moderate Arabs to update and modify the 1988 Charter.  Seeking to end criticism over the language in some of the articles in the Charter that are explicitly antisemitic, Hamas did alter one position; now its conflict is with the Zionist occupation, the “Zionist project,” not with Jews.

A document issued in May 2017 did appear to accept the idea of a Palestinian state within the lines (there were and still are no borders) before 1967: that would include the West Bank, Gaza, and all of Jerusalem. According to Khaled Meshaal, then head of Hamas, this would be a stage toward liberation of all of Palestine. This means the land from the River Jordan in the east to the Mediterranean sea in the west.

It remains clear that Hamas does not recognize Israel’s right to exist anywhere in Palestine. It is equally clear for Hamas, in a grandiose statement, that resistance to occupation by all means and methods is a legitimate right guaranteed by divine laws, customs, and international laws. The 2018 March was symbolically organized on March 30, the annual day commemorating Land Day in 1976 when a march and demonstrations were organized in response to the Israeli plan to expropriate some land in Galilee to build new settlements. In the fighting six Arabs were killed and a hundred injured.

The 2018 March took place in the context of two other factors. One is the poor economic situation in the Gaza Strip. The other is the continuing struggle between Hamas and the Palestinian Authority, run by Fatah, which has been going on for a decade. The PA in 2017 cut salaries of employees in the public sector and in the professions. Yet the basic problem remains, the relentless and continuing violence against Israel. More of that can be expected on May 15, Nakba (catastrophe) day.

That day is concerned with the refugees and the right to return. But again, the reality must be stated on this whole issue. The Palestinian refugee problem began as a result of the invasion of the State of Israel on May 15, 1948, one day after the creation of the State, by five Arab armies. Israel survived, the Nakba for Palestinans, but acute differences persist on who was responsible for Arabs leaving their homes. Was it Israeli strategy or Arab incompetence or ineptness? Some well known authories suggest the latter. General Sir John Bagot Glubb, British commander of the Jordan Arab Legion, said the Arab villages were frequently abandoned even before they were affected by the progress of the war. Others suggest that the Arab Higher Committee gave orders for people to leave. There is no consensus on the matter, but the reality existed that an estimated 700,000 Palestinians left their homes,  and  their number increased as a result of the Six Day 1967 war.

According to a UN organization, Palestinian refugees are defined as persons whose normal place of residence was Palestine during the period June 1, 1946 to May 15, 1948, and who lost both home and means of livelihood as a result of the 1948 conflict. By that very definition, few Palestinian refugees remain alive: some  estimates suggest between 20-30,000. All the other supposed refugees are decendants to the third or even fourth generation of original refugees, and even adopted children, and only by tortuous logic can be construed as refugees.

It is the UNRWA that persists in regarding those descendants, which it calculates as 5 million, as refugees elibible for its services. About a third live in 58 recognized refugee camps in Middle East countries as well as in the West Bank and Gaza. UNRWA does not own or administer the camps but it does provide services, maintaining schools, and health centers.

Three things are appropriate. It is time for Arab countries to absorb the alleged refugees and give them citizenship. Otherwise, the March of Return means the elimination of the State of Isrsael. Secondly, Israel is already aware that many of its Arab citizens raise Palesintian flags at moments of protests. Thirdly, the U.S, which gives $20 million to Palestinian schools, is aware that these schools teach the desirability of jihad and martydom, and encorage violence against Israel. Perversly, at least 24 schools are named after Palestinian terrorists, and pictures of martyrs are posted on school walls. President  Donald Trump should make this known when he meets PA President Mahmoud Abbas in the near future.

PrevBad Advice From Pope Francis, Who Tells Us Not To Fear
Jewish Leaders and Rising AntisemitismNext