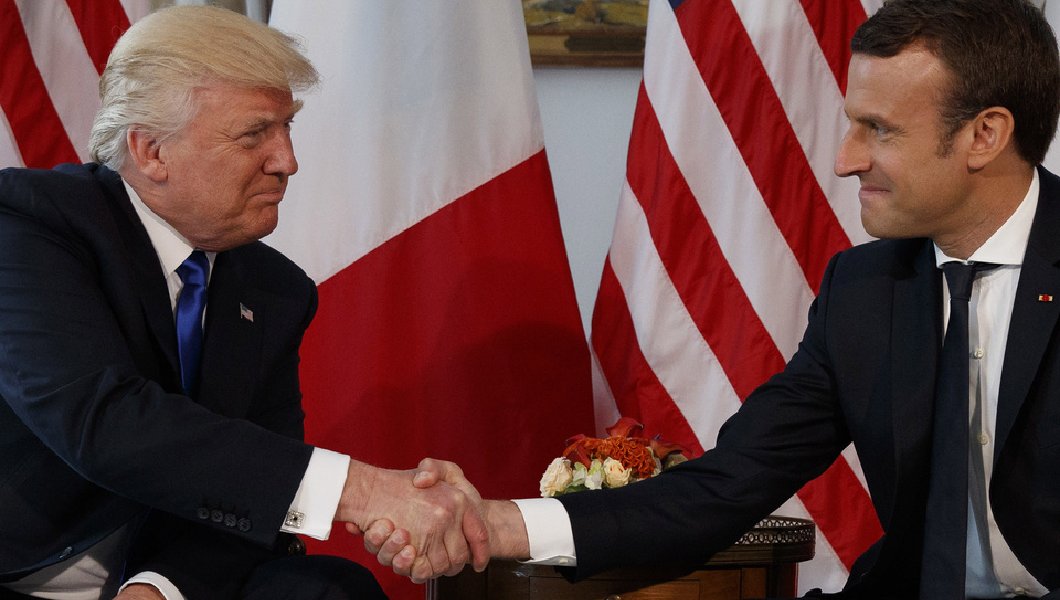 According to Casablanca, a kiss is just a kiss, a sigh is just a sigh, but is a handshake just a handshake? Or is there a correlation between a handshake and character? Does a handshake tell you anything about the personality, political attitude, or feelings of the participant? A handshake may not be a weapon but is it a declaration of policy?

In recent years some handshakes have been significant signals of sensibilities. The one in September 1993 between Yitzhak Rabin and PLO leader Yasser Arafat was marked by discomfort on the part of the then Israeli Prime Minister, as was that on October 14, 1997 in Belfast between Gerry Adams, president of Sinn Fein, and British Prime Minister Tony Blair. One the other hand, that on June 27, 2012 also in Belfast between Martin McGuiness, former commander of the IRA, and Queen Elizabeth I, both symbolically wearing green, illustrated a change in attitudes, a more moderate policy of the part of the Irish Republican movement .

Since the election of Donald Trump to the U.S. Presidency, the U.S. media has created a virtual cottage industry examining his handshakes with foreign leaders, and any meaning to be found in them. The most scrutinized and notable of them is that on May 25, 2017 at the NATO summit meeting with Emmanuel Macron, the newly elected President of France.

The pictures of the event with the US and French flags in the background are revealing. While the two leaders are grimacing at each other, the handshake was unusually long with each demonstrating strength to the degree that white knuckles were shown by both. Whether Macron actually intended to crush Trump’s hand physically is not clear, but evidently it was a show of power. Indeed Macron stated it was not innocent, it was deliberate, intentional, a “moment of truth.”

Macron, new on the international scene, is ambitious, showing in his remarks and physically posture he is in control, eager for France to be strong economically and to play an increasing role internationally. Already, he is preparing to cut government spending in order to meet requirements of European Union budget deficit limits and restore French financial creditability. It is more than likely that he views himself in the image of Charles de Gaulle, saving France from petty partisan quarrels and glorifying the role of a strong and independent France.

As a result of Trump’s rejection on June 1, 2017of the Paris Climate Change Agreement on carbon emissions  he has been criticized by French leaders. Macron teased him by transforming Trump’s familiar battle cry into “Make the planet great again.” Immediately, Macron in English made two offers of refuge to American scientists who were disappointed by Trump’s views on climate and who he held would find a second homeland in France.

Following Trump’s remark that his friend named “Jim,” refuses to visit the French capital because “Paris is no longer Paris,” the Mayor of Paris, Anne Hidalgo showed a video of Mickey and Minnie Mouse at the Eiffel Tower celebrating Paris that was “doing well and was a resilient city.”

Trump will now see the city , having accepted the invitation from Macron to visit Paris on July 14, take part in the traditional Bastille Day parade, to witness fireworks at the Eiffel Tower, and to commemorate the 100th anniversary of American entry into World War I. It is meaningful that US soldiers, though not under the leadership of their Commander in Chief, will take part with French military in the parade. It is even more memorable that the entrance of those U.S. troops in 1917 was a turning point in U.S. relations with Europe, a rejection of isolationism and the policy of no foreign entanglements, and the beginning of U.S. efforts at hegemonic stability in Europe.

Foreign dignitaries have been invited on Bastille Day in the past. In retrospect, the most unwise was in 2008 when President Nicholas Sarkozy had Syrian President Bashar al-Assad. It is not necessarily the best of times nor the worst of times for President Trump to go to Paris.  But the visit is politically shrewd for both countries. The Trump visit is opportune and provides an opportunity for conciliation between the two sides and  discussion of  meaningful issues, starting with counterterrorism and economic partnership.

It is time to overcome past mistakes or misunderstandings on both sides. It was unwise for Trump to have suggested implicit endorsement of Marine Le Pen, whom he termed “the strongest candidate,” and who was the main opponent of Macron, in the first round of the French presidential election in April 2017, and who had visited Trump Tower in January 2017 though she did not meet Trump at the time. It was equally unwise for Barack Obama, on April 20, 2017, to have spoken on the phone to Macron, a few days before the first round, even if he did not explicitly endorse  Macron.

Macron may find echoes of French history in Trump’s visit. It was Napoleon, a strong ruler with no clear political agenda, who wanted to emphasize law and order internally and to make France great again internationally. Trump is not likely to storm the Bastille, the former royal fortress and prison, as did the revolutionaries on July 4, 1789 to remove the symbol of authority and oppression, but he is like the French Emperor an advocate of law and order.

Trump and Macron share certain values. Macron has already appeared tough, and competent to deal with Russian President Putin and German Chancellor Merkel as well as President Trump. He is prepared, like Trump, to act against terrorists, increasing tough measures including house arrests and property searches without warrants and even preventing protest marches on grounds of security. Like Trump he is using executive orders to get economic changes.

Internationally, Macron has attempted to act as a conciliator in the dispute between  Saudi Arabia  and Qatar , has spoken strongly to Putin regarding both the use of chemical weapons in a future attack by Syria as well as the alleged Russian intervention in the French election, and the lying propaganda of the Russian media.

Macron resembles Trump in some other ways. He will not have a news conference on Bastille Day because his “complex thoughts” are not appropriate. He has, perhaps in jest, spoken of his rule as a “Jupiterian” presidency, echoing the Roman king of gods.

Trump has not yet fully outlined a foreign policy but he is prepared to act, to defend the U.S. and to limit immigration, if unwilling or careful to intervene or participate in quarrels elsewhere, though he is not an isolationist. Macron is aware that the U.S. is no longer willing to be the gendarme of the world though it is prepared to act if US security is threatened.  Paris is better in April, when chestnuts are in blossom, but July is the month for American-French entente.