From the Manchester Evening News, here and here.

Abedi, who plotted the Manchester Arena terror attack alongside his brother, suicide bomber Salman Abedi, has been convicted alongside two other terrorists. Parsons Green Tube bomber Ahmed Hassan, 22, and Muhammed Saeed, 23, who spoke about carrying out a knife attack in London, were also found guilty. The attack took place in Belmarsh’s high security unit on May 11, 2020. 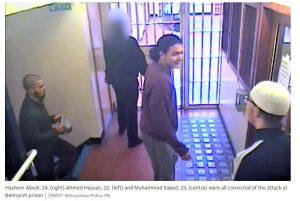 Prison officer Paul Edwards, 57, was hit with a chair and repeatedly punched and kicked by Abedi, Hassan and Saeed. Mr Edwards told jurors he was hit with a chair, repeatedly punched and kicked in the attack. “I feared for my life, and I genuinely thought if I hadn’t fought back I would’ve ended up with at least extreme injuries or dead,” he said.

Abedi was also found guilty of assault by beating of an emergency worker after kicking prison officer Nick Barnett as he came to his colleague’s aid. “It was just like a pack of animals on Mr Edwards,” said Mr Barnett.

Before being sentenced, Abedi, who is currently serving a minimum of 55 years in prison, told a judge the extra three years and 10 months of jail time ‘would not make any difference’. He said: “I don’t think the sentence is going to make any difference. Inshallah, myself and all my brothers will be leaving the prison very soon. The promises of Allah and the Prophet are more truthful than your sentence and your judgment.”

All three prisoners denied assault causing actual bodily harm (ABH) to Mr Edwards but were found guilty at Woolwich Crown Court on Tuesday by a jury after around three and a half hours of deliberations.

The court heard that the attack happened after Mr Abedi and Mr Hassan had both lost prison privileges, including being prevented from using their televisions, games stations and DVD players.  I know that breaking rocks in the hot sun isn’t compatible with modern ideas of penal reform, but in many ways it did have merit in keeping prisoners out of mischief.

PrevThe Abraham Accords are Working
Russia falls back. Towards what?Next