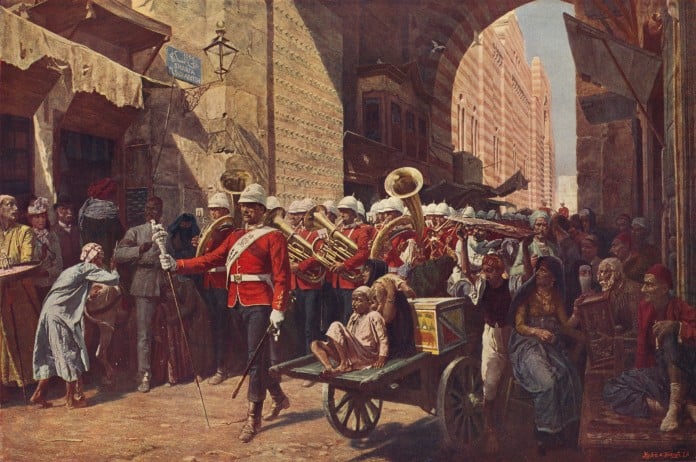 Now is the winter of Britain’s discontent, its broad arms hung up for monuments which are being challenged because of global protests against racism and colonialism.

“Off with his head” said the Queen of Hearts when she was in one of her furious passions. Fortunately, she was countered by the UK government which does not support the removal of statues or similar objects. However, some people are hard of hearing and would like heads to roll, starting with examination of their suitability. The decision on which heads should roll depends on the answer to the question, should we use accepted moral standards of today as yardsticks to judge past behavior, or should we adopt moral relativism in holding that values of the past were appropriate for their time and should not be censured.

The answer differs with each case being examined. Few would condemn or refuse to visit the Pyramids, Parthenon, or Forum in Rome because they were built by slave labor. Many others would see Jefferson Davis’ A Short History of the Confederate States of America, with its arguments that the Civil War was a “war of the part of the Government of the U.S. of aggression and usurpation, and on the part of the South for the defense of an inherent and unalienable right,” as 19th century Fake News.

As a result of recent protest movements concerned with issues of equality and justice, many countries have become perplexed by the dilemma of what to do about statues and monuments honoring individuals, many of them prominent, who have been accused of holding racist views or supporting or benefiting from slavery. The debate is whether to remove or deface statues to draw attention to alleged past atrocities or to let them stand and palliate involvement in those atrocities.

In Britain, popular protests, part hooliganism, have led to heads being rolled or questioned.  The most notable have been slave owners or colonialists, Cecil Rhodes at Oxford, Edward Colston, merchant, politician, slave owner, dumped in the harbor in Bristol, Robert Milligan, owner of sugar plantations in Jamaica, removed from the West India docks in London, Lord Holland in London, and Henry Dundas in Edinburgh.

However, what is disconcerting and intellectually perplexing is the increasing participation of a number of British official bodies in activities that are remote from their supposed official function. Instead, in the light of global protests against racism, they have begun examining their history and the existence and extent of   racism and colonialism in that history. The record of some of them, the British Museum, the British Library, the National Trust, the National Maritime Museum in Greenwich, the Geoffrye Museum, can be here briefly examined.

The latest examination is taking place at the prestigious British Library in London, the national library of the UK, the largest library in the world by the number of items catalogued, and which receives copies of all books produced in the UK. Estimates are that the Library has more than two million items. Though it is not a governmental organization and has no connection to political activity, the Library, BL, is not uninfluenced by current political concerns and has given itself a new function, documenting connections in its holdings to slavery and colonialism. It has compiled a dossier of 300 individuals and institution who may have benefited from colonialism or slavery.

For some time the BL has been reviewing its manuscripts of Sir Hans Sloane, the 18th century physician and philanthropist who collected objects from around the world. Already, the British Museum, which he founded, removed his bust from a pedestal and added the label “slave owner,” to his work. Sloane had collected 71.000 artifacts, largely funded from his wife’s sugar plantation in Jamaica which used slave labor. Sloane’s bust was placed in a cabinet explaining his work in the “context of the British empire.”.

Some of the items included in the British Library’s research for the dossier on links to slavery have caused surprise, if not derision. The most recent addition to the dossier is Ted Hughes, the poet, because of the actions of an ancestor more than 300 years ago, a gentleman named Nicholas Ferrar, born in 1592. His family was “deeply involved” with the London Virginia Company, a joint stock company created by King James I to establish colonial settlements in North America.

This particular enterprise by the BL is unlikely to be successful and is absurd for a number of reasons. Ted Hughes is honored as a major 20th century poet, Poet Laureate in 1984, given the Order of Merit just before he died. He is not altogether an amiable figure since he has, among other matters, been blamed of cruelty towards his wife Sylvia Plath, also a poet, and accused of responsibility for her suicide at age 30. Yet it is absurd to think of any connection by him with slavery. Hughes was born poor in 1930 in a small village, Mytholmroyd, in West Yorkshire, and went to Cambridge on a scholarship.

More relevant for research by the BL are three factors: One is that the London Virginia Company lasted only a few years,1606-1624, after which the area of Virginia became a royal colony. The second is that Nicholas Ferrar, a businessman, lost most of his fortune in the company. The third factor is that Ferrar was also an Anglican clergyman and deacon and scholar who was a friend of the metaphysical poet George Herbert who on his deathbed gave his poems to Ferrar. He retired to the village of Little Giddings in Huntingdonshire where he was involved with a spiritual community following High Anglican practice, and where he died aged 45. He is only remembered because of the fact that T. S. Eliot named Little Giddings as the last of his Four Quartets. (“Midwinter spring is its own season.”)

The British Library is also researching other likely suspects, including Lord Byron, Oscar Wilde, and George Orwell, its own version of Fake News. Byron, who died fighting for Greek independence against the colonialist Ottoman Empire, had many real problems, but this investigation by the BL rests on the fact that his great grandfather owned an estate in Granada, and he had an uncle, by marriage, who owned a plantation in St. Kitts.

George Orwell (Eric Blair) was born as he said lower middle class in India, to an agent in the Indian civil service, and worked in the Indian Imperial Police and in Burma, before becoming one of Britain’s great writers. But apparently, his career is not the reason for the BL’s interest. The reason seems to be that his great grandfather  was a wealthy slave owner in Jamaica.

Oscar Wilde who put “his genius in his life” appears because of his uncle’s interest in the slave trade.

Similar activity on its own background is being undertaken by the National Trust, the body set up to preserve historical places, places of great beauty, and national treasures. Asserting that the population of the UK does not wholly understand their country’s history with the slave trade,  the Trust is now  reviewing the links between the properties and the British empire and slavery. In September 2020 it published a 115-page report suggesting that of its 300 properties, 93 have been linked to “controversial practices” of the British Empire. Some of the  properties in question are Chartwell of Winston Churchill, presumably because of his alleged responsibility for the Bengal Famine of 1943, the Powis Estate of Robert Clive of India, blamed for Bengal Famine in 1770  that killed millions, the Bateman Mansion of Rudyard Kipling because of his promotion of empire, and the properties of William Wordsworth, apparently because his brother worked for the East India Company, and of Samuel Taylor Coleridge who had links to his nephew who lived in Barbados and worked with those running estates worked by slaves.

A smaller body, the Geffrye Museum, the Museum of the Home, containing specimens of home life from 1600 to the present, has issued a statement that it has a responsibility to act against injustice and acknowledge the legacy of colonialism and slavery. Among other matters, it is considering the removal of the statue of Sir Robert Geffrye, merchant, Lord Mayor of London in the 17th century, who was historically connected with the Museum by funding the almshouses on which the Museum is housed, but whose wealth was partly derived from trading slaves and involvement with the East India Company.

The National Maritime Museum is reviewing the records of some naval suspects. Amomg them are Captain James Cook, Sir Francis Drake, Sir William Sidney Smith, James de Soumarez, Admiral Edward Pellew, and above all Admiral Lord Horatio Nelson. He maybe Britain’s greatest seafaring hero, the victor of battles of the Nile in 1798, Copenhagen in 1801, and Trafalgar in 1815, but Nelson wrote a private letter opposing the campaign of William Wilberforce and his “damnable and curse doctrine” for abolition of the slave trade. He protected the colony of Jamaica, and appreciated the value of West Indian possessions.

One can understand the ambition of all these institutions to eliminate legacies of racism and colonialism and to create a diverse cultural society, but their activities, to too great a degree, are not germane to their intention and border on the absurd. By investigating prominent individuals unrelated to any political ideology those activities are seemingly based on an adage from Hollywood, “Don’t ask for the moon, we have the stars.”