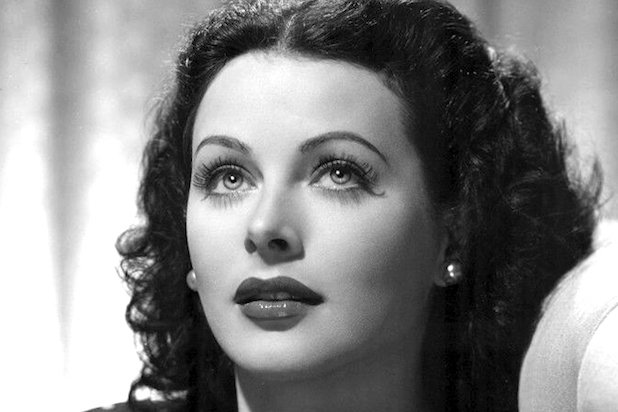 That face, that face, that wonderful face. It shines, it glows, all over the place. Who would have thought that this face was the contenance of a Hollywood siren who was also a brilliant scientist whose invention helped pave the way for present day Wifi, GPS, and Bluetooth?

We know there is no official competition or Oscar for the title of the most beautiful woman in the world, and especially one who would shine anywhere. If the search was confined to Hollywood actresses in the mid 1900s, the Golden Age, the likely winner would be Hedy Lamarr, a close winner over other beauties, Elizabeth Taylor and Rita Hayworth.

Lamarr, born Jewish as Hedwig Kiesler in Vienna in November 1913, the daughter of a bank director and a pianist, grew up in the Jewish quarter of Vienna. She began her acting career as a teenager, aged 17, and gained notoriety for her role in the controversial Czech film Ecstasy in 1933 with its sensual passages. In one of them she appeared riding naked on a horse, and in another she simulated female orgasm. Almost certainly she was the first non-porn actress to do this on screen. The film was attacked by Pope Pius XI.

After a brief unhappy marriage with Fritz Mandl, a wealthy Austrian munitions manufacturer who sold arms to Nazi Germany, the young Kiesler escaped from Vienna, disguised as a maid and went to Paris, London, and then on the same ship as Louis B. Mayer, head of M.G.M., to New York and Hollywood where he signed her to a long term contract as Hedy Lamarr. In spite of the unhappy marriage she did however acquire from Mandl some understanding of military technology.

Few would consider Hedy a great actress with exceptional scope but her beauty led to roles in 37 films with Hollywood’s galaxy of leading men, starting in 1938 with Charles Boyer in Algiers, and then with Robert Taylor, Clark Gable, Spencer Tracy, and Victor Mature among others. Interestingly, she was the first choice for the lead in Casablanca, but the role went to Ingrid Bergman.

On November 15, a documentary film, Bombshell: the Hedy Lamarr Story, produced by Susan Saradon is opening in London’s Jewish Film Festival, and in Tribeca in New York. It brings to light the little known fact that the film star, mostly known for off screen romances and six marriages in her colorful life, was more than just a pretty face. The film in itself is a delightful shift from the ongoing distasteful revelations or allegations of sexual abuse in Tinsel Town.

Perhaps disarmingly, Lamarr herself complained about Hollywood’s obsession with appearances, and mentioned her face was her “misfortine” and a “mask I cannot remove.” Brains she insisted were more important than looks. In an earlier ghost written autobiography she identified herself not only as an actress but also as a scientist who found inventions easy to do. Among others she introduced a device to help people with limited mobility to get in and out of a bath. She helped the producer Howard Hughes create a kind of wing shape to make his planes go faster.

Lamarr deserves a place in the American story because of her invention, in partnership, of a device which can be regarded as an important key to present day wireless communication. Hedy partnered in this research with George Antheil, born in Trenton, New Jersey, an avant garde composer, with many film scores, but also a versatile person with other interests including film reporting, author of murder mysteries, and works on military affairs. Before World War II he was a member of the Hollywood Anti-Nazi League, and sponsored an exhibition of art banned by Nazi Germany.

Antheil purported to be an expert in female endocrinology and this brought him in touch with Hedy who was concerned to enhance her upper torso. But their relationship quickly moved from gland treatment to torpedoes.

Hedy had realized the signifiance of radio controlled torpedos that could damage or sink enemy ships. She also realized these torpedos could be easily detected and jammed, thus causing the torpedo to go off course. She had some knowledge of these matters from her first husband, Friedrich or Fritz Mandl, a munitions manufacturer, and she devised the idea of “frequency hopping.” This meant using a piano roll to change randomly the signal sent to the torpedo with a range of 88 frequencies (the keys on a piano). The code was held by both the controlling ship and the torpedo, thus encrypting the signal because the enemy could not jam the constant changes in radio signals in all 88 frequencies. Lamarr and Antheil worked out controlling the frequency hopping in a player-piano mechanism.

The pair were granted a patent for developing the system on August 11, 1942. However, the project was not immediately adopted by the U.S. Navy. Not until 1962 was the Lamarr idea used by U.S. military ships during the Cuban blockade crisis. And not until 1997 was the contribution of Hedy officially recognized when the Electronic Frontier Foundation gave her an award. The electronic business adopted her device, and the U.S. Navy has used her invention to help transmit the underwater positions of enemy submarines.

It is now clear that Hedy Lamarr should be honored as a pioneer of wireless communication, as a heroine who aimed to combat Nazi Germany and prevent classified messages from being intercepted by enemy personnel. Her frequency hopping idea overlaps with spectrum communication technology and Wifi network connections, and cellphones, cordless and wireless telephones. Her work is an early form of spread spectrum techniques in which a signal generated in a particular bandwidth is spread over a wide frequency range. Her mechanism to synchronize changes between 88 frequencies was ahead of the efforts of Nazi engineers working on similar activity.

Every youngster today takes advantage of Hedy’s contribution to innovative technology and their electronic devices and e-phones. They may be unfamiliar with her performances in the films of the Golden Age of Hollywood, but they can now honor her as a pioneer of wireless communications. They can appreciate that the most beautiful girl in the world can shine anywhere.