Homage to a French Literary Giant of Moderate Conservatism 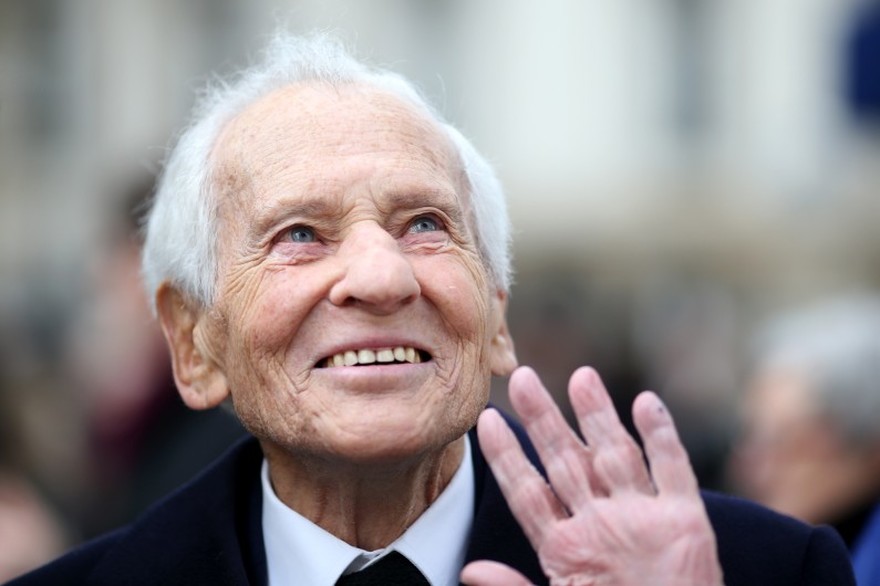 The Chinese have a character for “double happiness.” The French would benefit from a similar character of “double sadness” with the events of December 2017 when two giants of French culture, dissimilar in every way, died on successive days. This is not the first time that two equally dissimilar French icons, Edith Piaf and Jean Cocteau died on successive days in 1963. However, in December 2017, two striking figures died and were honored on successive days, Johnny Hallyday the champion of French rock aged 74, by an elaborate tribute at the Madeleine Church in Paris, and the writer and philosopher Jean d’Ormesson, embodiment of the French classical tradition, aged 92, at a less elaborate function at the Cathedral of the Invalides. Curiously though both men were national treasures , if not as symbolic as the Eiffel Tower or Mont-Saint-Michel, in their own country France, they were  essentially unknown abroad.

In a sense the two men illustrated complementary aspects of French civilization. Both loved life and both were seducers in their different ways. Johnny was a living legend whose music lives on. Jean was a prolific writer and latterly television personality, a graceful charmer with a playful spirit who loved life and communicated this. For Johnny, who appealed to emotion, music, beginning with rock, was his religion. For Jean language and literature was his rock of reason.

France is a country that admires its intellectuals and writers. Jean d’Ormesson, born in 1925 of an aristocratic and diplomatic family who died in Paris at age 92 on December 5, 2017, was the incarnation of French culture, defender of the French language, a charmer. He held right wing political views but was not dogmatic and was admired by the left, as his friendships with political opponents such as Francois Mitterand and Nicolas Sarkozy, to whom he was close, showed. He was Catholic but more agnostic than believer.

Jean in his writings and commentaries combined elegance with depth, humor with learning. At Jean’s funeral service, President Emmanuel Macron, who put a simple pencil on the tomb as Jean wished, eloquently pointed out some of his complexities. If he was an egotist he was also modest and passionate about others. If he had shadows and racks, he was a master of clarity.

Jean was a prominent figure in the French literary world, publishing 40 books, novels and plays, many of them best sellers. He was general manager of Le Figaro for a few years, and for many other years a news commentator, and even in his last years a broadcaster and part time actor on television. He was never as influential a commentator as Raymond Aron who was more biting and penetrating, and never supported large causes or ideologies, rather addressing more specific issues from a conservative point of view. His prominance was recognized by the publishers of Pleiade which publishes the complete works of an author, an action which is considered to be a major sign of recognition of that author’s significance.

Jean was officially honored, and made an Immortal, appointed in 1973 at age 48 to the Academie francaise, still a body of undeniable prestige, one representative of the French esprit. At his death, he was the Dean of the Academie, the longest serving member of it. In 1980 he sponsored Marguerite Yourcenar, whom he called one of the greatest living writers, as a member. She was the first woman to be elected to the AF. So far only 8 of the 729 members have been women. Jean in 2009 was also appointed to another high honor, Grand Officer, Grand Cross, of the Legion of Honor by President Francois Hollande.

Jean may have been an Immortal but he was a constant presence with his charm and wit, which he exhibited on TV screens, including an acting performance with Charlotte Rampling. He was a prince of letters who never took himself too seriously. His comments on politics and on language typifies classical French moderate conservatism and humane politics.

Jean can be considered a modernist, conscious that the world was changing. Moreover, though it was always changing, it was now changing at a faster pace, and in that changing world, the triumph of science must be reconciled with humanism.

He illustrated that change in at least three ways. The French language that he loved had become less important; it was hard to challenge English as the dominant language in the world. Similarly, Europe was no longer the center of world affairs, nor was France the first country in Europe that had become less important, though it was wrong to talk about decline all the time.

As a result of the weakness of European countries, populism had advanced in some of them. He insisted culture goes together with a flourishing economy and military power. Yet, though Africa was advancing, Europe must be praised and safeguarded; it had succeeded in forming a single currency and preventing war among its members.

Jean was concerned about the future of democracy. Europe must now be vigilant, specially concerned, against populism, and its manifestations with Brexit, elections in The Netherlands, in the U.S. with Donald Trump, but above all with his own country. Jean forecast accurately that Marine Le Pen would get 25-30% of the vote in the presidential election but would not win the election. He was fearful she might win in 2022, and posed a cultural as well as a political threat, especially a threat to freedom of the press.

Some of d’Ormesson’s assertations are debatable. He thought that the French people have changed. Once they were happy and carefree; now quoting the jocular Jean Cocteau, they had become “like Italians in a bad mood.”   The country was in bad shape. France is moving politically to the right, and the Communist and Socialist parties no longer seem to exit in France. He was critical of the five years of the Hollande presidency that had been disastrous. The danger of terroism remains and the problem of migrants is acute.

Nevertheless, writers are still a privileged group in France, and have a certain respected voice in society, even if the myth of the great influential writer, like Victor Hugo, or Francois Mauriac, or Andre Gide is no longer applicable to the present.

Jean did participate in the last year of his life in an interesting controversy about language and indeed about society.The present administration under President Macron is urging a gender neutral version of the French language that the AF including Jean thought poses a danger to the purity of French. The issue at hand is whether the language should be gender-neutral. Historically, the masculine takes prededence over the feminine. A group of women only is referred to in feminine way, but if it includes even only one man, the entire group wil be referred to as masculine. Propoents of change call for gender exclusiveness; opponents argue this would be an “aberation” that puts France in “mortal danger.”

The controversy continues, and purists and others will disagree, but all should agree that the prolific writings of Jean d’ Ormesson should be more widely translated. It would be particularly valuable to have the voice of moderate and sensible conservatism in English in the United States at the present time.