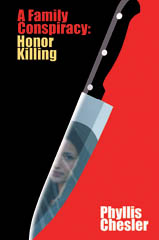 Phyllis Chesler pioneered the study of violence against women in the late 1960s, concentrating on women living in North America and Europe. By 2003, she was writing about honor killings, based on newspaper accounts, Internet sources, interviews, and memoirs. She then embarked on a series of equally pioneering, meticulously researched, academic studies of honor killings in the West, but also in the Middle East and South Asia. These studies and over 90 articles on the same subject are collected for the first time in A Family Conspiracy: Honor Killing.

Chesler carefully distinguishes honor killings from “plain and psychopathic homicides, serial killings, crimes of passion, revenge killings, and domestic violence.” An honor killing is the murder of girls and women by their families because of supposedly disgraceful acts perceived to have brought public shame. Honor killings are a family collaboration and even considered by their perpetrators to be legally justifiable acts of self-defense, because the murdered girls’ dishonor is regarded as an aggressive act against their families. It demands a response.

In her second of four in-depth studies first published in The Middle East Quarterly, Chesler looked at 172 incidents and 230 honor-killing victims. She gathered most of her information from English-language media around the world. “There were 100 victims murdered for honor in the West, including 33 in North America and 67 in Europe,” Chesler found. “There were 130 additional victims in the Muslim world. Most of the perpetrators were Muslims, as were their victims, and most of the victims were women.” Indeed, while Sikhs and Hindus do commit such murders, the honor killings in her study, both those in the West and in the rest of the world, are mainly Muslim-on-Muslim crimes.

It is a measure of her intellectual integrity that Chesler goes where the data lead. Thus, her conclusion, based on the empirical evidence, is that “the origin of honor killings probably resides in shame-and-honor tribalism, not necessarily in a particular religion.” And she holds each religion—Islam, Hinduism, and Sikhism—responsible for failing to abolish, or trying to abolish, honor killing or femicide.

But can Islam itself really have nothing to do with honor killings, even though Muslims have perpetuated the majority of such murders in the West? Yes, honor killings have also been found in various societies in the Balkans, the southern Mediterranean (Sicily, for example), and in India, but could these cultures not have learned from Islam, since they were all under Islamic domination for centuries? Further, how does one disentangle the supposed tribal components of honor killing from the religious ones?

Surely, for example, Pakistani culture, saturated with Islam—a religion that undoubtedly treats women as inferior—could only develop a deeply misogynistic society that makes honor killing possible. Religious authorities do not condemn honor killings in Pakistan, a fact that makes hope of abolition remote. The attitudes that make honor-killing possible are derived directly from Islamic teachings and are further reinforced by them. Muslim nations make similar arguments about cliterectomy and other anti-modern practices.

Chesler has put her scholarship to good use by submitting “affidavits about honor killing in court cases where girls or women, in flight from being honor killed, were seeking political asylum or emancipation from their families.” She has rendered a great service in presenting the fruit of her sober research, which should be the starting point of any attempts to deal with this barbaric custom, whether Islamic or merely tribal. Chesler has contributed, and not for the first time, to the amelioration of the suffering of countless women.