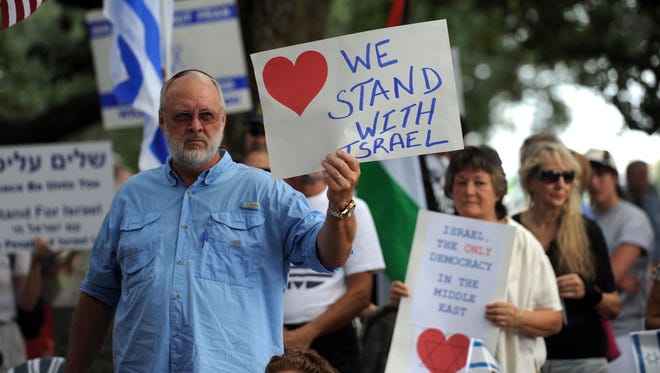 In August 2014 during the final days of Operation Protective Edge in the Third Israel-Hamas War, I led the organization of local Jewish Federation Rally here in Pensacola along with local radio co-host Mike Bates featuring local and regional rabbis and CUFI Pastors, then State Representative Mike Hill that drew a large crowd that was “infiltrated” by local Palestinian supporters exercising their First Amendment rights.

We had phone hookups with national Jewish federation leaders and a call in with my chaver in Israel, Dan Diker of the Jerusalem Center for Public Affairs giving us an update on what was happening. We got terrific media coverage from both print and tv news.

During the proceedings, I was interviewed by a Pensacola News Journal reporter. Note the prescient remarks by Mike Hill, Mike Bates and this writer relative to what is going on during the Fourth War with Hamas, amid barrages of indiscriminate rocket firing from Gaza covering central and southern Israel, “Star Wars “-like Iron Dome interceptions, sectarian violence in joint Jewish Arab towns, the Temple Mount and the disputed territories of Judea and Samaria.

Florida House Rep. Mike Hill brought the crowd  to their feet when he announced a resolution to be voted on by the state House next week in support of Israel.

“What is being done to Israel is evil,” Hill said. “Israel are our allies, and they need our support. Let’s show the nation that Florida is leading the way in support for Israel.”

Bates’ co-host and fellow speaker at Sunday’s rally, Jerry Gordon, said many Americans incorrectly perceive Israel to be the “villains” in the current fighting because national media don’t report the historical context of the conflict. He said he hopes a resolution to the fighting can be found soon but that certain conditions would have to be met.

“The only breakthrough would come if they negotiated a deal to demilitarize Gaza,” he said. “I think the chances of that are really low, unfortunately. One never knows what may happen, but certainly there is a lot of regional sentiment for that.”

What is the French expression : “Plus ça Change, Plus C’est La Même Chose “.  The more things change, the more they remain the same…. only worse, now.

Perhaps Pensacolians, who are allies of the sovereign Jewish nation of Israel should rise to the occasion again to bring the EMET. The truth of what is happening now with media coverage and protests around the US and the world promoting the victimhood of Palestinians caused by the Islamist extremists of Hamas seeking death to all Jews, whether in Israel or the world diaspora.