If Geert Wilders’ wins today could there be a political crisis in The Netherlands? 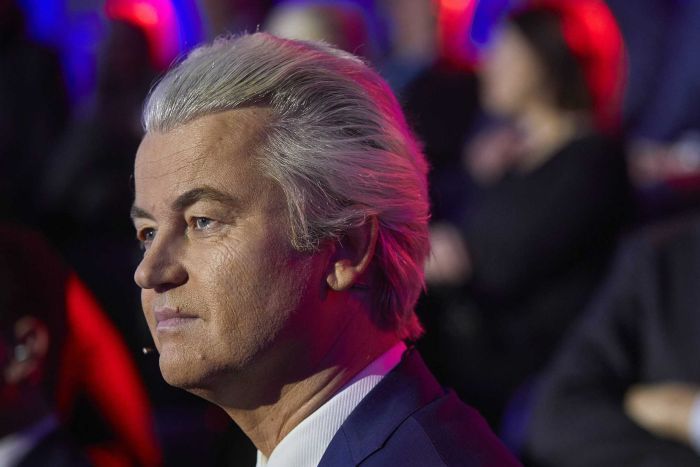 On Israel News Talk Radio’s -Beyond the Fringe  program  this  week  listen here , co- host Rod Bryant and I devoted a segment to the fracas between The Netherlands and Turkey this past weekend in the run up to today’s general election in what could be a crucial test of rising nationalist populism in Europe.

We pointed out to our global and Israeli listeners Wilders’ long held pro Israel stands and heroic opposition to the Islamic Republic in a visit to Tehran that had him ejected as persona non grata. Wilders also espouses the view that Jordan is Palestine.

How the Dutch Turkish faceoff could figure in today’s vote

Current Dutch PM Mark Rutte veered closer to Wilders’ positions with his dramatic actions the weekend prior to the March 15, elections. He denied a visit by the Turkish Foreign Minister preventing him from landing to attend a rally of Dutch Turks in Rotterdam and ejected a Dutch Families Minister to Germany, a move that was protested by Dutch Turks in Rotterdam with a Muslim mayor. The rallies by Turkish ministers of Erodgan’s government in Holland were scheduled to urge the 400,000 Dutch Turks to vote in the April 16th national referendum in Turkey making President a veritable autocrat extending his term by a decade to 26 years. There are 5.5 million Turkish ex pats in EU core countries in France, Germany, Austria and the Netherlands.  All of whom have, with the exception of France have blocked rallies by Turkish officials of the AKP government in Ankara.

Both Rutte and Erdogan demanded apologies and called in their respective ambassadors.

The weekend fracas has boosted polls figures on Monday for both Rutte and Wilders with just a three seat spread between the two parties; the VVD with 27 versus 24 for the PVV. Later polls taken following nationalized televised debates showed the results were even closer.

Dutch opinion polls show terrorism, anti immigration and preserving national values as leading issues.  This race  that culminates today could go either way or result in Wilders being first past the post with enough seats to possibly having King Willem  ask Wilders to form a government in the Hague Parliament, the tweeder kamer.  However that could be a long shot.  Rutte of the VVD and other smaller center parties have said they would never join a PVV led coalition government making the possibility of Wilders being the next Dutch Prime Minister, Dutch political prognosticators in Holland suggest the prospects might slim to none.

The movement by Mark Rutte, leader of the VVD towards nationalist views in the confrontation with Turkish President Erdogan may have shifted un-decided Dutch voters towards the PVV and resurrected Sybrand Buma leader of  the Christian Democrats (CDA) to poll in third position behind Wilders.

Rutte and Buma may have turned more nationalist in the waning days of the campaign. However, they cling to support of Dutch membership in the EU, while Wilders supports NExit which antedated that of the Brexit referendum vote in the UK.

One domestic issue that Wilders has flagged, protection of pension benefits has divided Dutch workers from their union leaders. That was evident in an interview with the union leader in the port Rotterdam. He noted his members would likely vote for Wilders.

It looks like whatever results from final polling results that the wrangling over formation of a ruling coalition from the 28 parties contesting for seats in the Hague parliament, the tweeder kamer, will take a while to sort it out. PM Rutte, as a formality, resigned as government leader on Thursday and informed King Willem setting the stage for today’s general election.

Could there be a political crisis in Holland?

Nevertheless, even if Wilders doesn’t get that opportunity, some observers suggest that by losing he has won because he has led Dutch popular opinion on national issues. A Politico EU article that looked at the prospects of prime contenders in today’s Dutch general elections commented on the masterful role of Geert Wilders staking out parliamentary positions and seizing the news cycle. As one Socialist party figure stated, if Wilders is first past the post “it might create a political crisis.”

None of the leading parties, whether, Mark Rutte’s Freedom and Democracy VVD or resurrected Buma’s Christian Democrats CDA, the latter polling in third position, and other smaller parties may be able to cobble together the requisite 76 votes in the 150 seat Hague Parliament, the tweeder kamer, to form a ruling coalition. That is the daunting task that King Willem will have to address when polling ends tonight.

One comment made in the Politico EU article may be prescient. Whatever the results, Wilders looks like the leader of the opposition. Stay tuned for the outcome of today’s momentous Dutch general election results.

RELATED VIDEO: The day before the Dutch election there were debates. The last of these debates was a debate between the leader of the Dutch Freedom Party Geert Wilders, and the leader of the Christian Union Party. This debate is translated into English.

This article was originally published in Dr. Rich Swier eMagazine

PrevTwitter accounts hacked by ‘Turkish government supporters’ – with anti-Dutch messages
Why Do So Many Muslims Hate Dogs?Next