From Reuters and India Legal

NEW DELHI (Reuters) – India has brought charges of culpable homicide not amounting to murder against the chief of a Muslim seminary for holding a gathering last month that authorities say led to a big jump in coronavirus infections, police said on Thursday.

Police initially filed a case against Muhammad Saad Kandhalvi, the chief of the centre, for violating a ban on big gatherings but had now invoked the law against culpable homicide, a police spokesman said. “Delhi police had filed a first information report earlier against the Tablighi chief, now section 304 has been added,” the officer said, referring to culpable homicide in the penal code, which carries a maximum punishment of a 10-year prison term.

A spokesman for the Tablighi Jamaat group, Mujeeb-ur Rehman, declined to comment saying they had not confirmed reports about the new charges. Kandhalvi who was on the run is now on self quarantine which runs out tomorrow and police are looking forward to take him into custody as it finishes.

The Tablighi is one of the world’s biggest Sunni Muslim proselytising organisations with followers in more than 80 countries, promoting a pure form of Islam. Readers will recall that this group run the Dewsbury Markazi in Savilletown Yorkshire and we responsible for the applications for the West Ham ‘megamosque’ on the land they own in Newham East London.

Authorities said at the beginning of the month that a third of the nearly 3,000 coronavirus cases at that time were either people who attended the Tablighi gathering or those who were later exposed to them. In the coronavirus hot spot of Delhi, 1,080 of its 1,561 cases were linked to the group’s gathering, according to the city government data on Wednesday.

The Tablighi administrators earlier said many of the followers who had visited its offices in a narrow, winding lane in Delhi’s historic Nizamuddin quarter were stranded after the government declared a three-week lockdown, and the centre had to offer them shelter.

The FIR says the Delhi Police contacted the Nizamuddin Markaz on March 21 and reminded them of the government order which prohibited political/religious gathering of more than 50 people. Despite repeated efforts, the event organisers failed to inform the health department about the huge gathering at the Markaz and deliberately disobeyed government orders.

Meanwhile, reports are now emerging that several members of the Tablighi Jamaat who had attended the religious congregation told the Delhi police that they had paid for food and shelter, prior to the commencement of the event. The police are now investigating whether it was the ‘money angle’ that encouraged the organisers to flout government orders and prevent the Jamaatis from leaving the premises of the Markaz. The Delhi Police is now scrutinising the account books to ascertain the amount received by them from the attendees, the Times of India reported. 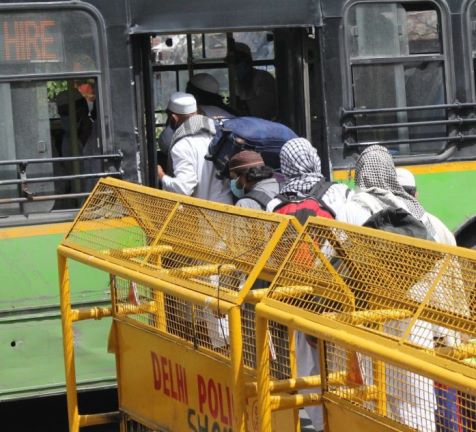 Over 9000 Tablighi Jamaatis were said to have attended the event in Delhi’s Banglewali Masjid by Nizamuddin Markaz. Adding the Jamaatis who have been coming to the Markaz and their contacts, over 25,000 people linked to the religious group have already been quarantined by the government.

PrevThe World Health Organization and Truth
Will Biden Be the Nominee?Next