Interview with Ken Timmerman: And the Rest is History

Ken Timmerman, intrepid investigative journalist discusses his real-life adventures in his memoir “And the Rest is History” in this exclusive NER Iconoclast Interview. 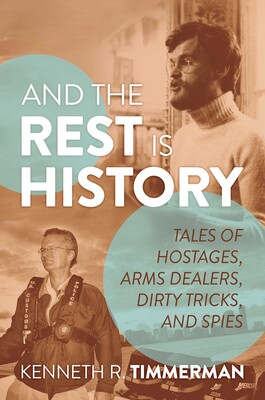 Join us for entertaining discussion with Ken Timmerman on the release of his 12th book of non-fiction, “And the Rest is History: Tales of Hostages, Arms Dealers, Dirty Tricks, and Spies.”  His latest opus chronicles his real-life adventures beginning in 1982 with his salvation spiritually and physically when he is becomes a hostage for 24 days in a Palestinian dungeon in West Beirut. He and two French hostages are rescued by the French just hours before the building in which they were held was totally destroyed in an Israeli air strike.

After his release, he covers the internecine Palestinian wars, the bombing of the US Embassy, the near simultaneous bombings of French Paras and US Marine Barracks by terrorist mastermind Imad Mughniyeh and much more.

He emerges as recognized international investigative journalist working out of Paris covering transfer of defense and dual use technology to rogue regimes in Iraq and elsewhere, which he sold to sold to mainstream publications in the US and Europe.

Later he finds out why the US pulled back from a joint reprisal bombing with the French of Iranian Revolutionary Guards in the Beqaa Valley. And who squelched US participation in the joint air strike? The late Colin Powell, then Colonel and Military Adviser to Weinberger. The US had intercepted instructions from the Iranians to their embassy in Damascus ordering the bombing of the US Marines, but Powell kept that information from the Sec/Def for fear of antagonizing Iran. Mughniyeh was later involved in the training Al Qaeda for the Saudi US barracks in 1996, US Embassy attacks in East Africa, the USS Cole in 200 and 9/11 attacks.

The Prelude to Iran Contra Revealed in shadowy Arms Deal

He chronicles his involvement in a secret US “initiative” toward Iran by a shadowy group of US defense and intelligence rogues in Paris, a prelude to the Iran/Contra hostage for arms deal. It was part of a strategic initiative to wean Iran away from the Soviet embrace during the Reagan administration. His involvement in a deal with Egypt for sale of US F-4’s via Paraguay gets him labelled as an arms dealer by the New York Times.

He becomes an Israeli “spy” in an attempt at rescuing downed Israeli A-4 navigator Ron Arad and two soldiers with a Swiss intelligence hostage negotiator with elements of Hezbollah in Geneva. The effort is backed by legendary Israeli and last Ambassador to Iran Uri Lubrani and then IDF Military Attaché at the Israel Embassy in Paris Colonel Jacques Neriah. Because of a delay in forming a ruling Knesset coalition in the November 1988 elections, an opportunity is lost to rescue Ron Arad from Hezbollah who is transferred to Iran, where he may likely have died.

Timmerman was one of two Western reporters who covered Saddam Hussein’s 1989 arms fairs in Baghdad, where he exposed the illicit sale of US laser targeting technology by the French. He photographed state-of-the-art laser designation pods under Iraqi Mirage jet fighters that were provided by French defense electronics company Thompson CSF in violation of US export controls.

At the invitation of Armscor he is invited to South Africa to become involved with the testing of a long range 155mm howitzer by rogue Canadian ballistic scientist Gerald Bull when he inadvertently uncovers crates marked for transfer to Saddam Hussein regime in Baghdad. Just before the US first Gulf War he was approached by the US Air Force air attaché in Paris seeking information on early warning radar systems that French defense companies had sold to Iraq.

His long relations with the Simon Wiesenthal Center begin with uncovering an international network that was providing dual use technology to produce chemical precursors for nerve gas and bio warfare agents to Libya and Iraq.

Return to US leads to Firing by Holocaust Survivor and Congressman Lantos for Revealing Clinton arms deals with China.

His return to the US after 18 years operating out of Paris is facilitated by his recruitment by Holocaust survivor US Congressman Tom Lantos in 1993 to investigate WMD on the staff of a House foreign affairs subcommittee. That ends when he uncovers the secret information on the Clinton Administration clandestine transfer of defense manufacturing technology to China. It results in his being fired and Time Magazine rejecting his story on the episode. As a result, he makes a political transition from a liberal Democrat to a conservative Republican.

Timmerman ‘s And the Rest is History is the first of three memoirs. The next volume, The Iran House covers his secret work with Uri Lubrani on another series of adventures through his founding leadership of the Foundation for Democracy in Iran aimed at fostering regime change in Iran. The third volume, Raising Olives in Provence, is a more whimsical account of his life in the south of France and a meditation on God’s plan for each one of us.