Far from being dictatorial, the order is profoundly liberating for clients, architects, and public alike. 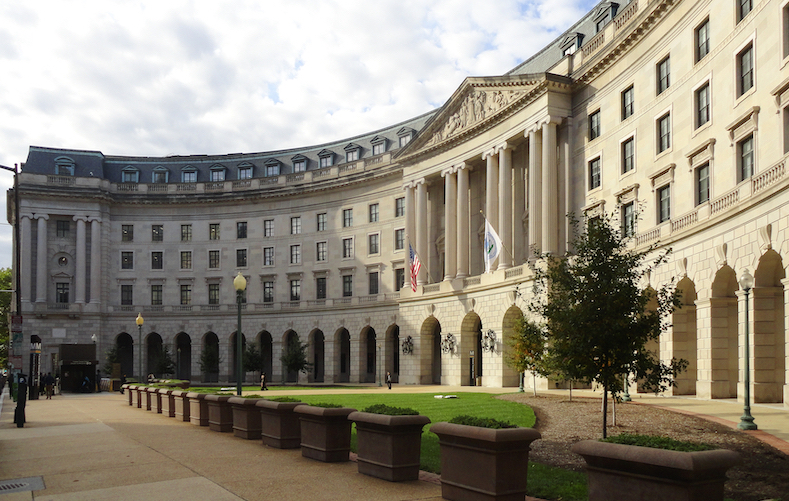 In 1962, the man who was to become famous as Senator Daniel P. Moynihan wrote his “Guiding Principles for Federal Architecture.” These mandated that “major emphasis should be placed on the choice of designs that embody the finest contemporary American architectural thought,” and that “Design must flow from the architectural profession to the Government and not vice versa.” What this goes to show is that very clever men may say some very foolish things, that are all the more dangerous because clever men are influential.

In effect, what the guiding principles did was to make the client the servant of the supplier, and the supplier the sole judge in his own cause. This, perhaps, would not have been so disastrous had the architectural profession been led by figures such as Brunelleschi or Christopher Wren, but it was not. Rather, it had long been hijacked almost entirely by ambitious followers and apostolic successors to the totalitarian modernists such as Le Corbusier who wanted to legislate architecture for the entire world—and succeeded in doing so to a remarkable, and horrible, extent, as a tour of world capitals will quickly and depressingly establish.

The squeals of outrage by the architectural profession at President Trump’s proposed executive order, Making Federal Buildings Beautiful Again, were entirely predictable. The order—if promulgated—makes the classical style the default for new federal buildings in Washington, together with a preference for classical and other traditional styles elsewhere.

This, said the architects, establishes an official style and therefore authoritarian or totalitarian in spirit. But the architects are mistaken on several grounds. First, federal buildings are a small minority of all buildings, and the order says nothing about how the other buildings should or must be built. Second, classicism in architecture is capable of almost infinite variation, such that uniformity will not result (no one has any difficulty in distinguishing the Jefferson from the Lincoln Memorial, for example, or from the White House). Third, it ignores the fact that, as a result of Moynihan’s Guiding Principles, there has long existed de facto an official style, namely that which the architects impose on the government at any given time, all of it in the modern idiom with its desperate and egotistical search for originality as a virtue in itself. Fourth, it ignores the historical, and in my view aesthetic, connection between modernism and totalitarianism. Le Corbusier was a fascist, Philip Johnson a Nazi, and Oscar Niemeyer (the architect of Brasilia) a communist. The totalitarian sensibility of much modernist architecture is to me so obvious that I fail to understand how anyone could miss it. For lack of any other means to achieve grandeur, it deliberately employs sheer size and inhuman coldness of materials to achieve prepotency, in the process reducing the individual to insignificance, as mere intruders or bacteria in a Petri dish.

Far from being dictatorial, the order is profoundly liberating for clients, architects, and public alike. One of the arguments of the ideological modernists, and of their disciples and successors, is that, irrespective of any results from an aesthetic point of view, technology has dictated from the end of the nineteenth century onwards that we simply cannot as once we did, or in the same style. But it is clearly not the case that moderns cannot build classical buildings of distinction: the Lincoln and Jefferson Memorials, and the National Gallery of Art, are by no means ancient, and there are people living who remember the time before the Jefferson Memorial existed. Rejection of classicism, or of any other style is therefore a choice, not a fatality.

The order will give renewed courage to patrons of architecture, who for a long time have been cowed by the architects’ mastery of high-sounding verbiage and gobbledygook to promote their inhuman work, so much of which these days looks like a snapshot taken of a huge shack in mid-collapse during an earthquake. Patrons, like the courtiers of the Emperor with no clothes, have hitherto been afraid to confront architects for fear of appearing ignorant and unsophisticated, but will no longer have to accept the dictation of architects. Examples will show that things can be done differently, that patrons do not have to accept what Thom Mayne, the architect responsible for some of the worst of recent buildings, called “demanding art-for-art’s-sake architecture that only other architects can appreciate.”

The order will also free architects and teachers of architecture from the groupthink which undoubtedly afflicts the profession, not only in America but in Europe and elsewhere. It will serve to increase, not reduce, choice, and with luck will restore public confidence in its own taste and right to pronounce on architectural matters, as well as its influence over what is built in its name. After all, it is the public that has to live with architecture. Architecture should not be a secret garden into the beauties of which only architects may enter.

There are no doubt potential pitfalls in the executive order, for example that classical architects will get the idiom wrong or try to subvert it by use of idiosyncratic or jokey details. But I have never seen a classical building remotely as ugly as Mayne’s Cooper Union, which looks like the interrogation center of evil conquerors from outer space. It would have been better if no reaction to the excesses of architects had been necessary. There is, in any case, no reason why good, humanistic classical buildings cannot be built: except, that is, for the arrogance, tastelessness, inhumanity, egotism, incompetence, persistence in crime and megalomania of the architects who want to show off to each other.

First published in the American Conservative.