A British-born member of the Islamic State execution squad known as “The Beatles” was told to “rot in Hell” as he was sentenced to eight life terms in a US court.

Alexanda Kotey, 38, originally from Paddington, London, was jailed on charges including hostage-taking and conspiracy to murder. 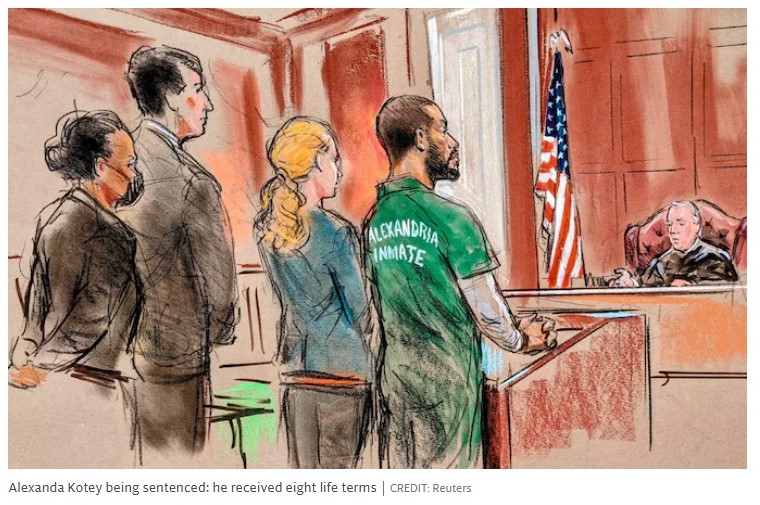 While he was led away Kotey was approached to within a few feet by Bethany Haines, daughter of the murdered British aid worker David Haines. She told Kotey: “I hope you go rot in Hell.”

In a statement 11-year-old Athea Haines, a daughter of Mr Haines, who was four when he died, said: “Sometimes I get sad when I see my friends laughing and playing with their fathers. It’s not easy to be the girl in school whose dad was killed by terrorists.”

In her statement Bethany Haines said: “I wake up during the night hearing my dad’s screams as he is being tortured by these men.” Addressing Kotey directly, she said: “The only thing you can do that would help the victims would be to give up the location of the remains of our loved ones.”

Kotey is expected to serve the first 15 years at a “supermax” prison in Colorado, where Abu Hamza is also held, before being transferred to the UK to serve the rest of his life in jail there.

Judge Thomas Selby Ellis said the crimes were “horrendous, egregious, violent and inhumane”. He told Kotey: “These weren’t prisoners of war, these weren’t soldiers in the field. They were soldiers, but soldiers for good, soldiers for selfless giving. The victims of the hostage-taking by Isis are undeniably heroes.

“You have the prospect, maybe, of going home to the United Kingdom in 15 years, that’s a pretty major plus for you. I hope you earn it, I hope it happens, but you’ll have to serve a life sentence.”

Kotey, an Islamic convert, was one of four men nicknamed The Beatles by their captives due to their British accents. His co-defendant, El Shafee Elsheikh, was also in court to hear the victim impact statements.

He will be sentenced on Aug 12 after being convicted of his role in the murder plot.