The Islamic State (IS) group appears to be stepping up attacks close to the border between Mali and Niger, with sources suggesting that the jihadists are trying to seize control of the border itself.

Amid proliferating jihadist activity, insecurity has racked the vast, semi-arid Sahel region just south of the Sahara for years.

“The Islamic State [group] is on the offensive since the beginning of the month of April in many places on the border between Mali and Niger,” FRANCE 24’s terrorism expert Wassim Nasr said. “They are trying to control this border.”

IS group has either seized control of or forced civilians to flee at least five towns on the Malian side of the border, Nasr said. “The first attack started in Anderamboukane [on the Malian side] in April, and the latest attack happened in Emis-Emis and Inekar [towns farther north], where the Islamic State [group] went from Inarabane [near the border] to attack those regions. […] We see clearly that they aim to control this area, which is rich in water but also in hiding places, because they are trying to anticipate what is going to happen next and they want a sanctuary in this part of Malian territory.” 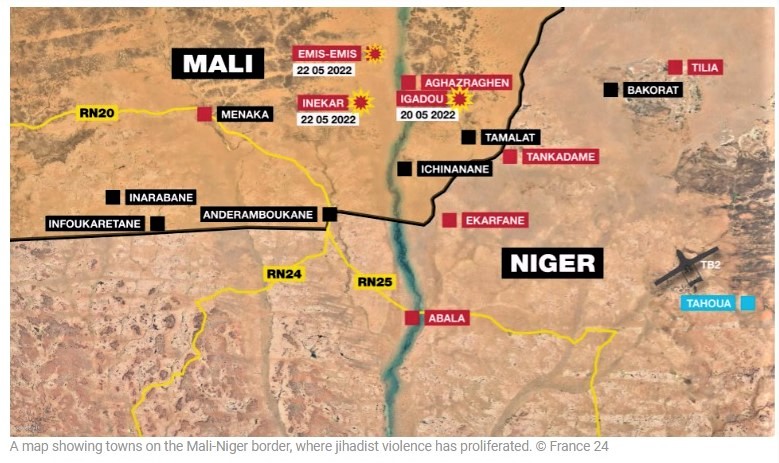 “There has been no reaction from the Malian government,” Nasr said. “and […] they even committed human rights abuses on civilian populations that were trying to escape the Islamic State [group].”

“The clear answer is coming from Niger […] [which] is confronting jihadist groups on several fronts,”