Italy and the Holocaust 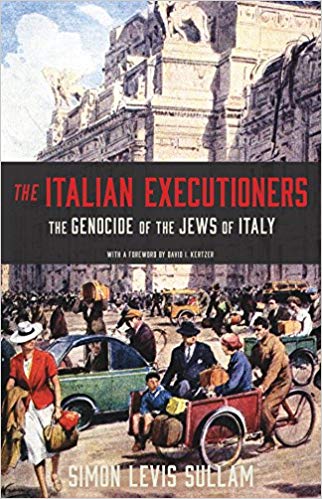 Two coins in the fountain of the historical analysis of Italy’s role in the Holocaust jostle for which one will be blessed. It remains controversial which one will be granted. The familiar and prevalent view is a positive one of the “good,” benevolent  and generous Italians, who sheltered Jews in their country from the “bad” German Nazis. This view is challenged in a brilliant and important authoritative new book, The Italian Executioners: The Genocide of the Jews of Italy, (Princeton University Press) written by Simon Levis Sullam, professor at the University of Venice. He regards the positive view as a myth and a misrepresentation of the reality. He contrasts the increasing attention paid to the Italian Righteous, of whom Yad Vashem in Israel names 671, with the neglect of the story of Italian executioners of Jews which should be placed in the forefront of the narrative. His main aim is to direct attention to the role of Italians in the genocide of Jews in Italy.

Jews have had a long history, uneven with long periods of persecution and discrimination, of relations with Italy. Simon Maccebeus sent an embasy to Rome in 139 B.C. to help the Romans in the fight against the Hellenistic kingdom. A Jewish contingent is said to have attended the funeral of Julius Caesar in 44 B.C. However, with the rise of Christianity as the official religion of the Roman Empire the position of Jews declined rapidly, especially during the papacies of Paul IV in 1554, Gregory XIII in 1577, and Urban VIII in 1625. Jews were segregated and obliged to bear a yellow badge of identification. The Ghetto set up in 1556 was finally abolished only in 1870 after Napoleon’s troops had opened it sixty years earlier.

Italy was the last Western European country to grant full civil rights to Jews. They became full citizens in 1861.  Assimilated, they entered the professions and the military. In 1910 the Venetian Jew Luigi Luzzatti became prime minister. There were 50 Jewish generals in World War I, and a number of Jews were officials of the Fascist party.

Sullam’s revisionist history recounts both the general story, and in detail the events in Rome, Venice, Florence, and Brescia, of the collaboration of Italians, from Fascist ideologues to ordinary citizens who played a role in the betrayal, arrest, and deportation of Jews to their death. The most common form of complicity was by informers.

The anti-Jewish campaign began on July 14, 1938 with a Racial Manifesto written and published by 42 well known Italian scientists and academics. It declared that Italians were descendants of the “Aryan race” and targeted other “inferior” races. It called for Jews to be banned from many professions and proposed their property be confiscated.  In October 1938 the Racial Law was passed, affecting the 47, 000 Jews in Italy at the time, of whom 9,000 were foreigners.

Among other things, the 1938 Law forbad marriage between Jewish and non-Jewish citizens. It forbad national offices, and private firms operating in the public sector to have Jewish employees. It forbad Jewish children  from attending Italian national schools. It reduced the number of Jews who could work in schools or in universities, and did not allow Jews to serve in the military.

Sullam challenges the view that Italians were victims of occupation, though they were defeated in Greece, Albania, Russia, and the colonies. On the contrary, they were not innocent, and Italian police, miltary police, customs officers, members of militia,  National Republican Guard, Fascist party, and informers, were part of the chain of responsibility in carrying out the arrests, imprisonment, seizure of goods, transporting, control of concentration camps such as Fossoli near Modena, the main transit camp in Italy, segregation, and elimination of Jews.

Benito Mussolini was not initially in favor of extermination, but rather the emigration and expulsion of  Jews, a task not easy because of the existing mixed marriages and social and cultural assimilation. Mussolini proposed a plan to imprison Jews in four labor camps, but he was not able to do this because he fell from power on July 25, 1943. However, after the Republic of Salo with Mussolini as prime minister was created in September 1943 an agreement was made with the Nazis to deliver Jews arrested to the Germans, who would subsequently deport them.

Nazis occupied the country on September10, 1943 and the first round up of Jews in Rome took place on October 16, 1943  when 1,270 were arrested, most of whom were sent to Auschwitz. Further arrests were by Italian police and fascists as in the raid on February 3, 1944 on the St. Paul’s Basilica in Rome, a raid approved by Pietro Causo, chief of police in Rome.

Sullam illustrates the anti-Jewish theories and propaganda in Salo. Jews were regarded as an enemy race,  the Protocols  of the Elders of Zion florished, and anti Jewish polemics were frequent  in the Fascist press, organs of militants, functionaries, and senior bureaucrats, in cultural reviews, and especially in education in schools and officers training.

Nevertheless, Sullam argues that the majority of those Italians were not necessarily ideologically motivated, but he indicates three figures who were active in this regard: Giovanni Preziosi, ideologist and propagandist, Giovanni Martelloni, bureaucrat and head of the office of Jewish affairs in Florence, and Giocondo Protti, radiologist.

Preziosi called for total elimination of the Jews, Martelloni personally carried out arrests and confiscations in Florence, Protti, as a doctor in Venice, called Jews the disease of humanity, and combined anti-Judaism with biological racism.

Besides the ideological factor, and a  bureaucracy carrying out orders, other factors were present:  pressure from superiors, profit, obedience, imitation, allegiance, desire for satisfaction or reward.

Sullam make an interesting point in comparative analysis. The overwhelming majority of arrests made in Italy by the Germans got organizational  support from Italians. But unlike the situation in Vichy France where the French government initially tried to  hand over only foreign Jews, the Italian fascists handed over Jews irrespective of whether they were nationals or foreign.

Sullam’s book is short but it is important both by its impressive presentation of factual, largely unknown material,  but also by its damning conclusion that Italy failed to come to terms with its complex  political and moral reponsibiities. No one was ever put on trial for participating in fascist policies, nor for the policies and actions of the Salo Republic.

The general persecution of Jews was not considered a crime or specific offense. A 1944 decree punished those who had committed violent crimes in the name of fascism or who had collaborated with Nazis, but 1946 an amnesty decree largely pardoned most of the 13,000 convicted or on trial. Some of those involved in racist legislation had distinguished post-war careers,  including Gaetano Azzariti , head of the Tribunal of Race, 1938-1943,  who ended his career as president of the Italian constitutional court in the1950s. The decree of the Communist leader and Minister of Justice Palmiro Togliatti in 1946 supposedly based on reconciliation of all Italians not only annulled most of the Fascist crimes but also  encouraged the myth of the good positive Italian and behavior. Sullam’s impressive book is saying arriverci to that mistaken view.