From The Times and Le Parisien

Police have told a French teenager to go into hiding after she received death threats for insulting Islam.

The 16-year-old has been advised to stay away from her lycée (sixth-form college) in southeast France after calls on the internet for her to be killed, raped or attacked.

The girl, named only as Mila, is understood to have been told by officials that she should avoid being seen in public until the controversy fades.

The girl, who lives in the Isère area near Lyons, and wants to become a singer, was sharing a live video on Instagram on Saturday when she became embroiled in a row with a male Instagram user making what she calls “heavy-handed propositions” online during her broadcast.

When she refused his sexual advances, he called her a “dirty dyke” and mentioned that he was a Muslim. She responded by saying that: “I hate religion. The Koran is . . . full of hate. There is only hate in it. Islam is a shit religion. That’s what I think.” The video has now been viewed more than one million times, provoking a vehement backlash against the teenager.

In a second video, after receiving insults and threats from several individuals, the tone rises even further with a surfer. “A guy started to get excited: to call us dirty lesbians, racists. Then the subject started to slide on religion, so I said what I thought about it. “

Since then, the young woman, targeted as a lesbian, is overwhelmed by homophobic, racist or sexist insults. “Go die in hell big dirty lesbian whore”, “dirty French”, “French shit”

The one who does not hide her ideas against the veil and immigration tells the Parisian that the girl’s parents asked her to remain silent. Pending in particular to find a lawyer. “His statements on Islam are a strict response to extremely violent lesbophobic and misogynistic harassment […] This is what a young girl risks in 2020 for having said no to a boy,” protests Solveig Mineo manager of the Bellica blog.

Marine Le Pen, the leader of the National Rally said: “We might find [the girl’s comments] vulgar, but we can’t accept the fact that some people sentence her to death for that in France in the 21st century.”  The Islamologist Rachid Benzine also regrets the extent of the Mila case, and the torrent of death threats that followed. “The expression is unhappy. But that remains a teenage word”

The prosecutor’s office in Vienne, near Lyons, said an investigation was under way to “find and to prosecute” the authors of the threats. A second investigation aimed to decide whether the girl’s comments constituted a “criminal offence” or fell within the definition of “free speech . . . [which] is a constitutional value”.

This week the hashtags #jesuismila (I am Mila) and #jenesuispasmila (I am not Mila) have been among the most popular on Twitter in France. 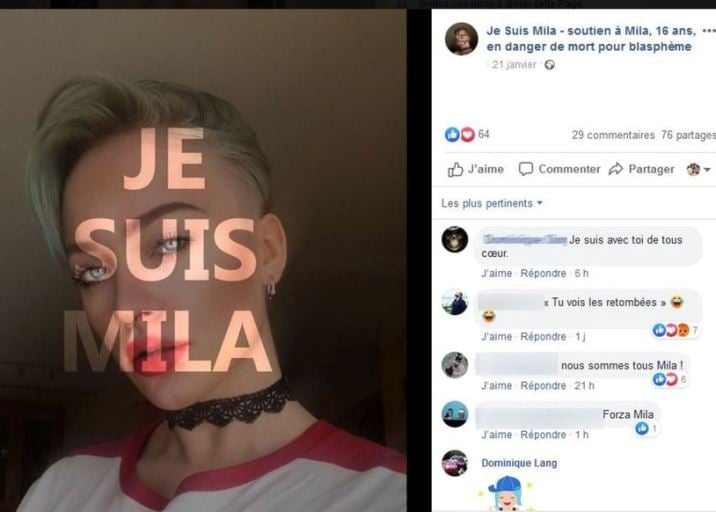