From News Hub of NZ

On Saturday, a group called Love Aotearoa Hate Racism organised a rally for the victims in Auckland’s Aotea Square.

Ahmed Bhamji, chairman of the Mt Roskill Masjid E Umar, gave a speech questioning where the gunman got his funding from.

“I really want to say one thing today. Do you think this guy was alone… I want to ask you – where did he get the funding from?” he can be heard saying in video footage. “I stand here and I say I have a very very strong suspicion that there’s some group behind him and I am not afraid to say I feel Mossad is behind this.” 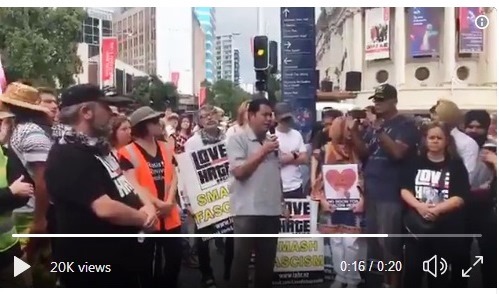 One person can be heard shouting in support: “It’s the truth. Israel is behind this. That’s right!”

The video of him saying this is in the Newshub report – I took a screenshot at the moment.

Several attendees at the event have already called out the event, saying they were “disappointed by some of the hate rhetoric”.
“The speaker talking about Mossad conspiracy theories already left me speechless,” one person wrote on the event’s Facebook page. “Mentioning Mossad was deeply, deeply disappointing. And pretty racist,” another person said. 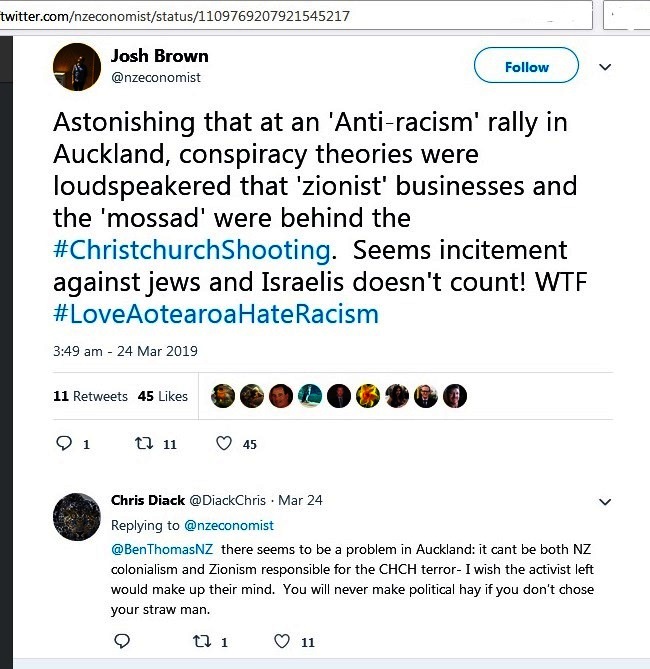 Looks like left-wing liberals are having trouble with the double think at long last.

Newshub spoke to Love Aotearoa Hate Racism co-founder Joe Carolan, who said Bhamji was one speaker out of 30 and there were many different points of view at the event.

When asked whether he agreed with or believed the theory that Mossad were behind the attack, Carolan told Newshub “absolutely not”.

“It is unfortunate that they did not appear to put its anti-racism message into practice, by challenging or condemning the racism in their midst,” she told Newshub. “We must call out hateful dehumanising language, whatever the source, target and circumstances, and even when it is not politically expedient to do so.” So she admits that political expediency gives Islam an easy ride.

Newshub contacted Bhamji, who accused Newshub of singling him out. “I made a statement, a lot of other people made statements,” he said.

He continued to defend his speech, saying we need an inquiry into where the gunman got his money from. He didn’t offer any proof to his speculation Mossad had given him it. “Mossad is up to all these things,” he said. “When I talk about Mossad, why should the Jews be upset about it? Give me an answer?”

It shouldn’t just be the Jews of New Zealand who should be outraged.

PrevThe William Barr Letter to Congress
A Muslim women’s network says an enormous donation for Christchurch victims from a Chinese delegation should be returned.Next