Karl was not as amusing as Groucho Marx 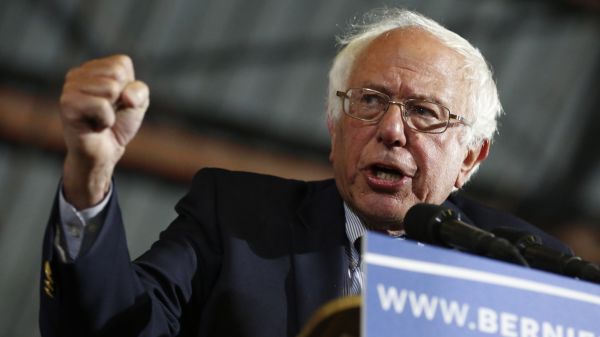 He sits and day dreams, he’s got day dreams galore. He may look like he’s obsessed and talk like he’s obsessed, but don’t let that fool you, he really is obsessed. Now that Bernie Sanders announced on February 19, 2019 that he is a candidate for president of the U.S. it is appropriate to examine the unacknowledged ideology propelling him as well as his own practical impact. In 2016 Sanders did gain more than 13 million votes in the Democratic primaries, to Hillary Clinton’s 17 million, and won 22 states. The self-described Democratic Socialist now informs the country that “we began the political revolution in the 2016 campaign and now it’s time to move that revolution forward, to implement the vision for which we fought.”

Sanders differs from the great Marxist, Groucho, whose revolutionary program was, “These are my principles and if you don’t like them, well I have others.” Sanders’ call for revolution is consistent, but it comes at a time when the memory of another Marxist, Karl Marx, the 19thcentury founder of revolutionary action to end capitalism, and founder of the communist movement, is less esteemed A few years this was different. In September 1999 the BBC News Online Poll on the question, “Who was the greatest thinker of the millenium,” reported that Marx was in first place, way ahead of ten others led by Einstein and Newton. How have the mighty fallen!  It is unlikely a Marx victory would be the outcome of a present poll as the desecration of his grave in London in February 2019 suggested.

The memorial to Karl Marx who was born in Trier, Germany, on May 5, 1818, who lived in London from 1849 until his death aged 64 on March 14, 1883, is located in a grave in Highgate cemetery in North London. His tomb was unveiled in 1956 by a group led by the General Secretary of the Communist Party of Great Britain. It has a tombstone that contains a large bust of Marx set on a marble pedestal.  On it are two quotations from Marx: “Workers of all lands unite,” the final words of The Communist Manifesto, he co-wrote with Friedrich Engels in 1848, and “The philosophers have only interpreted the world in various ways: the point is to change it,” the final line from Marx’s Theses on Feuerbach, written in 1845.

The Marx resting place, listed as a Grade-I monument, as are Kensington Palace and St. Paul’s Cathedral and thus one of the most important buildings in the country, is visited by thousands of people every year, and fresh flowers are always at the grave.

However, the lack of unanimous regard was shown twice in February, 4 and 16, 2019, when the monument in Highgate was attacked with a hammer, by a person or individuals trying to scrape or chip Marx’s name off the marble plaque on the tombstone which was defaced by red paint. Among the uncomplimentary words painted on the marble plaque were slogans such as “doctrine of hatred,” “architect of genocide- terror plus oppression, mass murder,” ” memorial to Bolshevik Holocaust, 66,000,000 killed,” “ideology of starvation.”

No one has yet been arrested or even accused of the atrocities which seem to imply seriously that Marx’s ideas are a threat to society, or less seriously that Brexit demands that Marx, born German, should be removed from the country as should all foreigners. Should Marx be praised or condemned? By coincidence, relevant remarks were uttered by Jean-Claude Juncker, Luxembourg politician, President of the European Commission, speaking in 2018 in Trier, Germany, at the 200th anniversary commemoration of Marx’s birth.

Juncker said Marx was a figure who shaped history in one way or another. He should not be judged for the atrocities that have taken place in his name long after his death, for things for which he was not responsible and which he didn’t cause. Curiously, at time of this particular meeting there was an unveiling of a 5.5 meter statue of Marx donated by the government of China. Trier, which politically has been dominated by Christian Democracy not Socialism, and is now a free market town, claims that 150,000 Chinese tourists visit the city every year. Marx after all is said to have inspired the Chinese Revolution, and creation of the People’s Republic of China in 1949.

After the Russian Bolshevik Revolution in 1917 many states adopted variants of ideas of Marx, whether as revolutionary, economist, or philosopher, as their official ideology, as did some Latin American leaders, Hugo Chavez, Evo Morales, Rafael Correa, and Daniel Ortega. But after the end of the Soviet Union in December 1991 only four countries, China, Cuba, Laos, and Vietnam, consider themselves Marxist. Even North Korea rarely, if ever, uses the word “communism” in reference to itself, nor do its leaders use Marxist rhetoric.

Yet the memory of Marx remains in many other countries, including Germany where he can be viewed in various places, including Berlin, Chemnitz (formerly Karl-M-Stadt until 1990) and Trier. In Trier there is now not only the large statue but also Marx-like figures in red and green lights for pedestrian crossings.

A dispute typical of difference points of view took place in 2018 in town of Neubrandenburg, a town in the former East Germany, a Marxist bastion during the Cold War when Marx’s face was on classroom walls and on monetary bills. With the fall of the Soviet Union the large bronze statue of Marx was dismantled and slept on the pavement for 16 years. The town’s Karl Marx Square has been renamed Market Square, now a shopping center glorying in free market capitalism. The town finally decided to get Marx erect again, but not in the central part of the city, or outside the public library, or outside the former Communist, Stasi prison. The ceremony was attended by 80 people.

Differences over whether Marx should be honored, disregarded, or minimized, are apparent in the leaders in contemporary China and Russia.

In China the memory of Marx, whose giant portrait dominated the stage, was honored on May 5, 2018 in the Great Hall of the People in Central Beijing. President Xi Jinping hailed Marx as the father of communism and the “greatest thinker of modern times.” History and the Chinese people choosing Marx was totally correct. Marxism, Xi said, was a tool to win the future, to analyze and solve practical problems. The scientific truth of Marxism, he continued, made it the theoretical base for modern international communist ideology. In terms that Bernie Sanders might admire, Xi praised Marx as the teacher of revolution for the proletariat and working people all over the world.

Yet doubts arise. Peking University, the most prestigious in China, on September 18, 2018 threatened to close its student Marxist society after its members supported protesting workers. This was surprising not only because it made known student and worker unrest in the country, but also because the University was a central player in the May 4, 1919 movement that opposed imperialism. The main protest leader later founded the Chinese Communist Party.

In apparent contrast to the Chinese leader, Russian President Vladimir Putin, once a believer in Marxism, appeared in 1991 to have renounced it, saying it was “nothing more than a beautiful and harmful fairytale” Without mentioning Lenin or Stalin, Putin remarked that action to put Marxism into practice caused “great danger to our country.” Washington. D.C. understands that Putin is a great Russian nationalist, not a Marxist.

But few in Washington perhaps not even Sanders, believe the capitalist system produces its own grave-diggers, the proletariat and that the victory of the proletariat is inevitable. Yet the Trump administration, dealing the complex problem of trade wars, might consider the Marxist quasi-anticipation, the advent of globalization: “In place of the old wants satisfied by the production of the country, we find new wants, requiring for their satisfaction the products of distant lands and climes.” Trump faces the irony  that the world’s main Marxist country ,China,  has cheap labor and so can engage in trade war with the United States.