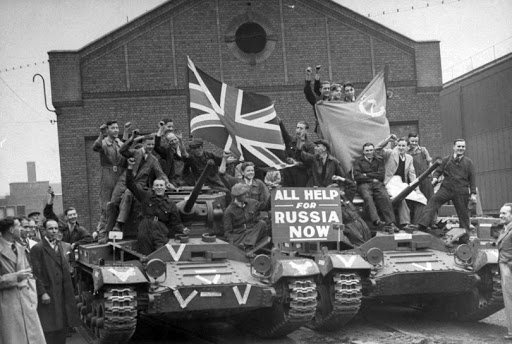 Here and there, everywhere, events we once knew, and they all just recall, memories of good deeds.

In view of present day antagonism and misunderstandings between the U.S. and Russia it is refreshing to recall the days when a somewhat more cordial relationship existed, and help was given to the Soviet Union by the U.S., and Britain. Two objects are reminders of the relationship. One is a monument in Fairbanks, Alaska, that honors the U.S. pilots who flew 8,000 planes to Alaska during World War II and the Soviet Union pilots who flew them on to Siberia. The other is the remains of a Douglas C-47 Skytrain transport aircraft which is being commemorated in Siberia.

It is time for a more complete evaluation of the vital assistance provided by the U.S. during World War II. Lend-Lease started in March 1941, providing for military aid to any country whose defense was considered vital to the security of the U.S. Originally intended to lend arms and material to the UK, then standing virtually alone, which agreed to pay funds back after the War, and which handed its gold reserves and overseas investments, the program was extended by Congress on November 7 to the Soviet Union which had been invaded by Nazi Operation Barbarossa on June 22, 1941.

Various accounts, including a valuable one by Robert Coalson, have calculated the extent of Lend-Lease given to the Soviet Union. The provisions include more than 400,000 vehicles, 14,000 aircraft, 13,000 battle tanks, gasoline, and explosives, thousands of radio sets and motor cycles, as well as food, blankets, machine tools, factory equipment and boots, The U.S. had provided 55% of aluminum, and 80% of the copper used by the Soviets.

An indication of the U.S. help is the story of a Douglas C-47 Skytrain transport aircraft which on March 12, 1943, was delivered to the Soviet Union, one of the thousands sent to it. After the war, on April 23, 1947 the C-47, then used commercially, made a forced landing, carrying 36 people on board, near the village of Volochanka on the Taymyr peninsula   in northern Siberia. The pilot and crew died when seeking help by walking to the nearest settlement, 100 miles away. Three weeks later, 27 of the people were rescued.

The plane rested for 67 years in the tundra before a Russian Geographical Society expedition found it in 2016. The plane contained U.S. made radio equipment and cans of corned beef. The plane was cut into pieces, lifted by helicopter, and put on a barge to Krasnoyarsk. This Douglas plane is the only Lend Lease aircraft that remains in the territory of Russia. The present proposal is that the wreckage of the plane, living history, will have a place of honor at a museum being built in Krasnoyarsk.

Not only was the fate of this plane unknown, but little was said by Russian leaders of Lend Lease. Soviet and Russian politicians, with few exceptions, downplayed or ignored , and still do, the extent of  assistance given by the U.S. and the UK during World War II to the Soviet Union. The usual version was that the Lend-Lease shipments were not significant and did not play a decisive role in the “Great Patriotic” war. They were not considered as having saved the Soviet Union from defeat by Germany.

Three exceptions are interesting. One is the toast by Joseph Stalin at the Tehran Conference with FDR and Winston Churchill, in November 1943. He told his fellow leaders to recognize “from the Russian point of view, what President Roosevelt and the U.S. have done for victory in this war. The U.S. is a country of machines. Without the machines we received through Lend-Lease we would have lost the war.”

A second mention is in the Memoirs of Nikita Khruschev who wrote, “If the U.S. had not helped us, we would not have won the war. No one talks about this officially, and Stalin never, I think, left any traces of his opinion, but I can say that he expressed this view several times in conversations with me.” A third appraisal comes from Marshal Georgy Zhukov who in a reported private conversation in 1963 said, “It cannot be denied that the Americans sent us material without which we could not have formed our resources or continued the war.”

A crucial part of the supplies to the Soviets were the Allied Arctic convoys and protection by squadron attacks on the heavy battleship, the heaviest ever built by a European country, the Tirpitz in its harbor in Altafjord, which was a threat to the convoys. At first, responsibility for getting supplies to the Soviet Union rested with the Russians. But the Soviet Navy did not have enough ships to do this and the convoys consisted mainly of British and American ships. These convoys experienced a dramatic struggle for survival in the Arctic.

Perhaps too little is spoken of their exploits but the Royal Navy and the Merchant Navy, at very considerable loss to themselves, played a crucial role in protecting the convoys with naval escorts of vessels carrying food, equipment, and raw materials. A major triumph was the sinking of the battleship Tirpitz in November 1944 by Lancaster bombers after it had earlier been damaged by UK mini-submarines and then by air raids on its shelter.

The largest and most valuable convoy was Arctic Convoy PQ 17, a fleet of 35 merchant ships bound for Arkhangelsk in July 1942, because German raids had destroyed most of the port of Murmansk. The convoy contained 300 aircraft, 600 tanks, and 4,000 trucks. In what Winston Churchill called “one of the most melancholy naval episodes in the war,” this Convoy became the victim of a disastrous decision by British Admiral of the Fleet Sir Dudley Pound. He had been an experience and successful commander in his early career, but was ill at this time. He ordered covering forces, protection for the convoy, to be dispersed for fear that the Tirpitz would leave its harbor and attack the convoy. In fact the Tirpitz remained in the harbor, but the  convoy was hit by Nazi aircraft and submarines. Of the 35 ships, 24 were sunk with a loss of 153 lives along with 210 combat planes, 430 Sherman tanks, and 3350 vehicles.

Both the U.S. and the Soviet Union were troubled. U.S. Admiral Ernest J, King, chief of U.S. Naval Operations, was for a time was reluctant to have British and American ships operating together. It was doubly unfortunate that the disaster happened on Independence Day, July 4, 1942.  The Soviet Union thought the Allies were lying. It could not believe so many ships could be lost in one convoy. In spite of Lend-Lease the Soviet Union never officially acknowledged either the heroic efforts of the Allied sailors and the Merchant Navy, which had done such a remarkable and courageous job in protecting the convoys, or more relevant the tons of supplies that arrived through its Arctic ports.  The convoys continued to the end of the war. Belatedly, a new medal, the Arctic Star, was created in December 2012, and 40 were honored a few months later.

It may be true that Lend-Lease did not in itself save the Soviet Union from defeat by Nazi Germany, but it did make a difference in the Russian ability to resist the Nazis. It is a minor step, but it is encouraging that a  Museum of the Allies and Lend-Lease located in a small school in Moscow has recently opened displaying various exhibits relating to Lend-Lease, such as Lucky Strike. According to the director of the Museum, Nikolai Borodin, Russian President Vladimir Putin at the Normandy anniversary of D Day spoke of celebrating U.S. aid. Now there’s a topic for discussion at the next summit meeting of Putin and President Donald Trump.