Locked down and let out: A tale of two cities hit by COVID-19’s second wave 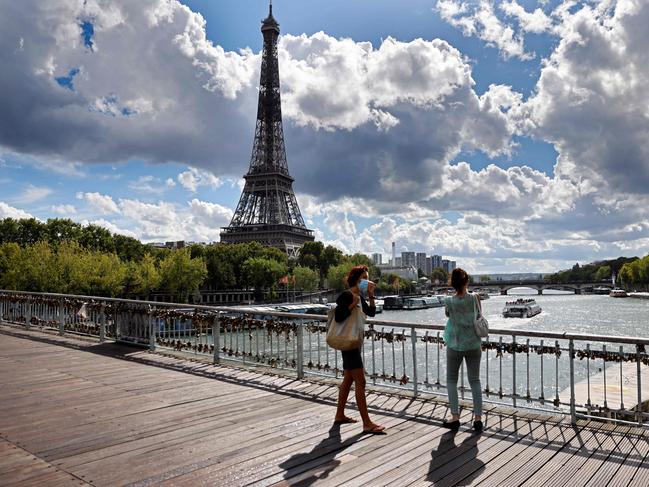 During the first lockdown in Paris the police and gendarmes were out in force, checking that everyone had filled in correctly the attestation de deplacement derogatoire (the self-filled form that gave the citizen the right to an hour’s exercise a day within a radius of 1km of his residence). I met a young man who was fined €135 for having put the wrong date on his paper, but — to be honest — he did not have the air of a fine, upstanding member of the community. When I was stopped, also with an error on my form, the policeman let me go: but I was wearing a tweed jacket, and bad men do not wear tweed jackets.

The second time around, the same document was required but no one bothered to check it: not a policeman or a gendarme was to be seen. Furthermore, unlike the first time, the parks and public spaces were open.

This difference did not go unremarked. It gave the impression that the government didn’t really know what it was doing: for if it had been necessary (following the science, of course) to close the parks the first time around, there was no reason it should not have been necessary the second time around, though the precise opposite was also a possibility. As to the failure to check the obligatory document, it gave the impression that the government was now afraid of the governed, who might not have acquiesced to control as meekly as they had at first. But a regulation that is not enforced, possibly because of fear, brings all regulation into contempt.

During the first phase of the pandemic in France, the wearing of masks was not obligatory.

The government said there was no evidence that they were effective, but it soon emerged that it was of this opinion not because they were ineffective but because there were none to be had. By the second time around, when masks had become available in abundance, the government changed its tune and made the wearing of them obligatory. The suspicion was, however, that the obligation to wear them in public derived more from their availability than from the scientific evidence that they were effective. A previous minister of health, after all, had been severely criticised for having bought 1.5 billion masks during a previous flu epidemic that turned out to be unnecessary (and were subsequently destroyed). If there is one absolute rule of government, it is that it is difficult for it to get things right, all the more so when it claims omnicompetence for itself.

Leaving Paris for a trip to Amsterdam, I had to obtain a certificate from the person who had invited me (which, in the event no one inspected) avowing that my presence at an event in Amsterdam was imperatively necessary. I confess that I had a pang of bad conscience on obtaining this certificate, since if there is one lesson my life has taught me, it is that I am never anywhere indispensable. However, on the train from Brussels to Amsterdam, which had come from London, I felt almost as important as Queen Victoria, being almost the only passenger on it. How delightful trains are when you have them to yourself! It reminded me of the time many years ago that I flew as the only passenger from Nauru to Singapore — several thousand kilometres — on a Boeing 737.

In Amsterdam, the regulations were slightly different from those in Paris: the shops were open in Amsterdam whereas they were closed in Paris, and there was no limitation on the time people could spend outdoors.

Why the difference? What was the scientific evidence that open shops in Amsterdam would not spread the virus in the way they would in Paris? Or was the difference that the Dutch have always been more attached to commerce (though not to money, the two nations being equally avaricious, differing merely in their ways of enrichment) than the French? If the two governments were guided by the science, the science told them different things. Alternatively, their different policies could have been an implicit recognition that science is not, and cannot be, the only determinant of policy.

The bars and restaurants in Amsterdam were closed, and there was none of the mass tourism (especially by fat, drunken Britons) that so detracts from the beauty of the old city. To walk beside the canals of Amsterdam, along which the domestic architecture is among the most beautiful created by mankind, without the ill-behaved and noisy crowds, has revealed to Amsterdammers just how vile a phenomenon mass tourism is. It also has made them think that possibly the open exploitation of young eastern European women (it used to be Colombians) in the red-light district, to which the regulations have put an end, was not the acme of enlightened social liberalism that was sometimes claimed for it.

There was a special regulation enforced in the hotel in which I stayed, which had a restaurant open only to the residents. At 8pm, the waiters started to hover around the tables, informing the guests that they must drink up, for they would soon have to withdraw their glasses containing any alcoholic drink. It reminded me a little of the six o’clock swill, of late lamented memory.

According to the regulation, no alcohol could be served or drunk after 8pm for the following reason: once the bars and restaurants were closed, but not the hotels, young people would book a room in a hotel where the bar was still open and hold a party in it. Rather than target a particular population, the government issued a blanket decree, perhaps because it would be easier to enforce both in practice and ideologically than one targeted specifically at young people.

Surprisingly for someone like me, who even as a youth did not much care for youth, I had some sympathy for the young would-be revellers. After all, the risk of the disease to them personally was minimal, probably less than when they drove. They were a risk to the old only if they mixed with them, and from my observation of the cautious behaviour of the old, the latter are sufficiently wary to be able (in most cases) to avoid contact with the young.

The Dutch government advised its population to invite no more than two guests at a time into their homes, but with my wife I was one of three at a dinner given by a Dutch friend. In Paris, by contrast, people were allowed no guests at all in their homes. Two friends of ours in Paris invited us to dinner nonetheless, but on reflection, and with our understanding, withdrew their invitation.

This was not from respect for the regulations, still less from fear of contracting the disease, but because the woman who lived in the flat above theirs, who is inclined to bitter complaint about trivia, might — indeed, was likely to — denounce them (and us) to the police. For a certain kind of person, there is no greater pleasure than causing neighbours grief in the name of good citizenship, and she, alas, was almost certainly of that kind. Moreover, a crime such as this dinner would have been was precisely the kind of crime that the modern bullying but ineffectual police like: easy to solve, the culprits most unlikely to present any danger, all nice and clean and open and shut. Therefore we decided that discretion was the better part of dinner.

Having mocked the regulations and criticised our governors, it would be reasonable to ask, “Well, what would you do in the circumstances?” This question, though reasonable, is distinctly killjoy, for one of the few pleasures left to us is complaint and criticism free of all responsibility. Without it, we would hardly know what to say to each other; it is to our minds what the hour’s exercise is to our bodies.

Like everyone else, I have become a profound expert in the epidemiology of COVID-19, and therefore have developed my own ideas about what should be done.

Of course, were I in power I should never have the courage to implement my scheme. If someone were to present me with evidence that the wearing of masks was useless, I would still advocate their use.

This is because, if it were later shown that this evidence was flawed (and science is not a fixed body of doctrine, after all), I would be criticised severely for not having obliged people to wear masks.

Far better, from the political point of view, to enforce a measure that is useless than failure to take one that subsequently proves useful. Therefore, there is an inherent tendency to the proliferation of useless measures.

Perhaps the vaccines will render all our problems as antique as the question of how many angels can dance on the head of a pin. But more than half of the French say they are opposed to vaccination.

As a graffito put it with eloquent concision on a road sign I once saw: “Non!” Whatever the question, the answer to it is: “Non!”

First published in The Australian.

PrevThe Undoing and Violence Against Women
John Brennan: Killing of Fakhrizadeh ‘An Act of State-Sponsored Terrorism’Next