From the London Evening Standard, The BBC, and The Telegraph

I don’t think a verdict of unlawful killing was ever in doubt. What is relevant is who the Coroner criticises or not, and the, in my opinion, very valid questions from the relatives of the victims.

The victims of the London Bridge terror attack were unlawfully killed, chief coroner Mark Lucraft QC has concluded. The coroner criticised the lack of barriers on the bridge in his conclusions, while the police investigation was “rigorous”.

He said there was an “arguable” case there had been a breach of an operational duty in relation to the police and MI5 investigation before the attack and a general breach of systems for protective security on the bridge.

The inquest heard how former London Underground worker Khuram Butt, 27, hired the Hertz van which ploughed into pedestrians on the bridge . . . The van crashed into railings and Butt, Rachid Redouane, 30, and Youssef Zaghba, 22, ran amok around Borough Market. They had knives strapped to their wrists and fake suicide belts.

The rampage which left eight dead and 48 seriously injured was over in just under 10 minutes. after the terrorists were shot dead by police marksmen.

The coroner … said he was “not convinced” MI5 and police missed any opportunities that would have prevented the attack. . . he would not be criticising MI5 and the police in his conclusions. (He) did criticise the lack of barriers on the bridge – a “particularly vulnerable” location. The attack, in June 2017, happened only two and half months after the Westminster Bridge attack.

But some victims’ friends and families remain critical of the police. Christine Delcros, who was severely injured and lost her boyfriend, Xavier Thomas, in the attack highlighted a “catalogue of failings”. Ms Delros said it was “staggering” that Butt, a “well known extremist”, was allowed to work within the London Transport network, and that “opportunities to identify all the attackers and disrupt their activities did not occur”. I can’t disagree with her.

Summing up evidence earlier, the coroner had said the family of attacker Khuram Butt were not “convincing witnesses” in court. He said each of Butt’s family members “accepted that they should now have done more at the time” and that they all “knew something of his extreme views”. Four of Butt’s family gave evidence during the inquest at the Old Bailey: his widow Zahrah Rehman, brother-in-law Usman Darr, brother Saad Butt, and sister Haleema Butt. I could make a case for trying them as accessories, or part of a conspiracy to commit terrorism. But that won’t happen.

Police have still not seen hundreds of WhatsApp messages between the London Bridge ringleader and an alleged extremist after he refused to hand over his phone, The Telegraph can reveal.

Sajeel Shahid, who owned the east London gym where the three attackers met, shared 329 texts with Khuram Butt in 2017 prior to the atrocity. As well as running the Ummah Fitness Centre, where Butt and accomplice Rachid Redouane worked, Mr Shahid also founded the Ad-Deen school, at which Butt and Youssef Zaghba, the third attacker, were allowed to teach children as young as three. The 43-year-old was accused of helping to train the 7/7 bombers in a 2006 trial, while MI5 told the London Bridge inquests he held a “strong historical extremist pedigree”, which he denies.

Police found records of 39 calls and 329 WhatsApp messages between his phone and Butt from January to May 2017, including several in the middle of the night. He agreed to allow officers access to his messages during evidence at the Old Bailey this week, saying he has “no issues” with that having not previously provided a statement in relation to the June 2017 attack.  However, several sources confirmed to The Telegraph that Mr Shahid had almost immediately rowed back on the offer he had made in front of victims’ families.

Helen Boniface, whose firm Hogan Lovells represented six of the bereaved families, told this newspaper: “The families are grateful to the Chief Coroner for issuing a witness summons to require Mr Shahid to attend court and answer their questions, but disappointed he refused to provide his phone to the police, despite stating to the court that he would do so, particularly considering that this phone was in regular contact with Butt in the months leading up to the attack.”

Mr Shahid’s refusal to cooperate lays bare a problem the security services have struggled to overcome in the aftermath of recent terror outrages – encrypted messaging. Butt and Redouane are thought to have been exchanging messages on the app from as early as December 2016, but they have not been recovered. It means that, more than two years after the van and knife rampage at London Bridge and Borough Market, MI5 are still struggling to understand how the attack was planned.

The authorities can drag Tommy Robinson through the courts as many times as it will take to get the result they want, but they can’t seize evidence in an investigation of an attack that took the lives of 8 innocent people and blighted the lives of 50 more. Shame on you. 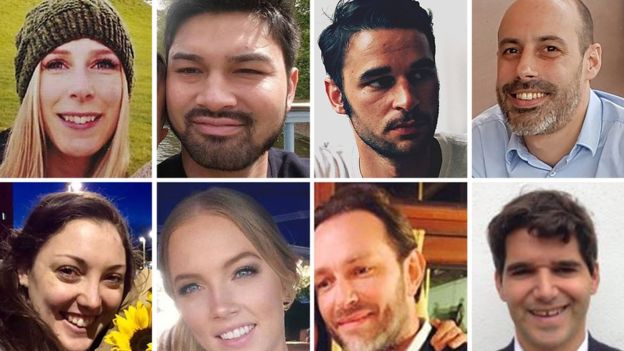 ..one of the officers who led the post-attack investigation was grilled during the inquests about why Mr Shahid was not arrested. Gareth Patterson QC, representing six of the bereaved families, asked acting detective chief inspector Wayne Jolley: “Why has this individual not been, if necessary arrested and interviewed under caution to see what, if any, knowledge or involvement he might have had in the attack?”

Mr Jolley replied the operation was “intelligence-led” and no information they received pointed to Mr Shahid, but they had made efforts to speak to him.

“I suggest you made wholly inadequate attempts and he should have been interviewed under caution,” Mr Patterson replied.

Police are facing questions over their failure to arrest Anjem Choudary in connection with the London Bridge attack after he allegedly incited the ringleader to commit carnage. The radical hate preacher was said to have been “idolised” by Khuram Butt, who parroted his extremist teachings in the years before the atrocity.

The families of several victims on Friday expressed their concern that Choudary’s radicalising influence had not prompted police action during the post-attack investigation. The inquests heard evidence that Butt would tell friends “Anjem Choudary is right” in saying money should be milked from the Government and used “to attack the British”.

Helen Boniface, whose legal firm Hogan Lovells represented six of the bereaved families, told The Telegraph: “The families we represent see this as encouragement to commit a terror attack on the West and are disappointed that it was not adequately investigated by the police as part of their investigation.”

Choudary’s alleged efforts to radicalise Butt seem to have taken place under the noses of authorities, when the cleric was on police bail for illegally drumming up support for Isil. It is believed Butt first came into the orbit of al-Muhajiroun (ALM), the banned Islamist group he helped lead, in around 2013.  Both men lived close to each other in the Barking and Ilford areas of London, with Choudary’s home just 350 yards from the gym where the attackers trained.

Butt went to dinner at the cleric’s house on at least two occasions – hosting him once in return – and was said to be “like a lion out of a cage” in his company. Friends described how Butt soon appeared “brainwashed” and espoused views about the West which were “completely off the scale”. He began referring to non-believers as “kuffars” and used to claim: “They should be scared of us.” . . . he would say, ‘Anjem Choudary told me – he does his research, he knows, bruv’… he’s our preacher.”

A spate of grim terror plots were linked to ALM supporters during the time Butt was associating with the group, including the murder of Fusilier Lee Rigby in May 2013.By September 2015, the focus of investigators finally alighted on Choudary, whom they arrested for inviting support for Isil. He was released on bail until the following August, when he was charged and remanded in custody until his conviction in 2016. In the period between arrest and charge, however, Butt was able to visit the home of Choudary on several occasions.

Defending the decision, Mr Jolley told the inquests the account of Butt’s friend was “hearsay” and not enough to secure a conviction.

But Ms Boniface said on Friday: “It is difficult to understand how Butt, the subject of an active MI5 investigation, associating with Choudary and other identifiable members of ALM, a proscribed terrorist organisation, could be of seemingly of little interest to the authorities, either before or after the attack, or even now.”

Choudary could not respond to claims as he is not allowed to speak to journalists under the terms of his licence.