From Talk Radio.
Pictures from friends who were there. The blimp was crowd funded after Sadiq Khan gave permission for a blimp of President Trump as a baby in a nappy to fly outside parliament during his official vist earlier this year. It showed Sadiq Khan wearing an itsy bitsy yellow, no spots, bikini, like the one worn by the model in the advert banned from London Underground in his first decree as Mayor of London. He looked rather fetching in it, in my opinion.

A blimp in the likeness of Sadiq Khan flew over Parliament Square on Saturday morning in protest against rising crime levels in London.

Yanny Bruere, who organised the stunt, told talkRADIO: “I crowdfunded to fly a blimp of Sadiq Khan and today we’ve done it, I think it’s gone to plan. There was a long process to get there, it’s gone well, it’s been a nice crowd.”

He said that he’d wanted to have victims of crime speaking at the event, but was denied permission by Greater London Authority (GLA) to have a stage.

“Today we had about 12 to 15 speakers lined up, but we were denied a stage, and it’s not quite fair on people who’ve been victims of crime to talk about their experience through a loud hailer. So what we’re looking to do is possibly do another event but also give them a platform further down the line.”

“First and foremost, Sadiq Khan’s approach to crime in London is very weak,” he said. “Stopping the stop and search has had disastrous consequences so we need to stop with the political correctness and make London safe again.”

In April, he told the BBC: “When stop-and-search is used properly, it’s an invaluable tool to the police, and we want more targeted, intelligence-led stop and search…
I am told that a good-natured crowd of about 400 people gathered. There was one counter protestor, who left quietly.

The window during which the blimp was allowed to fly was very narrow, two hours from half past nine, to half past eleven, earlier than the organisors asked for. Had the later time they requested been granted more people (including me) might have been able to attend.

As with the President Trump blimp there was a height restriction as well as the time restriction. However towards the end of the period allowed the organisors did release it a little higher. 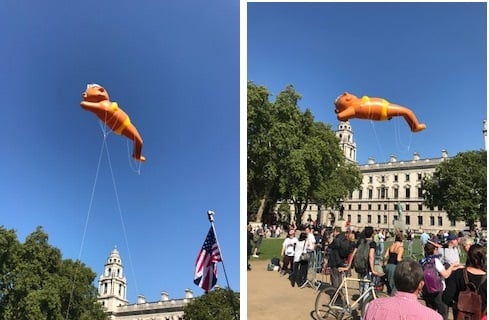 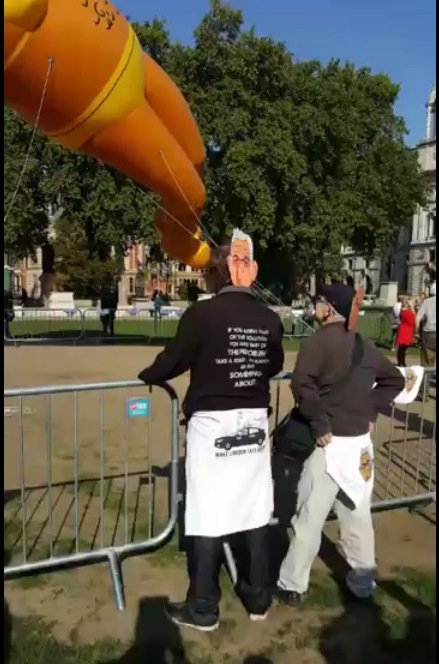 There was also some merchandise available, t-shirts with Make London Safe Again, and Sadiq Khan men’s novelty underpants. Only 114 shopping days until Christmas!