From the Jewish Chronicle and the Express and Star

“The three complainants not only were orthodox Jews but were clearly identifiable as such,” said the judge. “I am drawn to the inescapable conclusion that their selection by this defendant was not a coincidence.”

Abdullah Qureshi attacked two men and a 14-year-old boy as he walked through north London in August last year. 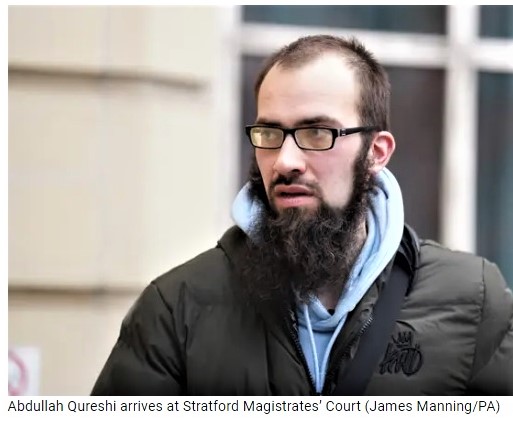 Officers found a message on his mobile called: “Dua for protection from your enemy.” A dua is a type of Islamic prayer. It said: “Oh Allah, we ask You to restrain them by their necks and we seek refuge in You from their evil”.

Qureshi had previously pleaded guilty to inflicting grievous bodily harm on Jacob Lipschitz and assaulting Chaine Greenfeld, without the religiously aggravated element, in pleas initially accepted by the Crown Prosecution Service (CPS). . . . the Crown Prosecution Service (CPS) reinstated charges of religiously aggravated assault despite initially claiming they did not have enough evidence to do so.

After travelling to London to visit his family, Mr Qureshi embarked upon a string of assaults against Jews.

At 6.40pm on August 18 the Yorkshireman hit a teacher in the head with a bottle while playing Arabic music from his phone.  At 7.45pm, Mr Qureshi slapped a 14-year-old boy as he walked to his Orthodox Jewish school.

45 minutes later, Mr Qureshi punched a 64-year-old man with such force that he hit his head on a wall and fell to the ground unconscious.  The victim, who was en route to a synagogue, suffered bruising to his face, broken glasses, a sprained ankle and multiple broken bones in his foot.

Prosecutor Varinder Hayes told Mr Qureshi: “You don’t like Jewish people. . . When you attacked those people they were in vulnerable positions, by themselves. They were standing, facing you in Jewish clothing while they were on their own,” she added.

Mr Qureshi insisted he was not antisemitic, and had attacked his victims at random after getting “wound up” by an argument in a shop.

A spokesperson for Campaign Against Antisemitism (CAA) said: “We are very satisfied that Abdullah Qureshi has been found guilty of the racially aggravated elements of his assaults.  This verdict begins to redress the serious harm caused to his victims and we expect the court to impose a sentence appropriate to the severity of his awful crimes. . .The CPS claimed that it did not have sufficient evidence to make out the antisemitic element of the crimes, but we disagreed and the court has now in effect found that we were right to do so.

“We are grateful to the CPS for making the case forcefully in court today and bringing about this outcome. The CPS must now recognise that victims of antisemitic crimes cannot be made to accept deficient legal outcomes.

Mr Law committed the case to Snaresbrook Crown Court for sentencing on December 8, granting Qureshi bail on the condition he does not enter the London borough of Hackney.