From the London Evening Standard and the Metropolitan Police news release.

A man who possessed “extremely harmful” ISIS manuals has been jailed, the Met Counter Terrorism Command has said. 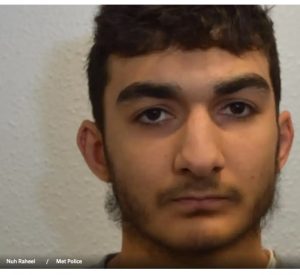 20, was jailed for three-and-a-half years in a youth offenders’ institution, with a one-year extended licence period.

In August 2020, the count terrorism unit discovered a digital account which held extreme Islamic literature. Further enquiries by officers confirmed that the account was linked to Raheel. During a pre-planned search of his Birmingham home in October 2020, officers discovered Daesh – Islamic State – publications on a phone which was hidden under a mattress. . . documents with information about the handling of weapons, how to kill another person, making “jihad”, producing explosives, and how to evade police attention.

At Birmingham Crown Court on 30 July 2021, he pleaded guilty to five charges of collecting information of a kind likely to be useful to a person committing or preparing an act of terrorism (contrary to section 58 of the Terrorism Act 2000).

Appearing at Leicester Crown Court on Friday, 20 May, Raheel was sentenced to three-and-a-half years in a youth offenders’ institution, with a one-year extended licence period.

In his sentencing remarks, the judge described the publications Raheel admitted to keeping as “chilling” and “dangerous”, and commended the work of the investigation team.

PrevMARIUPOL AND AFTER
Nigeria:Another Christian girl escaped death by whiskers in Bauchi State over alleged blasphemyNext