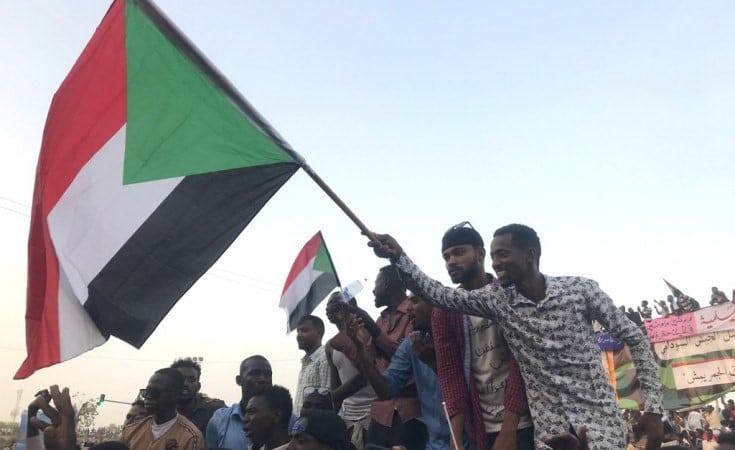 December 19, 2021, witnessed major Marches of Millions coming from across all states in Sudan. Marches protesters arrived in Khartoum from the state of Gezira came on foot. Another group from Atbara state came by motorcycles. Protesters demanded an end to military rule (“Liberate Khartoum”). These massive protests organized by the Resistance Committees called for a civilian-led authority, redress of the past injustices and removal of Generals Abdel Fatah al Burhan and his Deputy Mohamed Hamdan Dogolo aka Hemeti. The protesters’ goal is to achieve freedom, peace, and justice. Known to have hijacked the revolution in 2019, the Sudanese Professional Association (SPA) and Forces of Freedom and Change (FFC) were not the organizers of these latest Marches of the Millions protest but were part of the demonstrations. The protesters rejected the October 25, 2021, military coup that ended the partnership government between the Transitional Military Council and Forces of Freedom and Change that was established in 2019. The military junta also upended the promised transition to a civilian government that headed by Prime Minister Abdallah Hamdok. Further, the protesters categorically denounced the November 21, 2021, Hamdok – Burhan agreement with their slogans of “No negotiation, no compromise, no power-sharing”.

Despite Security forces using tear gas and stun grenades, protesters occupied the area in front of the Presidential Palace until they were dispersed by force. Protesters in Khartoum and other states are composed of the young people who do not have any partisan agenda to lead this movement. They have lost confidence in Sudan’s political parties and politicians who joined hands with the military and manipulated them for the last two years while failing to lead the country to a democratic transition. These massive protests on Sunday, December 19, 2021, reflected the determination of the Sudanese people, who, once again, refuse the return to military rule. The five million people who took to the streets across Sudan sent a clear message to the international community categorically dismissing statements by UN Secretary-General Antonio Gutteres and Resident Coordinator in Sudan Kardiata Lo N’diaye urging Sudanese to accept the Hamdok Burhan deal of November 21, 2021, legitimizing the military coup and return of military rule.

Sudanese political analyst, Walid Anor stated that Sudan is currently at a crossroads if not on the verge of collapse due to the great complexities of the political scene that question the future of the country. Anor also revealed the political forces that failed to resolve their differences during the last two years of the transition process. The Alliance of FFC and SPA made major mistakes, neglecting regions, distancing the Resistance Forces, and failing to embrace the Juba Peace Agreement. These factors contributed to the dismantling of the FFC. Mohamed Hamad, another Sudanese political analyst said that the Sudanese have failed in sixty years to build the state institutions and create a stable system of governance. Nonetheless, they are seizing this historical moment insisting on creating a government that would fulfill their aspirations.

The official Sudanese Medical Union (SMU) confirmed to the Sudanese Newsletter that three people were killed and more than two hundred others injured during clashes with security forces using live ammunition and tear gas. The security forces were trying to disperse thousands of protesters surrounding the Presidential Palace and other government facilities in the capital of Khartoum. Ihsan Faqiri, a member of the SMU, said that protesters shot with live ammunition causing serious injuries were hospitalized in the capital.

While the situation in Khartoum on Monday, December 20, 2021, was calm, the streets are crowded as security forces deployed tanks, closed bridges and the streets leading to the Presidential Palace and the Army Headquarters. The scene is one of complete stalemate waiting for the next Marches of the Millions protest scheduled for December 25th. Both General al-Burhan and Prime Minister-designate Hamdok declared that the document signed on November 21, 2021, would remain in effect for the transitional period until elections are held in 2023. These moves indicate that the military and Hamdok cling to their positions and will not relinquish power to a civilian rule as requested by the protesters. On the other hand, regional countries, notably Saudi Arabia and the Emirates, promised to provide financial assistance to the military junta. The political stalemate has been caused by these massive street protests demanding removal of the Military Junta. Prime Minister Abdala Hamdok has failed to form a technocratic government to implement the agreement made by him and Al-Burhan because of the lack of popular support.

This latest episode in roiling weekly protests since the October 25, 2021, coup by the Junta marked the third anniversary of protests on December 19, 2018, that led to the fall of the 30-year rule by dictator Al-Bashir and jailing in April 2019 with replacement by the Military Junta composed of his close collaborators, Generals Al-Burhan and Dogolo aka Hemeti, commander of the Jihadist, Arab tribal Rapid Support Force/Janjaweed militias.  These developments come amid evidence of the cruel deception by the military Junta with the recent discovery of mass graves of protesters amid a coverup perpetrated by the Rapid Support Force/Janjaweed.

There was also the ironic conclusion of an agreement between the International Committee of Red Cross and the Junta for “training” of the jihadist  Arab tribe RSF/Janjaweed in “human rights”.  Meanwhile, a team from the International Criminal Court (ICC) was in Khartoum seeking the extradition of imprisoned Bashir for the prosecution of both 2009 and 2010 indictments for both he and accomplices of the 2003 and continuing genocide against Darfuri and other indigenous peoples in Sudan for genocide and crimes against humanity.  In the month of December 2021, more than 200 have been killed in RSF/Janjaweed rampages in villages in West Darfur.  The toll in Darfur has surpassed reached over 600,000 killed, five million internally displaced to UNAMID camps, and several hundred thousand refugees who have fled to UN High Commissioner refugee camps in neighboring Chad, Central African Republic, and other Sahel countries. And yet, the collaborators of these calumnious actions against Sudan’s people, Junta Generals al-Burhan and Dogolo aka Hemeti, the latter controlling the RSF/Janjaweed forces continue to escape justice.

Claims about the purpose of the visiting ICC team, the signing of an agreement with the ICRC Sudan representative to train the RSF/Janjaweed Jihadist Arab tribal militias and a member of the Transitional Sovereignty Council Dr Al-Hady Idriss is currently in Darfur allegedly forming a mixed force to provide security for Darfuri are simply the Junta’s habitual propaganda. Throughout the history of Islamists rule in Sudan; whenever the regime committed atrocities and drew international community condemnation, they spread false claims that they are taking measures or doing something to prevent what happening. They are using media with false claims as propaganda to cover up their atrocities until the problem dies done.

However, this time the Junta’s coverup of atrocities was revealed because of internal disputes within the Transitional Sovereignty Council. Note the graphic evidence of RSF/Janjaweed brutality in the following discussion on Sudanese social media on December 13, 2021, translated from the Arabic into English. According to the writer’s statement there was a dispute between Lieutenant General Yasser Al-Atta, who is a member of Sudan’s Transitional Sovereignty Council, and Deputy Chairman General Mohamed Hamdan Dogolo aka “Hemeti.” Al-Atta revealed the location of a hidden mass grave site located in Jebel Al-Markhayat (Mountain) about fifteen kilometers north of Omdurman. The grave is believed to be of protesters killed during the Army Headquarters protest sit-in on June 3, 2019.

“A large force of heavily armed RSF/Janjaweed unit expelled the police force that was guarding and controlling the grave of martyrs of the 2019 protest sit-in. The sources indicated that a person who leaked the news of the mass grave was a senior military leader of the Sudanese Armed Forces (SAF) in the Transitional Military Council.”

“This followed disagreements between General Dogolo aka Hemeti and General Yasser Al-Atta who revealed the location of the mass grave of the martyrs of the revolution in the Al-Markhayat Mountains. When Hemeti learned from the media that the police surrounded the area in the presence of a public prosecutor from the Public Prosecution Office; he ordered his RSF/Janjaweed forces to expel the police and the public prosecutor. After the first body of a fully clothed woman was found, the Janjaweed took control of the gravesite. The Director-General of the Police called Yasser Al-Atta seeking help, but Al-Atta advised the Director-General of the Police to contact United Nations Mission in Sudan (UNMIS) because of restrictions prohibiting the movement of SAF forces from the Kere Garrison. The armed forces had moved a huge force to the Ethiopian borders. According to the Sudan News Agency, the Police Chief met with the General Manager of the UNMIS.”

[i] Lt. Gen. Abakar M. Abdallah is chairman of the Sudan United Movement (SUM). He is a native of Kutum, North Darfur, who served as a senior intelligence officer, and a Pan Sahel Counterterrorism unit commander in the Republic of Chad Army. He is a graduate of the US Army Intelligence and Security School and the US Army War College, and co-author of Genocide in Sudan: Caliphate Threatens Africa and the World.

Jerry Gordon is a senior editor at New English Review, co-author of Genocide in Sudan and former producer/co-host at Israel News Talk Radio -Beyond the Matrix.