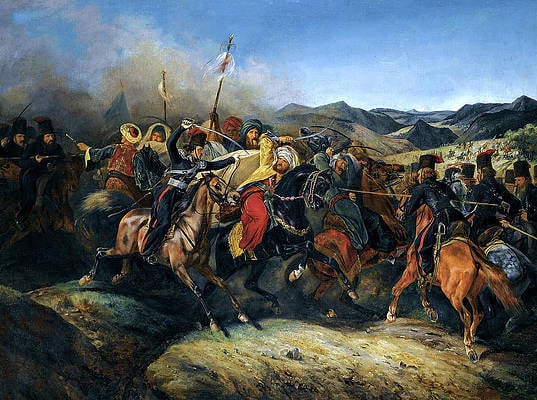 The fall of Mariupol, and the surrender of the many Ukrainian troops in the Azovstal steel-works, closes the current phase of Russia’s advance along the southern rim.  It will continue.  Mariupol is a way station to Odessa, and the Russians have now mastered the opposition en route.  They will extend their southern rim, and beyond Odessa will surely plan to take Izmail on the Danube. Izmail is not far from the mouths of the Danube on the Black Sea, and it has a huge resonance in Russian history.

Suvarov won his greatest victory against the Turks in Izmail, a fortress thought to be impregnable.  In 1790 he was ordered to take it and did so, after great slaughter on both sides.  The storming was described with immense verve by Byron, in Canto VII and Canto VIII of DON JUAN.  Byron was then the most famous man in Europe after Napoleon (whom he much admired), and his best-seller poetic travelogue DON JUAN was all the rage in British and Continental bookshops and studies.  He gives full weight to the valour of both sides, Russian and Moslem, in the battle, and lists by name a dozen heroic Russian leaders. For Suvarov, after a delightful cameo (LVIII) he reserves this final, strictly accurate tribute:

For Timour or for Zinghis in his trade,

While mosques and streets beneath his eyes, like thatch

Blazed and the cannon’s roar was scarce allay’d,

With bloody hands he wrote his first despatch;

And here exactly follows what is said:–

“Glory to God and to the Empress!” (Powers

Eternal! Such names mingled!)  “Ismail’s ours”.’

To our day.  Izmail is in the Odessa oblast, and is in Moldova.  The inhabitants must shrink at the prospect of the Russian advance upon their city.  When the Tsar orders it, it will be done.  They should above all fear the help promised them by Liz Truss, who in the Telegraph (21 May) has this front-page headline:

Alas, poor Moldova.  Liz Truss, the British Foreign Secretary, is the La Pasionaria of Ukraine.  It is already said that Britain will fight to the last Ukrainian; the last Moldovan may now be added to that melancholy list.  But this is still the British state policy, and its narrative is observed with soldierly discipline by the media.  Lately I read two articles in the Guardian strongly critical of the Government’s policy, one of them from a Moscow correspondent and the other from the rightly distinguished Sir Simon Jenkins.  When I tried to re-read the articles a couple of hours later I found that both had been pulled. It’s a curiosity of the world that Britain, which ceased to be a home of free speech long ago, contrasts painfully with Russia where criticism of Putin’s policy is public and rampant.  We await the next phase of Putin’s intent to make the Black Sea a Russian lake.