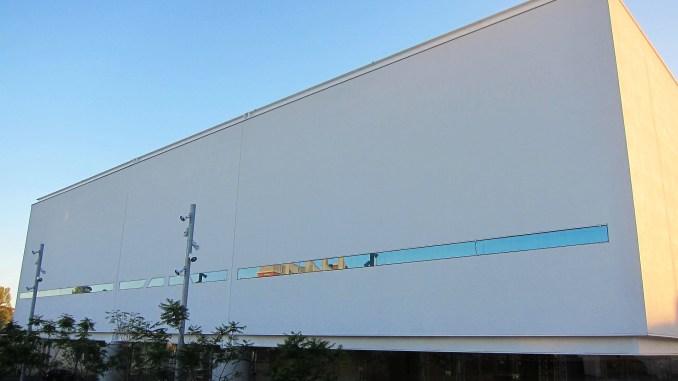 Modernist architecture is inherently totalitarian: it brooks no other, and indeed delights to overwhelm and humiliate what went before it by size and prepotency, or by garishness and the preposterousness which it takes for originality, and which turns every townscape into the architectural equivalent of a Mickey Finn.

In the Guardian newspaper last week, its architectural correspondent wrote an admiring article about Paulo Mendes da Rocha, whose work is so bad that he has been awarded the Royal Institute of British Architects gold medal. No greater insult could well be imagined for an architect than that; and a small photograph accompanied the article, of a raw concrete sports club blackening horribly with age, as it always does, demonstrates that he well merited it.

The article begins by quoting the 88 year-old Brazilian: ‘All space is public. The only private space that you can imagine is in the human mind.’

The architectural correspondent, Oliver Wainwright seems to accept this dreadful dictum without comment or criticism, indeed appears to find it inspiring, though it is difficult to follow his thought processes:

It is an optimistic statement, given that he is a resident of São Paulo, a city where the triumph of the private realm over the public could not be more stark.

Why is the inherent, apparently ontological, impossibility of privacy something to be welcomed? Does Mr Wainwright defaecate and make love in public, and if not, does he want to? Besides, da Rocha didn’t way that all space ought to be public, he said it is public, it can be no other.

This kind of balderdash, of no possible denotation but with plenty of nasty connotation, is typical of writing about architecture, at least by apologists for modernism. It comes as no surprise to learn that da Rocha is a Marxist, though he could just as well be a fascist, as was his architectural ancestor, Le Corbusier.

Nowhere in the article is there an aesthetic judgment of the work of a man who ‘has spent his 60-year career lifting his massive concrete buildings up,’ which, by description, sound equally horrible and inhuman. This is a world in which the word brutalist can be used as a term of approbation. The nearest the writer comes to criticism is when he say that the architect’s unbelievably hideous building for the National Coach Museum in Lisbon near to ‘the gothic confection of the Jéronimos Monastery’ (note the disparagement) is that ‘it feels a little out of place – a great white aircraft hangar jacked up on fat concrete columns.’ He adds, ‘Still it might soften with time and use.’ It seems to have escaped this critic’s notice that concrete does not improve with time, and he does not explain how use can soften fat concrete columns.