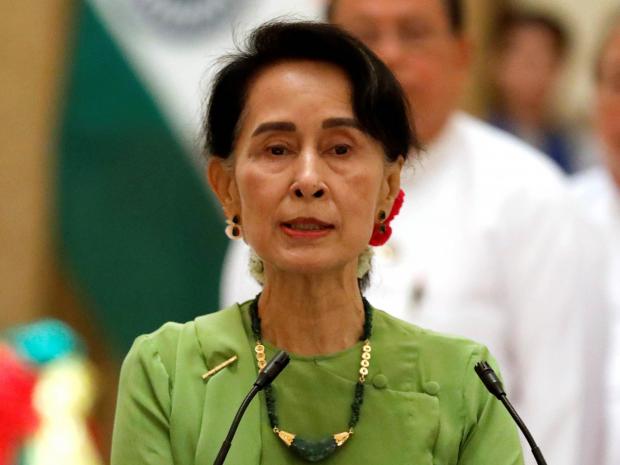 Putting power above principle is a customary occurrence in the political world. So is the emergence of the lost leader, who as Robert Browning wrote in criticism of Wordsworth’s change of political views after accepting a public office, “just for a handful of silver he left us, just for a ribbon to sick in his coat.”

Nevertheless, it is surprising that this censorious comment should now be made of Aung San Suu Kyi, a lady, until recently universally admired and compared in equivalent way to Gandhi and Nelson Mandella, symbols of defiance against oppression and fighters for independence. Aung San Suu Kyi, the Burmese, now Myamar, heroine, is the intelligent, articulate, photogenic daughter of an independence hero who was assassinated in 1947, who was educated at Christian schools and at Oxford, long married a to a British academic now deceased, has been a  familar sight with her sarong and jasmine flower in her hair .

For her courage and bravery, she was awarded the Nobel Peace prize in 1991, and given the Elie Wiesel award, its highest honor, by the US Holocaust Memorial Museum, in 2012. Today, her reputation is less impressiove now has had a short honeymoon as a wielder of governmental power, and forced to face internal crises to which her response has been inadequate.

Strong criticism of her recent behavior has came from many quarters, the United Nations, Turkey, Indonesia, and the Dalai Lama, but expectly forceful from another highly respected and revered individual. The 85 year old Archbishop Desmond Tutuspoke spoke stongly to his “dear beloved younger sister,” the 72 year old Kyi , commenting on the unfolding horror, slow genocide, and ethnic cleansing of the Rohingya, the Muslim minority living in the Rahkine region of Myanmar, and called on her to criticized and to end the military operations aginst that community. Hitherto, by her courageous stand and personal sacrifice against the forces of injustice in her country Burma, now Myanmar, she had symbolished righteousness.

Indeed, Kyi was renowned for that courageous stand and righteousness against the dictator, General Ne Win, and the military junta that ruled the country, 1962-2011. As a result of her opposition to the regime that suppressed all dissent, she was put under house arrest for 15 years, and was regarded as the symbol of opposition to military rule and oppression.

Archbishop Tutu’s  comment is devastating arguing that it is incongruous for a symbol of righteousness, now that she has power,  to lead a country, if the political price of her ascension to the highest office in Myanmsr is silence: the price is surely too steep.

The Rohingya community, numbering 1.1 million, live in the western Rakhine state of Myanmar. A group within it,  the Arakan Rohingya Salvation Army (Arsa), a group that began operating in October 2016,  using knives and bombs,  attacked 30 border posts and an army base on August 25, 2017 , killing 12 police which led to severe retaliation, a clearance operation,  by the military forces of Myanmar. The military attacled and burned villages and targeted civilians. The result so far has been the killing of hundreds but also “ethnic cleansing” and the exodus of more than 270,000 refugees from the Rohingya Muslim community fleeing to Bangladesh. For observers this can be considered as crimes against humanity.

For outsiders this prompt the question, are government authorities encouraging the fleeing? It does appear that they are allowing  and perhaps encouraging the fleeing in order to get rid from  the Rakhine state of as many Rohingya as possible. It is unlikely they will be allowed back into Myanmar. Already, after fighting in October 2016, nearly 100,000 Rohingya were forced to flee into Bangladesh where there are more than 400,000 refugees .

In the 2015 election , the first openly contested election in 25 years, Kyi’s political party, the National League for Democracy, won enough seats to form a government.

Kyi is unable to be president of the country for technical reasons. By the constitution she is  barred from that position because she has children who are foreign nationals and hold British passports. Ki,”the Lady'”, as she is popularly known, has the role of State Counsellor, in a sense above the official president, Htin Kyaw, the first civilian president of the country.

What is surpring is the silence or mild apologetics of the renowned Aung San Suu Kyi who has not exercised sufficient desirable influence to restrain the military which claims it was getting rid of terrorists among the  ethnic Muslim population. The government, Kyi says, still needs to decide how to differentiate terrorists from innocent people. The existing problem is whether Arsa is protecting the minority, or is a terrorist organization, The leader of Arsa. a man named Ata Ullah, was born in Pakistan, was raised in Saudi Arabia, and claims not to be linked to jihadist groups.

Kyi said it was unreasonanle to expect her to solve the issue in 18 months. The problem she explained, goes back to pre-colonial times. She defended her inaction, “our resources are not as compete and adequate as we would like them to be  but still we try our best and we want to make sure that everyone is entitled to the protection of the law.” This is disingenuous. The Rohingya, who speak a language similar to Bengalis in Bangladesh, are not regarded as citizens, but as illegal immigrants, nor are they recognized as an official ethnic group, but are restricted in freedom of movement, medical assistance, education, and basic services.

Somewhat surpringly, Kyi also condemned the international news coverage of the crisis, especially the “fake news and fake photos,” and the “huge iceberg of misinformation.” Amusingly, one of the “fake photos” is one of Sylvester Stallone dressed as Rambo in the film Last Blood, fighting his way, not as Rocky in the ring in Philadelphia, but through the jungle.

Kyi’s refusal to condemn the military has led the disenchanted to ask, “Should she return her Nobel Prize?” Already more than 400,000 have signed a petition that it should be taken away. She, certainly according to Archbishop Tutu, has not spoken out for justice, human rights, and unity of her people, as Nobel laureates are supposed to do.

The conclusion must be that Kyi had and still has a moral duty to speak up for jusice and righteousness as she did in the past. The middle course and equivocal language is not appropriate. For the moment, at least, she has lost her pinnacle as a moral icon.

PrevRacism is dying, yet hateful people are still frequently accusing non-racists of it
On this 16th Commemoration of 9/11: Are we safer from Islamic Terrorism?Next